When my daughter was a baby, people often gave me compliments on how well she was doing. Every wave or smile was like an extra bullet point on my parental resume. In my eyes, and perhaps the eyes of others, her victories were also my victories. Olivia did all sorts of baby tricks, like high-fiving and wobbling across the floor while visitors applauded in amazement and credited her success to my parenting skills.

On the rare occasion our little superstar would slip up, those same guests offered fresh ideas to get her on course, often citing real life examples from raising their own children. These well-wishers gave us parenting tips to make our smooth sailing even smoother. Most times, they were ideas we had never considered and helped with whatever small issue we had.

While my daughter hit all of those milestone check boxes either right on time or ahead of schedule, my son didn’t. As a 7-year-old nonverbal boy on the autism spectrum, Lucas has had a very different story.

Those early moments of baby-performing we had relished just a few years earlier with his sister, were now gut-wrenching pressure auditions for loved ones. We’d all stare for what seemed like an eternity, waiting for my son to do that wave I was absolutely positive I saw him do last week. They’d hold their hands out patiently for high-fives that didn’t happen or words that weren’t said. I had done nothing wrong, but at the time, their confused glances sure made me feel that way.

Rarely does anyone say anything about autism suspicions or learning delays when talking to a parent. Most friends and family will avoid it all together in favor of, what I can only imagine feels like, a better option to discuss.

They imply you’re doing something wrong and offer advice to correct it.

While not said with intentional malice, their words only solidified the misplaced feelings of responsibility I had been battling in my brain. Now keep in mind, parenting tips aren’t exclusive to a child with delays. As I mentioned, we heard suggestions for my daughter, too. The difference, though, was that these unsolicited pieces of advice, since dealing with a situation many parents can’t relate to, were often so basic that they felt insulting. They weren’t unique secrets about putting VapoRub in the humidifier or mashing up hidden vegetables in a toddler’s dinner. These were things like this:

The sad part is this statement isn’t said in an cruel way. It’s presented as genuine advice, even though common sense would tell you that it would be infuriating. The basic idea here is that I talk to my son so little that he hasn’t heard enough words to start speaking them yet. Wow, right? Sounds rough when you put it like that.

The most infuriating aspect of this particular piece of wisdom is that it’s the polar opposite of the truth. I actually babble on to Lucas so much, that I wind up talking to him in his sleep. I’m not using a figure of speech either. I literally talk to him in his sleep. Strolling through a Target or driving with him in the backseat, I will carry on a lopsided conversation nearly the entire time.

“Hey. Lucas. Luuuuucas. Hey. Look at that, buddy. I used to hang out down the block when I was a kid. You see that? We’re driving past it now. Look. See? Wave. Hi! Maybe we’ll get lunch. What do you want to eat? We’ll get you something good…”

It goes on from there. He can’t tell me to shut up, so I just drone on to him about everything and anything. I’ve done it since the day he came home from the hospital and continue to this day. I tell him stories from my childhood and thoughts about pop culture. I sing him songs and complain about people who annoy me. I say it all, and Lucas listens to it all. 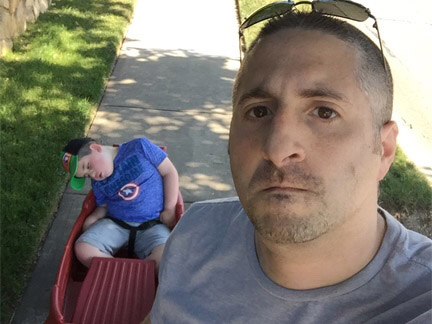 Yeah, and Lucas sleeps a lot, too. It’s kind of his gimmick. Mid-sentence, I’ll glance down at him in a shopping cart and, while I see that he’s passed out, won’t let it stop my on-going narrative.

I speak to Lucas more than pretty much anyone else in my life. Our conversations may be mostly one-sided, but they happen and I enjoy them. I know it’s helped him learn and grow, but that’s not the main reason why I speak with him so much. Sure, it’s a great perk, but I would talk to him no matter what. I do it because I want to. He’s my son and I love him.

The thing that people need to understand is that parents of kids with autism have most likely done much more research on autism than you can imagine. We read and ask questions constantly. Raising a child on the spectrum is a new experience for many, and when it affects your life, it brings a world of knowledge to learn with it. I’ve read a lot about autism since my son’s birth, but still stand in awe of the insight that so many other parents of kids on the autism spectrum and professionals possess.

It’s doing all that research and then being told that, “you just have to talk to him” by someone who has not that can feel like a slap across the face. It’s like wandering into a room full of perplexed mathematicians trying to decipher an unsolvable formula they’ve devoted their lives to, you look at the cluttered whiteboard of numbers and suggest, “You know what you need to do? Math. That’s the key here. Addition is a good one. You can do subtraction, too. Have you tried all the maths?”

They’re doing math. I’m talking to my son. We got it.

In my life, I’ve never asked anyone how to “fix” Lucas or where his autism might have come from. Yet, I’ve been presented with many opinions about both. If my response to those people seems defensive, then that’s probably because it is. Any parent, whether their child has autism or not, would react strongly to a comment that implies their kid needs to be repaired. That’s just common sense. My kid’s not broken. In fact, my kid is perfect. If reminding people of that is considered “defensive,” then I’ll happily be defensive for the rest of my life. 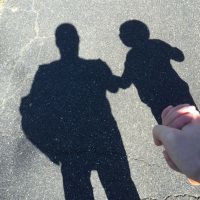