How I Fight Mental Health Stigma in Casual Conversation

It starts out as a very simple question: “What do you do for a living?”

My answer is much more interesting than most. The look of surprise on people’s faces when I tell them I work at an inpatient psychiatric hospital always catches me off-guard. And the next sentence someone says is always the same:

“Oh, you mean with all the crazies/psychos/wackos/schizos etc.”

This is the part of the conversation that always makes my blood boil. I can feel my face go flush. I am furious. The fact is: this response to learning what my job is shows just how serious mental health stigma in our society is. These individuals, typically strangers in the grocery store or at the bank making small talk with me, think nothing of using these terms to describe people with mental illness. These terms are derogatory, demeaning and disrespectful. I’m sure most of these individuals are genuinely good people, and I’m sure they mean no disrespect. They don’t see using language like this as a problem because society has taught them it isn’t a problem, that this is the proper way to describe someone who has a mental illness.

Even though I am enraged by this, I do not let my emotions take control. I usually smile, and very politely say: “Well, that’s not what we call them, but yes, I suppose.”

Now they are caught off guard. The guilt they feel shows immediately on their faces as they realize what they’ve done. And just as their response was so natural and calm, so was mine. They are usually very apologetic, saying things like “That’s not what I meant,” or “Well, that’s not really how I think of them.” They are trying to make up for the wrong they have done. I understand that. I do not hold their comments against them, and I am not judgmental. The real problem lies with the fact they did not see this as an inappropriate response until it was pointed out to them.

Having a mental illness comes with its fair share of challenges, no matter what diagnosis. But one challenge we all face is stigma. Mental illness is not perceived in society the way physical illnesses are. It is seen as different, a flaw in character, a choice, something that can be controlled. It’s not. Society views mental illness this way simply because they are not educated about it. It isn’t people’s faults they use these terms. Many times, they’ve just never been aware they are wrong.

The best way to fight stigma is simply through education. Someone cannot refer to something correctly if they are not properly educated on it. And when it comes to mental health, education to the general public has been lacking. That is why it is up to each of us to do our part to correct individuals and educate. People do not like to be wrong and do not like their wrongness to be pointed out, especially when they realize they’ve offended someone without meaning to. But that doesn’t mean we shouldn’t correct others when they are wrong.

It is always important to do the right thing, even if it may be unpopular.

I feel responding this way to people who use terms like these to describe mental illness is the right thing to do, even if it does make for an awkward situation. Because it’s important; because maybe my comment will make them think twice about the way they view mental illness. Or maybe it won’t. But if I say nothing, if I completely ignore the comment, then there is a 100 percent chance nothing in their viewpoints will change.

When someone refers to individuals with mental illness using derogatory, insulting terms like “crazy” and “psycho,” they are not only referring to patients at the hospital I work at; they are referring to me. They are referring to members of my family, my friends, my co-workers. They are referring to 18.5 percent of the adult population in the United States. Having a mental illness does not make you less of a person. You are still a human being who deserves just as much respect as any other. You are not defined by your diagnosis. So I encourage you, next time you hear someone speak this way in terms of mental illness, say something. Politely correct them. Make it known this is inappropriate so they are aware and can make changes in the future. Maybe, one person at a time, we can all do our part to change the stigma surrounding mental health.

Photo by Christin Hume on Unsplash 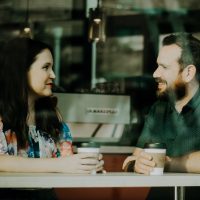