The 90-Day Period That Led to My Endometriosis Diagnosis

With Mother’s Day near, it’s the perfect time to talk about something that every woman deals with: her period.

Every girl remembers her first period and the sensitivities that come with it. I’m fortunate that my mom was right there with me during this special (I mean wild) time in my life. Subsequently, my mom was there for my sister too, and for that, I’m eternally grateful. It’s nice to have support when you’re a newbie in the world of ovulation, tampons and cramps.

As much information as I absorbed about the subject, I never learned that my period could kill me.

Last September, it almost did.

My cycle had been extraordinarily difficult since being diagnosed with fibro, psoriatic rheumatoid arthritis, chronic fatigue syndrome, chronic pain and Sjogren’s syndrome. So much so that my husband and I would carefully prepare for it each month. We knew that the week before and the week of my period would be pure, unadulterated torture. Comfy clothes were planned out for the two weeks, the pantry stocked with junk food, and we braced for sleepless and pain-filled nights. If I had to travel during these two weeks, my husband and I would go into a worried tailspin knowing the additional pain I was about to experience.

In September my period took a turn for the worse. It wouldn’t stop. It didn’t stop. One month. Two months. I bled for 90 days!

And I’m not talking about a slow drip; this was a full-on avalanche keeping me in the washroom every hour.

On day 21, I went to see my OB/GYN. She said I might have endometriosis and sent me home with iron pills. “That’s it!?” I thought. Still bleeding, I went back home.

By this point, my chronic illnesses were starting to spiral out of control. I had to get on a plane in a week and in no way, shape or form was an iron pill going to do the trick.

On day 26 I went back to the OB/GYN without an appointment. The bleeding was too much. I could barely walk, and my entire body was on fire.

In the waiting room, I sobbed uncontrollably because no one would help me. I was desperate for someone to say, “OMG, I see you suffering, how can I help?” Instead, the nurses shunned me. An hour after waiting a nurse begrudgingly called me back to the exam room. She gently held my hand and said, “You are OK.” I said, “I most certainly am not, and I need you to stop the bleeding.”

She sent me to the ER.

To no one’s surprise, the ER had no idea what to do with me. They took my blood, said I was severely dehydrated and my iron levels were low. No kidding!

After eight hours on an IV, they released me, and guess what? I was still bleeding.

At this point, I felt like I was “going insane.” I continued to bleed for another 60 days. I used six months worth of supplies in that 60 days. I struggled to walk, eat and function. I visited the ER two more times.

My rheumatologist was the only one who helped. He brought me in, gave me a steroid pack (because it’s known to help stop the bleeding) and monitored me daily.

I persisted with my OB/GYN. I pushed and pushed for a solution. Through emails and calls (lots of them), I was finally diagnosed with endometriosis and could schedule an endometrial ablation (surgery) to stop the bleeding. At last, it was over.

My husband and I are still horrified by this incident. My life was on the line and help was much too hard to find. If any of my experience rings true for you, here are some thoughts and advice:

In the end, we are our own best advocate, but if you need support, please reach out. Ask your girlfriend/sister/mom to tag along on appointments, or just be an ear. We’re women; we support each other. It’s kind of our thing.

On that note, a special shout-out to all the mothers out there who carry on like tireless warriors. Thank you for all you do, your strength is absolutely awe-inspiring!

Can you relate? I want to hear about it! Connect with me using #ShoutAboutPain and share your stories, opinions and insights. Sign up for my newsletter to learn where I’ll be speaking next, and receive updates on how we’re changing the chronic pain world.

Share
or  Copy Link
Link copied to clipboard.
Be first
34 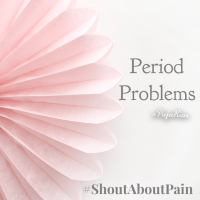