Before I developed schizophrenia, I earnestly applied myself at a prestigious music conservatory for college, having the full hopes of finding gainful employment as a professional musician.

My goal was to be a professional violist, but in what setting? Perhaps in an orchestra, sitting principal chair? Or maybe a violist in a touring string quartet? Or possibly I would win some international competition, which could land me a recording contract, eventually earning a job as a tenured professor at a conservatory. Honestly, I hoped to be a renowned soloist. Nothing made me happier than being at the center of attention, standing in front of an eager audience, whizzing my bow and fingers about to amaze and reach toward the heavens. This was what I loved about performing, the attention. At best, I could act as a conduit through which spiritual wisdom could flow.

Unfortunately, this love of performance did not manifest practically in my studies. Though not yet struggling with schizophrenia, I still had major depression and was overall scattered. Medications stabilized me, but still I struggled with depression in the practice room. I was unable to practice as much as I had wanted, thus depression lowered my productivity. My abilities on the viola did not improve as much as I would have liked, and I also was unfocused in my lessons. I could not prepare myself for auditions at a competitive level, and so my prospects as a professional were not good.

Perhaps another deterrent was that I did not like playing along with other musicians. In orchestras, I always wanted to sit as first chair in the viola section, which I would win by audition. Sitting first made me feel better than the other people, and I was able to focus on the conductor with only a music stand between us, almost as if I were the only violist in the section. And sitting in front also allowed me to not look at people. When I sat further back, I was forced to look at the heads of people I didn’t care about. They were all adversaries to be hated. Although I had won first chair often as a high schooler, this did not happen once I was midway through college.

Worst of all was playing in string quartets. As I rehearsed pieces with the other two violinists and cellist, we were expected to converse with another, offering suggestions to one another and making observations on how we could improve our playing. I hated this process. I found my colleagues annoying in their limitations, so I perceived. I was eternally pissed that the musicians always played with their faces buried in their music, never looking up to connect with one another. But how to mention this without inciting conflict? I resigned it as an impossible task and instead brewed with unexpressed animosity.

Why was I so bitter and filled with hate? Always loitering near the music buildings, participating in orchestra rehearsals, going to lectures for classes in music theory and music history — I felt so alone and isolated. And I enjoyed that. When socializing entered the picture, I got exasperated at people’s stupidity.

Oftentimes, I would venture away from the music school and walk on other parts of campus, or perhaps to the downtown area directly adjacent. During these times, I was not a musician, but instead a mere college student. The main street in the downtown area was lined with ethnic restaurants, many of which I explored on my own. I remember how the sun set in the west, casting shadows that invited contemplation. The air was dry and fresh.

It was this non-musical peace that got me through conservatory. The excitement of living alone and independently, away from my family, self-determining my daily activities. Preparing a breakfast every morning of oatmeal with cinnamon and brown sugar, along with a hard boiled egg. Walking to class with my viola case in hand. Sitting in classrooms, looking at the walls, breathing the dry air. Filling out Sudoku puzzles in the daily university paper during lectures.

I now choose to ignore my negative musical feelings and instead focus on this positivity. By reframing my past, I can no longer be haunted by it. Instead, I can appreciate the experiences I had at that time, having gratitude for the subsequent wisdom that I accumulated from them. I can also be grateful that I survived that difficult time. Certainly, this is something to be celebrated. 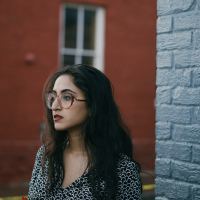