How My Anxious Mind Stays Mindful

Enter the doctor from the psychiatric unit, finally.

“I hear you’re having trouble with your breathing?” she says.

“Yes, I’ve been fixating on it for three days, constantly.”

“I see labored breathing right now, just try to get your breathing back to normal and return to a calm state.”

My thought, not shared: If I could do that, I wouldn’t f*cking be here.

She continues, “Have you tried meditation or mindfulness? There are great apps for that.”

I had been thrust into a dangerous, horrifying, acute anxiety episode three days before, which was triggered by a fixation on an autonomic function. In simple terms, my sick brain made an involuntary and consistent bodily function something I had to manually control — textbook hyperawareness OCD. It was hell. For those three days, and for another week after, my brain was not mine. I made myself believe I had multiple illnesses based on imaginary symptoms. I couldn’t sleep without waking up three times throughout the night, instantly launching into panic attacks. I couldn’t eat, laugh without crying, go to work, read books or focus on TV. My mind drove me to know what it feels like to mourn myself while still alive.

The absolute last thing on planet Earth I wanted to be was “mindful” — at least not in the way it had been marketed to me.

Having a brain that juggles generalized anxiety disorder, obsessive compulsive disorder and eating disorders means I find it very hard to sit still with my thoughts. As my therapist once put it to me, “With your anxiety, you have a brain that’s like a puppy. If you take away the shoe, it’s going to find a sock to chew on.” Which is why a lot of the work I do in recovery and management of my mental illnesses is all about giving the puppy a bone. Something healthy to chew on so she doesn’t tip over the garbage.

Because the mainstream image of mindfulness and meditation seems to be all about ladies sitting on a rock overlooking a sunset with their hands just so, articles telling me if I mediate 10 minutes a morning I’ll become a very successful human being and apps trying to guide me through a “body scan” to become aware of all of my bodily sensations (aka my personal circle of hell) — I never thought these practices could be helpful to me.

I need a task at all times. I need to distract myself from intrusive thoughts by working on a project and focusing intently on it. But what I didn’t realize until very recently is that I’m a pretty mindful person because of all this, and I’ve been using mindfulness to keep my anxiety and OCD in check. Meditation and mindfulness just ask us to be present in the moment, to have one focus. Mine’s sure as hell not going to be a mantra with my eyes closed, but it’s something. I fear the popularization of these healthy techniques has blurred a lot of people’s understanding of what is at the root of these methods. You don’t have to be on a yoga mat, post-green smoothie and repeating a mantra. You don’t have to focus on your breath and body. I’m being mindful right now by writing this article and tuning out my boyfriend who has been trying to talk to me for the past two minutes.

So, here are the ways my anxious self stays mindful, and how you can too:

There’s no right or wrong way to meditate and be mindful. Do exactly what you need to do. You own the ways you keep your mind stable. 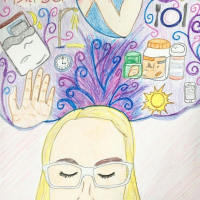