Almost 16 years ago I was 29 years old and expecting my first baby. We were given an unexpected diagnosis of Trisomy 21 right after my son’s birth. Doctors said Down syndrome wasn’t the only thing he had. Fortunately his heart was fine, but at 1.5-day-old, he had his first of three major bowel repair surgeries.

The first surgery wasn’t so bad. He had a little colostomy placed. The second surgery was a complete reconstruction. I won’t go into the details. The surgery itself went great. But the things we had to do to prepare his little body for the last surgery were awful.

I am so thankful that my background in nursing helped me through this stage. But it was still hard on both of us.

Finally, the final bowel surgery came. Our son was now 4 months old and strong and fiesty. Trying to have the IV placed was such a awful struggle. The prep for the surgery was horrible and stressful.

At one point, my mother in law sat with our son so my husband and I could have a break and go grab dinner. As we reached our car in the parking lot we were both in tears. We decided in that moment we wouldn’t have any more children. What if we had to do this to them, too? Our baby still had a spinal cord surgery to look forward to.

So a little after our son turned 1, I took him on a playdate with a group I joined through our early intervention services. We went to the house of a mom who had a 7-year-old daughter with Down syndrome. Her daughter was her oldest of three kids. She knew some of the other moms from early intervention and had invited some of us “new” moms. I will never forget being in awe watching her daughter come off the school bus with her cute backpack. So independent. And I watched as she played with her siblings not really thinking too much into it.

Then the mom and I were alone in the kitchen and she asked me if we were going to have more kids. I told her “I don’t know.” I really didn’t know. I hadn’t even thought about it since that night in the parking lot.

She said they were scared to have another baby, but then chose to and she said it was the best decision they ever made because it brought them normalcy. Their life wasn’t just about Down syndrome anymore. She said their son was the best thing they ever did for their daughter. He brought her life outside therapies and doctors visits. He challenged her. He loved her and was there for her.

A lightbulb went off. She was right. I wanted this, too. She gave me the most life changing advice without telling me I needed to or had to do this. It made so much sense.

So 16 days shy of our sons 2nd birthday, our daughter was born. Three years after our youngest son.

Best decisions we ever made, for us and our oldest.

Thank you. Thank you to the mom who unknowingly changed our lives. 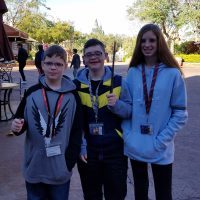