What I Realized About Life With MS When My Car Died

The previous few years had been a whirlwind of activities including the birth of our first child, big career changes, finishing grad school – all sandwiched in with being diagnosed with multiple sclerosis (MS).

I didn’t necessarily consider the car purchase a reward. My previous one was 10 years old and becoming unreliable…it was time.

So, in February of that year, I traded in my old ride for a new one.

For over 20 years I’d been driving on a daily basis. The long treks to and from college, navigating around Northern Virginia traffic and then the more genial experience of tooling around San Antonio.

If we went on road trips, I was always in the driver’s seat – and I enjoyed every moment of it.

I never saw the abrupt lifestyle change that was coming down the road.

The stress and fast-pace of my job was contributing to relapses and subsequently more doctor appointments.  To ease the burden, I started to regularly work from home three days a week and was commuting the other two.

On the weekends, most of the driving was now done by my wife, and in her car.

Within a year, I was no longer working, so the only time I was in my car was driving to a doctor’s appointment or when I ran the seldom errand.

To put that into perspective, the average car mileage in the U.S. is 15,000 miles per year.

Some people describe their car as “like new.” With me, I actually mean it!

So, it was a surprise it wouldn’t start the other day. I called roadside assistance, they came out to jump start my car and I went and had the battery replaced.

About a week went by, I got into my car…and again, it wouldn’t start!

Again, I called roadside assistance, but this time I had it towed to the dealer. As I waited to hear back, many thoughts clouded my head. Did they give me a bad battery? Or was there something else – potentially much worse than a dead battery – causing the problem?

The dealer called to let me know the battery was fine. And all their diagnostics came back OK, too. What he said next caused me to chuckle with embarrassment.

“Your car…it just needs to be driven more.”

And, with that, the mystery was solved.

Some cars endure so much mileage they quite literally get run into the ground. For mine, the situation was reversed; it was dying a slow death from rarely being used.

That was one of my first thoughts after I got off the phone.

My automobile experience, while frustrating and bizarre was also a reflection of the dramatic impact MS has made on my life.

Having my car break down is one thing, but I fear the same happening to my body.

I’ve already had body parts stop working on me. Optic neuritis caused a myriad of vision problems, some of which have never fully left.

Another previous exacerbation makes it difficult to fully grip things with my left hand and anything I touch feels very rough, like it’s covered in sand paper.

On most days, my left foot drags behind me, trying to keep up on even a short stroll down the street.

So, I try to stay as active as I can, but it’s not always easy…

I challenge myself to eat well and stay in shape by stretching and working out at home.

The summer heat is brutal so walking needs to be done before sunrise and after sunset. Outdoor trips must always include plenty of cold water, cool clothes and many breaks in the shade.

Fatigue from MS relegates my default mode to off. But I resist the urge to give in by staying in bed or lying on the couch which creates a perpetual need to find a second, third and even 10th wind.

And it’s not just a physical struggle, it’s also mental, too.

There are no more meetings, presentations to give or conferences to attend. The endless hours spent preparing for these events has been a relief…but it’s also left a void.

I now worry about cognitive impairment, or “brain fog,” from MS. I’ve already experienced lapses of memory, inability to focus and other cognitive issues associated with the “fog.”

As a result, I “work out” my brain regularly by reading, doing jigsaw puzzles and am always looking for other ways to challenge my mind.

Does any of this make a difference? Will I avoid another relapse or slow the progression of my MS?

As I watched my car towed away, I realized I couldn’t let what happened to my dormant ride happen to me.

I need to keep revving my body and mind, resting and refueling with energy, avoiding the potholes of life and MS, as I continue along my unique, odd and beautiful journey of a life less traveled. 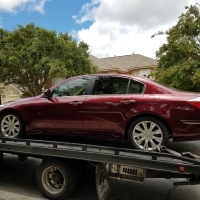