Griffin and His Brother Turner, Who Has Down Syndrome, Make an Appearance on 'Little Big Shots'

This Thursday, brothers Griffin and Turner Scott from Nova Scotia, Canada, will be featured on NBC’s “Little Big Shots,” a variety show that showcases kids who have taken the internet by storm.

Last summer, Griffin and Turner stole hearts in a viral video made by Chris Ulmer for “Special Books by Special Kids.” In the video, the brothers share how much they love each other as well as wrestling. Turner, who has Down syndrome, claims he wins each match.

In their interview Thursday with Steve Harvey on “Little Big Shots,” Turner once again claims his wrestling skills are superior to his brother’s. “He’s very strong,” Griffin admits.

During the episode, Harvey presents the boys with awards for “Best Big Brother of the Year” and “Best Little Brother of the Year.” It’s one of the few instances where both siblings have been celebrated, rather than just the typical sibling.

“Children without Down syndrome typically are more rewarded for their accomplishments, but Turner is part of the equation in this brotherly love,” the boys’ mom, Kelly MacIntosh-Scott, told The Mighty. “Although I do find in society, Turner usually gets most of the attention, it was nice to see Griffin receive this award, especially because he really does do a great job just being a big brother.” 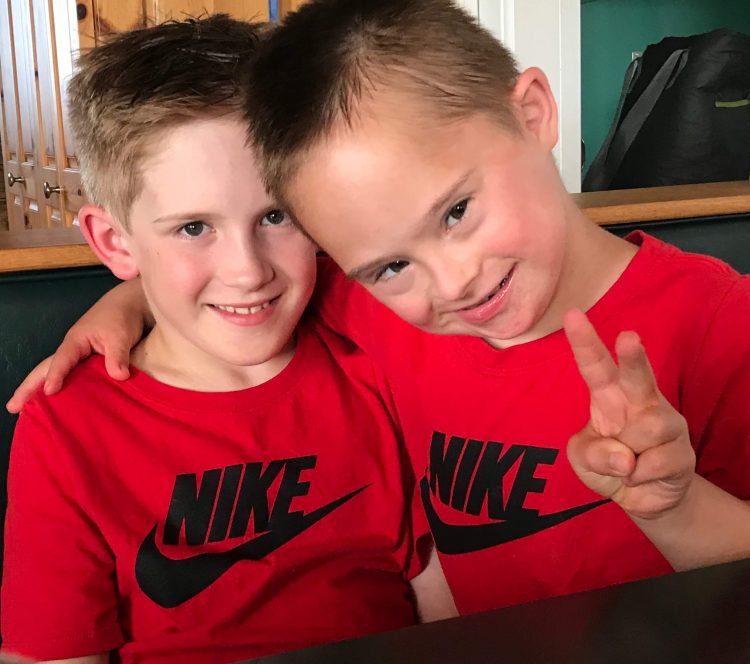 We want the world to accept Turner and children with diverse needs and stop holding the stigma that people of diverse needs are not worthy in society and are not great contributors to the world. It is an especially a proud moment to see your kids on TV being recognized for the special bond that they share.

MacIntosh-Scott said Turner had fun on the show. When people ask for a picture, Turner gives a peace sign, smiles and then is on his way. Griffin, on the other hand, is shy, though he also loved being on the show.

#LittleBigShots is on this Thursday! There’s no better way to celebrate America for another day than with tiny, talented people and Steve Harvey’s mustache.

This isn’t the first time the Scott family has gone viral. In 2016, the boys’ father, Robb Scott, posted a video to his Facebook page describing an incident where he overheard a father tell his son that Down syndrome was an illness of “not knowing anything.” Regretting that he didn’t correct the father, Scott took to Facebook to share what it’s like to parent a child with Down syndrome.

This is important for me to say. Excuse my emotion.Kelly Macintosh-Scott.

MacIntosh-Scott said she can’t imagine a world without people with Down syndrome. “[My son’s] diagnosis at 7 days old wasn’t a heartbreak, it wasn’t a sorrow, I felt like ‘this is great, now let’s get on with our lives,’” she said, adding that raising a child with Down syndrome is just the same as raising any other child. Sometimes things take a little bit longer to learn, she said, but they will get it and once they do, they will master it.

“I would encourage anyone with a prenatal Down syndrome diagnosis to come to terms with it, look forward to it and get ready for a love that you didn’t know you had in you,” she said.

Tune in Thursday, July 5 at 8 p.m. EST to “Little Big Shots” on NBC to watch Griffin and Turner.