In this episode, the friends and their families participate in a family game night. They all want to win of course, and we find out just how competitive Cristina is.

Firefighters show up to help the women make a plan in case of emergency, which is important when you live independently and have to make fast choices in emergency situations.

Cristina, Rachel, Megan and their moms take a self-defense class. For me, as the parent of two girls with disabilities, this was a sobering reality that our children are so much more vulnerable. Later, Laurie, Rachel’s mom, recounts a scary situation Rachel was in and she sums it up perfectly, “My problem is not letting her go, it’s that I am scared. Scared that someone will hurt her.”

While the women take a self-defense class, Sean, who loves to fish, plans a fishing trip with all the men (dads included).

When the women return to Rachel and Megan’s house, they decide to order Chinese food. Megan is appointed as the one to place the order, and we watch as the moms make the right choice to walk away, and let their grown daughters do it on their own. Megan orders successfully, which is an exciting moment for her and her friends. One more step towards independence and tackling fears.

Rachel and Megan invite their parents for dinner. Megan is in charge of cleaning, and Rachel is in charge of cooking. Rachel wants to make ravioli from scratch, and her mom, Laurie, comes early to help her. Although the ravioli does not turn out the way Rachel and her mom expected (there were not enough), Rachel’s commitment to the process is a testament to her determination and ability. They end up ordering pizza so they have enough food. As the women sit with their parents, they talk about what the experience has been like. Rachel and Megan hug and cry, full of emotion as they encourage each other saying they are proud of what they have done living independently. As their parents fought back tears, I was crying along with Rachel and Megan, feeling proud of them, too. It was a beautiful and touching moment. This world still has so much to learn about people with Down syndrome, and this scene to me was a perfect example of their full humanity, showing that their dreams and aspirations are no different than anyone else’s and they are keenly aware it takes more work for them and more effort, but with their parent’s support and their determination, they can do it.

Peter’s thoughts: Megan orders a LOT of take-out Chinese food. The guy on the phone at the Chinese restaurant says,” Can you speak up please, can you say that slowly?” I feel like the guy on the phone was having trouble understanding Megan. But she kept trying and she got the order done.  Then she and her friends get the money out all ready to go. When the delivery man came to the door, Christina checked outside to be safe, and then they opened the door when she said it was okay. Everybody had a fun time.

Rachel is really smart and working hard to be an adult. She wanted to get her own Uber driver to test that out. She wanted to be an independent woman and go to her hair appointment on her own with her Uber app. So she set it up all on her own. The Uber driver picked her up in her driveway. She locked her door and she did go to her haircut appointment. I thought she was doing it by herself, but her mom showed up and was waiting for her. I felt uncomfortable because she was treating her like she is still a kid. Rachel can do it by herself like the adult she is.

Rachel was making dinner of homemade ravioli. She can read the recipe and she can know how to cook. There are two things I noticed: One is that the stove has flames and Rachel turned on the back one instead of the front one. Rachel’s mom was helping her a lot, like a job coach.

All the guys went out on a fishing boat. It looked like a lot of fun. They kissed a fish and that was silly and funny. They were talking about a lot of things on the boat, like Angel and the wedding. That is what guys do when they are having fun.  John got to drive the boat and that was better for him. It’s not like the street, when you are driving on the water it is easier because you are gliding.

Steven is studying to get his driving permit and his mom and dad are helping him. He attends a comprehensive driving evaluation, where he will be assessed to see if driving is a realistic option for him. The driving coach checks his vision and reflexes then they do a behind the wheel assessment. Steven is very cautious, but he does a good job behind the wheel. The coach recommends Steven have his peripheral vision checked. After this experience, Steven decides he needs more time as he is considering the consequences and responsibility of driving and does not know if he is ready yet.

Like Steven, John wants to drive. He and Steven are studying for the written test and Elena is helping them study. John’s sisters are proud of John’s desire to drive, but they aren’t sure it is a realistic option for him. John is bothered and feels his sisters do not believe in him. John also has a comprehensive driving evaluation. The coach believes John may have a visual field cut. After the portion driving behind the wheel (John seems to like speed) he tells John he has some problems to overcome. John needs to see an eye doctor but also an occupational therapist to work on some skills. The instructor advises John to take it slow.

Peter’s thoughts: It was a cool moment when John and Steven were learning more about driving. There was an older gentleman who was a special ed driving instructor.  He was helping them learn how to drive. They were talking about the gas and brake pedals. They both had a turn to really drive a car. John went really fast and Steven went really slow. Then after he had his turn to drive, Steven said he wasn’t ready to drive yet and said good luck to John. I think John will drive one day but it is very hard. If that was me, I would be scared to drive on a road. I know about traffic lights but what would happen if there are cars next to me. I wouldn’t know what they were doing or if they were going to cross the road. So, I don’t want to drive 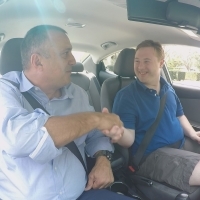