How I'm Working Through Autistic Burnout

Autistic Regression, or as some people call it, Autism Burnout, is quite common, at least according to my therapist. It’s especially likely to occur during transition periods: puberty (9-15), young adult (18-25), and midlife, but it can happen at any time. There are many causes of Autism Burnout, including trying to mask (blend in and act “normal”) for too long, major life changes and/or periods of increased stress. But what is it exactly?

I liken it to a computer. You know when you have too many tabs open, maybe have music or a video playing as well and suddenly your computer freezes or closes everything? The more you have installed (games, apps, etc.) or running at once, the slower it is. Uninstalling some things makes it faster. My brain is similar. In order to keep basic functions, it shuts down (or uninstalls) any additional functions.

I’ve lost, or am losing: social skills, speech abilities and short term memory. I’m struggling to tolerate sensory information, I’m more prone to meltdowns and self-injurious behaviors, and my executive functioning skills (organization, prioritizing, multitasking, emotional regulation, decision making, impulse control, etc.) are basically non-existent. Throw in a few anxiety disorders, and I’m in a constant state of nervousness, more so than normal. I’m nearly constantly stimming, my tics are more prevalent, and I can’t remember any of my social scripts (other than “Hello, how are you? I’m good how are you?”). I’m relaying on movie quotes and hoping I say and do the correct thing.

I would say a couple things caused this.

2) I’ve gone a solid three years of being/appearing 85 percent “normal,” but this has taken a nosedive to maybe 10 percent over the past months.

3) There was one big incident I think was the spark that started the fire, a workplace conflict.

Then with increased anxiety, the ball kept rolling. A bunch of small things kept adding to the pile.

Slowly this caused my anxiety to skyrocket, as due to the burnout, I’ve lost coping skills. This snowballed into its own added issues.

Everything is combining together, creating more difficulties.

There isn’t any way to stop it once it starts; I figure without intervention it would lead to a road of self-destruction. But with intervention, I’ll be able to function again. I’ve worked with an online counselor, and my OCD is back in check. Working with my doctor, my medication is regulated, no more complications from it. And I have something to take when going into a bad meltdown which should help me avoid self-injurious behaviors and calm my head.

Although unintentional, my current change in job duties involves me jumping from task to task and into different areas. This has helped me with my transition skills, including prioritizing, not knowing things, adapting, and the anxiety talking to people out of my immediate department. Having to ask people questions, and talk to them; when otherwise our interactions are hello, how are you.

I’m hoping, in theory, these will translate over to my regular duties — at least enough to take the edge off the anxiety so I can relearn them.

My therapist likened it to Bruce Banner and the Hulk in “Avengers: Infinity War” (spoilers involving the Hulk if you haven’t seen it):

When Bruce Banner fights, he calls out the Hulk (either intentionally or unintentionally), but in “Infinity War,” the Hulk refuses to come out, leaving Banner stuck. When faced with a challenge, Hulk is Banner’s coping mechanism. Hulk comes out, smashes things and saves the day. Problem averted. But without the Hulk, Banner has to figure out a new coping mechanism.

Throughout the film he’s frustrated and angry, letting his team down, or as Iron Man says, “embarrassing him in front of the wizard [Dr. Strange].”

At the end of the film, Banner modifies the Hulkbuster (a machine Iron Man built to fight the Hulk if he went off script and if Black Widow wasn’t around), so he can use it. He uses the Hulkbuster to fight in the final battle. It’s just as effective as the Hulk, but different.

I’m working on creating my own Hulkbuster. It’s a slow process, and won’t happen overnight. I’m impatient; I will jump into something I know I’m not ready for and then be confused as to why it didn’t work. I think having a name, an explanation of what’s happening is a big thing. I need to know the why so I can fix it — not to use it as an excuse. I refuse to use any of my issues as an excuse, other than refusing to go outside in the humidity because of my asthma — which is more of a preventative measure. I need to know so I can make a plan. So I can figure it out.

I’m like Batman; I need to have 100 plans and scenarios laid out in my head (yes, I just mixed superhero metaphors). I need all the “what ifs’ accounted for. I don’t do “try this and if it doesn’t work we’ll figure something else out.” I do “this is the main plan. If this happens, then this. If this, then that.” I need a constant plan and routine in this otherwise unpredictable world.

Now that I have a why, I can work on the how. 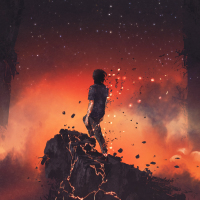