When my youngest daughter was born, her diagnosis of Down syndrome was officially confirmed after a level-2 ultrasound had shown several markers. We then knew our baby most likely had an extra chromosome. We had met with a genetics counselor before her birth. After her birth, we were encouraged to visit with one again. This time we chose one closer to us.

I wasn’t sure what to expect a second time around. Would the focus be on future children? Would he suggest testing to see if the extra chromosome came from me or my husband? Would he go through her karyotype as all we had received was a piece of paper saying in five cells tested, they found the presence of an extra 21st chromosome in two of them? What did that mean?

Instead, it turned out the meeting was a formality where, from my perspective, the geneticist wanted to make sure we believed our life would be miserable and our daughter’s life would not amount to much. He said she would have a severe intellectual disability and depend on us completely for the rest of her life as she would be incapable of any independence and her potential would be limited.

As we walked out of his office, I turned to him and said, “You can’t do this. You are so wrong. Your words offer no hope at a time when parents need hope. You really need to read the book, ‘Gifts: Mother’s reflect on How Children With Down Syndrome Enrich Their Lives.’ And also, I will send you my daughter’s graduation invitation, maybe even her wedding invitation, or an invite for the day she opens her own business.” He laughed.

He was fired a few months later, so my guess is we were not the only parents who called later to complain and express how unprofessional and biased his information was.

I have no idea where he is. Honestly, I do not remember his name. But I do remember what he said, and I wish he could see my rascal now. Eleven years old and capable of so much. Sure, math is not her forte, and reading is still not quite there yet, but she is pretty independent and resourceful. And based on where she is now, we do expect her to be able to live independently. She has also made it pretty clear she plans to get married and have her own dog — that she will name “Cookie,” “Mason,” or if it’s white, “Snow.”

I know I am not the only one, so we reached out to our Mighty parents who have kids with Down syndrome and asked, “What is one thing doctors said your child ‘will never’ do yet your child proved them wrong?”

These were their responses:

1. “The doctor who gave us the diagnosis told me my son wouldn’t sit by himself until he was 11+ months, wouldn’t crawl till 14+ months and wouldn’t walk till after 2. He’s 16 months now. He sat by himself at 7 months, he crawled at 10, he stood by 12 and is walking at 16 [months]. He proved her wrong in everything he did. And will continue to do so. I’m so proud of absolutely every single thing he does.” — Shayla B.

2. “I was told I wouldn’t be able to breastfeed my daughter. I begged for a chance, but they wouldn’t even let me try. Finally, around 15 hours after her birth, a NICU nurse let me hold her. I sensed she was hungry so I asked the nurse if she would just let me see if [my daughter] would latch on. She agreed, and she latched immediately! The next morning a lactation nurse told me I needed a plan B because she was worried [my baby] wasn’t going to continue to successfully nurse. She was wrong. I nursed her until she was 2 1/2 years old! I even nursed her 12 hours after heart surgery! My girl’s a champ (and a pretty good eater!)” — Jennifer H.

3. “It wasn’t a medical doctor, but the school psychologist said, ‘Don’t stress, he won’t amount to much anyway.’ This was when my son was 3 and just starting school. Needless to say, I demanded another psychologist to take my son’s case and this man was never to interact with my son again. That man couldn’t have been more wrong.” — Debi R.

4. “A doctor said, ‘Don’t be surprised if she never learns how to walk, talk, tie her shoes, ride a bike, etc.’ From that moment on I was determined to prove that doctor wrong. My daughter can walk, talk, and much more. She graduated from high school and has had her first job! Never let someone else put limitations on your child!” — Katie S.

5. “Our 2 nearly 3-year-old daughter can do just as much as the other children her age. She can walk, feed herself, she can go up and down the stairs (supervised). She’ll sit and watch TV or play with her sisters. She loves to dance away to her mummy’s singing. Too much emphasis is placed upon what children with Down syndrome can or can’t do or when they will meet milestones by doctors. Our daughter was diagnosed at the age of 9 months and the doctors missed that and they are meant to be professionals. Push your little ones (within reason) and watch them grow.” — Aaron D.

6. “Ignorant NICU nurse said he would not read — he was 4 days old and right out of life-saving surgery. Don’t ever tell a new mom — let alone a teacher — what her newborn baby won’t do. He’s reading and proving people wrong all the time.” — Heather B.H.

8. “[Doctors said he would not] live past the age of 10, due to heart issues. He just turned 36! He does have congestive heart failure. But to look at him you would never know it. He continues to amaze us with his sense of humor and love of life!” — Laurie H.

9. “The doctor told us [my son] wouldn’t live but a few hours after birth because he didn’t have his entire heart. He said in the slight chance he would make it, he would be a vegetable who would never walk, talk, or even know who I was. [My son] was born with an ASD and VSD, which are both now completely closed with no surgeries. He walks, babbles, and definitely knows his mommy. Never let a doctor put limitations on your child. There’s no telling how many women listened to that doctor and had abortions. No doctor has the final say on our babies.” — Aimee C.

10. “When our son was born 33 years ago a ‘specialist’ told us that he would never read or write and that the best we could hope for was perhaps he could be in some kind of circus show. Our son reads, writes, sings at public functions, graduated from high school, and now lives in a group home and is active in his community and with his family! He is loved by so many.” — Judy S.

11. “We were told to ‘give him up’ for adoption because he would be capable a little more than giving and receiving love. He has a job, has performed on stage several times, even singing solos, participates in five special Olympic events. A lot more than we ever could have expected or hope for.” — Carolyn K.

12. “I was told, ‘She has Down syndrome. There are excellent facilities for people like this. Place her there, go home, have another baby and enjoy life.’ Fast forward 35 years, she is independent, loving, sassy and sticks up for herself. She cooks, she loves her friends. She is my beautiful girl. Doctor is still practicing. How I would love for him to meet my perfect girl.” — Debbie M.

13. “My daughter was born in a small country hospital in Gros Umstadt, Germany, 29 years ago. The doctor told me that she was ‘a mongoloid’ and should be institutionalized. Within a month that hospital was declared off-limits to American military personnel and families.” — Nancy H.

15. “We were blessed to be surrounded by positivity. Our doctors never talked about limitations, only possible timelines, but acknowledged that he would do all of it at his own time whether that meant sooner or later. However, I have a cousin with Down syndrome and the doctors told my aunt that if he was out of diapers by the time he walked the stage to graduate high school, they’d be doing good. He has been blowing doctors away since he was born! He and my son are awesome!” — Sara S.

16. “The doctors at the hospital said our daughter would not be able to play, run for a long period of time and that she would get tired very easy. Guess what? She proved them wrong, she’s totally the opposite, she’s the love, joy of our life. We’re so proud of our daughter, she’s very intelligent and can outsmart anybody!” — Eduardo S.

17. “There is a long list of things. But her not living past a year was the biggest and they kept trying to convince me to abort. I refused every time. Here we are, three days from 14 — guess she showed them.” — Amanda J.

18. “I was lucky. Our pediatrician was wonderful. After I got past the OBGYN telling my husband there were places we could put [our son] while I was still in the recovery room, we were just fine!” — Carolyn W.

19. “There was not one specific thing, more like a generalized warning of doom. These kids require 24/7 care (don’t all kids?), you son will never be able to live on his own (he is only 22 months so time will tell). Pre-birth we were given warnings and options that scared me beyond belief. Happy to say he is nothing like what they warned us about, he is 100 percent capable, he is beautiful, he is determined and he will destroy the stereotypes.” — Christy W.

20. “A pediatric OT that told us not to even worry or think about our son jumping, because it would probably never happen. It seems like a simple milestone, but we were always annoyed with that statement. He’s 6 now and I can’t get that boy to stop jumping off things, over things, or in things.” — Jessica N.

21. “The doctor told my parents my brother wouldn’t live to be 10 years old! He made it to 56 with no outstanding health issues.” — Anna K.

22. “My son, who was 5 years old at the time, cut his hair. He was entering kindergarten and was being evaluated by the school psychologist who told me that ‘typical kids in kindergarten don’t cut their hair.’ His speech therapist laughed and said that ‘if you walk in any kindergarten class, you will see at least one kid who cut their hair.’ Kids with Down syndrome are just like other kids.” — Mary W.

23. “We were told our son would never do the ‘quadrapod’ crawl due to his inherent lack of core muscle tone and poor coordination. He proved that completely wrong.” — Chris E.

25. “A geneticist told us [our son] would never have a job. At 27 he is a passionate and successful artist @justcharliefrench.” — Karen F.

26. “I was told that my child with Down syndrome should never enter the international school as it was impossible that she will communicate in both, Thai and English, and it would slow down her communication and speech. Now she is 19 [and speaks two languages].” — Hari M.

27. “My son was born 40 years ago. Our pediatrician was extremely positive and talked about expectations. He did say that he would not be president but could do much. We were lucky with our doctor and our first step into the world of Down syndrome.” — Judy D.

28. “I was blessed with a pediatrician who did not put any limitations on my son. He had nothing but excitement when he gave us the diagnosis and told us he couldn’t wait to take this journey with us. In fact, I believe his words were “he’ll learn to do all the things your other boys will do… On his own timeline.” — Jeannie E. 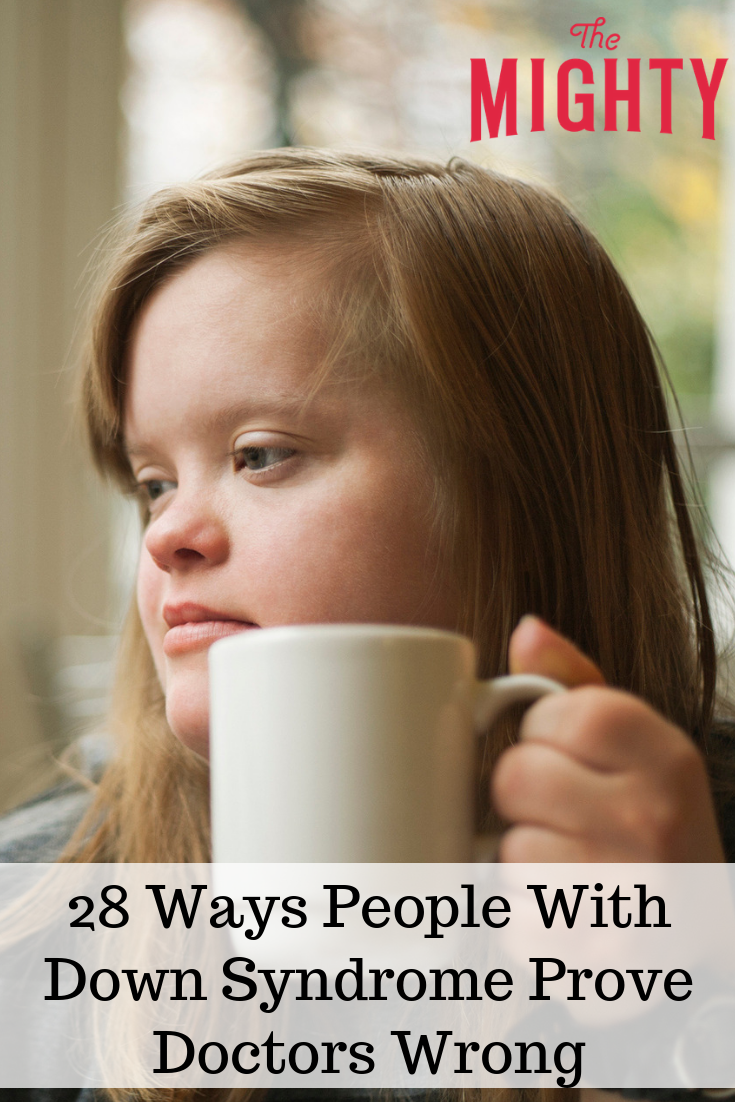