On March 24, Julian came into the world, sometime between Elton John’s “Rocketman” and “Let It Be” (my husband chose the playlist and I’m a bit of a Beatles fan). Three days earlier we were rushed to the University of Michigan because there were some significant issues with our son that had not yet been diagnosed. The team in The Nest was ready for him, he came into the world silently and was resuscitated immediately. He also received a set of chest tubes and was intubated. He was really sick — and we didn’t know why.

We were miles away from home so we were able to get into the Ronald McDonald house while we waited for a diagnosis. Two days later, as I was getting discharged from the hospital, my doctor got on one knee and told my husband and I that our son had Trisomy 21. I’ll be honest and tell you I’ve never cried so hard in my whole life. We have a 9-year-old son who is very active and this diagnosis came as a huge shock to us. We called our families and instead of shock and negativity, we were greeted with a loving response. In fact, my dad started sending me videos of Frank Stevens speaking to Congress. For three days we sat in disbelief and wondered how we were going to make this work. On day four, we started to come to terms and I think my husband and I both knew we were destined to be Special Olympics coaches. While in the hospital, I fell across Miracle League, a baseball diamond for kids with disabilities, and having a job in Parks and Recreation I went to work, knowing my son would be the first one on that field.

Days turned into weeks and our boy wasn’t healing. What we thought was a short-term NICU stay turned out to be months. Julian The Fighter beat ECMO and rallied through bouts of fluid retention that doctors have never seen. We talked to doctors in Italy and at Children’s Hospital of Philadelphia. We caught our little man on a good day and had the MRI we had waited desperately for. Our news was not good. They called it congenital lymphatic dysplasia. His lymph system was a mess, or maybe it didn’t exist. We called him our unicorn. They tried everything but we knew at that point that our boy was going to have to make the decision. 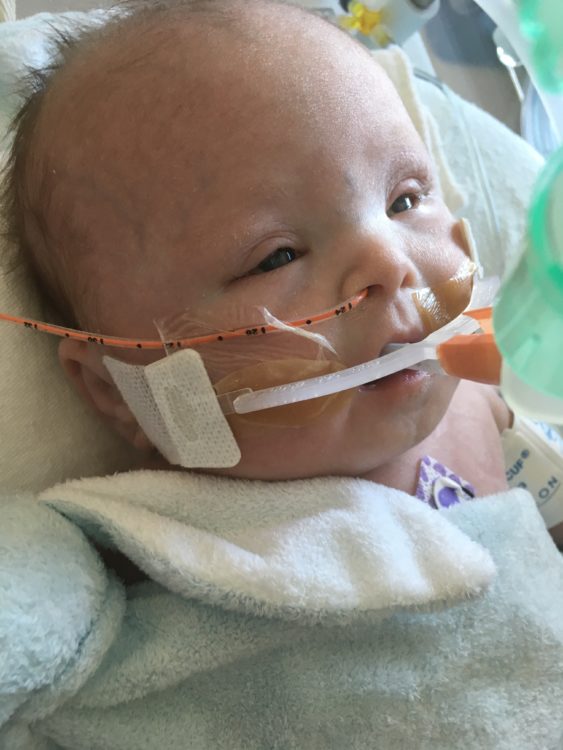 Our Jude left us on June 5. While he was only here for a short time, he was the biggest, baddest fighter we know. He was our Littlest Victor. Our community came out to support us and we have never felt more love. Fast forward four months and we are healing. Plans are underway for Julian’s Miracle Field and our community continues to support us. Our circle has been expanded and I’ve met some amazing people in the disability community. If Julian were here he would have the most inclusive family and friends than any kid I know, disability or not.

Julian taught us a lot. He taught us what true love and true sadness was. He taught us that every single day was a gift. And that’s our message to other parents who have lost their babies, Down syndrome or not. The month of October has a whole new meaning for us — but we’re going to celebrate it just as we celebrate our Sweet Julian.

Our son Julian was born in late March and we discovered he had Downs Syndrome after he was born. He passed away due to complications but his short 11 weeks has changed our community forever.