Canadian Natalie Roy is a former pulmonary hypertension patient who received a double-lung transplant in September 2017. She discusses having an identity crisis post PH.

My name is Natalie Roy. I live in Vancouver, British Columbia, Canada. I was diagnosed with, what was called at the time, primary pulmonary hypertension in 2005 when I was 20. Currently, I am one year past new lungs. I just celebrated my one-year lungiversary.

I just started fainting. I started noticing that I was having a hard time walking up hills. At the time, I just wanted to avoid it. I think I was scared, but I was like, “Oh, I’m just dehydrated, or I need a nap, or maybe I haven’t eaten enough today.” I just was in denial and altered my life patterns to better fit not walking up hills or walking upstairs or whatever.

I fainted walking up a set of stairs. And somebody had called an ambulance. I guess my lips had gone blue, and they couldn’t wake me up for over 10 minutes. So I got diagnosed in the emergency room with six months to live, at the time without treatment.

I got on some oral treatment, and made a life change, and moved to Alberta and went to school for chef’s school. I did really well for the first five years on just straight oral treatment. And then I went to Australia for a year. And when I came back, I started fainting again. So they put me on a secondary oral. That lasted about two years, and then I started having symptoms and went on IV medication for five years. And got listed for a double-lung transplant November 1st, 2015. And received my lungs September 7th, 2017.

I had always told myself when my team tells me it’s time, it doesn’t matter if I feel ready or not, then I’ll just do it. If they say it’s time to go, then that’s it. So when Dr. Levy started talking about listing me, I was still working. I was still riding my bike, still totally able bodied. And both me and my partner at the time, we were like, “It doesn’t feel like I’m sick enough.” But I went on the list anyways.

And we had a bit of trouble finding a blood match, which I thought I had common blood type, A positive. But it’s actually not that common. I had an antibody that was also a hard match. So it took us a bit longer. And in that 19 months I had one dry run, which was where they prep you for surgery and then the organs aren’t viable, so they send you home. So that was devastating.

But in that 19 months I started getting very sick. And I went on oxygen, and my lungs kept getting infected. And I had septic infection that almost killed me. So my doctor, being able to foresee all of those complications, or that actually you’re sick enough that if you start to go down, you’ll go down very quickly.

Because I had been sick for so long and my heart was in and out of heart failure, and my insides were quite sick. But I’d never looked sick. So I would say, “If transplant is something that is right for you, then do it even if you don’t feel ready for it.” And if you don’t feel sick enough, because even with the survivor’s guilt stuff, where I was like, “But there’s so many people that are sicker,” or, “Am I even sick enough for this? Is this the right time?” The problem with PH is that you do go down fast. And you don’t recover.

For me, my journey was a little bit confusing because for the first five years I was very much in denial, or I never wanted to make a big deal about anything, or make anybody else uncomfortable with me being sick. So I would say it in a way where I just had this little lung disease, or I had this little thing, and I never really felt like I was ever sick enough.

The thing is, is somebody will always be sicker than you. You know. And it took just within the last month or two that I got moved into a place where I felt that actually I was sick enough, and I did deserve these lungs. And that it was okay that I got them. And yeah, people are sicker than you, but that’s life, you know. And you’re always going to be faced with that.

I think the survivor’s guilt part was that I had friends that are at end stage, and they are too sick to get transplant. And they’d be diagnosed longer than me. And they’ve had a harder journey than me. And I’m over here, riding my bike, and walking my dog and living my life. And really feeling quite removed from the sick girl that I was last year. Because life is so different now. And I guess I feel guilty in that, at times.

When I got home from the hospital, and my partner said something about when I had PH. And it hit both of us, like, “Oh my gosh.” I’d been sick for 13 years, and that was my identity, and I was very active in the community, and helped co-running a support group, and be in contact with anybody getting diagnosed. I’d go to the hospital and talk to them, and give them my contact. Being active and of service.

I think that when I got out of the hospital, and I didn’t have PH and a little bit of my online community, it felt more quiet. I had a bit of an identity crisis, where I’m like, “Who am I?” I’d been sick for so long, and then I was on the transplant list for what felt like for so long, that that became who I was. And then now I’m this person post-both of those things. And I think as long as I continue to be of service, and to be a contact, and to love and nurture my community, as well as share my blessings that I’m experiencing. Because that is hope. Even though that feels uncomfortable sometimes, I think that that’s who I am in the community now. So I’m Natalie, who’s had a transplant, and used to have PH.

Transplants been like such an obvious blessing. But it’s also been like a really big challenge from being listed and getting really sick really quick near the end there. And then getting, just the whole thing. I would say, yeah, make sure you reach out online. If you’re feeling isolated and overwhelmed because there was dark times. There was times when I couldn’t get out of bed because I was so crippled with anxiety around dying. And the actual fear around the actual surgery, which is really strange. And I definitely learned some deeper things about myself, and was able to process that through Generation Young Hope, through the other PHers online.

My name is Natalie Roy, and I’m aware that I’m rare.

Share
or  Copy Link
Link copied to clipboard.
Be first
1 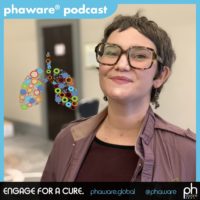