How I'm Breaking Through Limitations as a Blind Athlete

Have you ever had a great vision for your life or some compelling goal you daydream about often, but you aren’t living it now and are not on the path to achieving it? How are you stopping yourself? What limitations are you putting on you? This article is an open invitation to anyone who has a dream but hasn’t brought it into reality yet to break through your limitations and step into your fullest potential.

You may be wondering who I am to offer advice on achieving your goals. After all, I don’t know you and your unique circumstances. The short answer, and the good news, is that I’m not writing this to offer advice; even as a coach I do not offer that to my clients. Instead, I want to present a framework I hope can help change what’s possible for you. The ideas presented here have shaped my experience as a blind woman and specifically a blind athlete.

I am writing this from the perspective of an athlete, because in my own journey that is the one aspect of myself that is the most impossible — and yet I’ve achieved it. Growing up as a visually impaired child, I never joined the local sports team or considered myself athletic. Not only did I believe I would have been detrimental to any team’s winning record, I also lived with the constant threat of losing the vision I did have. One ball to the face could result in total blindness.

It wasn’t until I was an adult and legally blind with 5 percent vision that I decided to step into the world of athletics for the first time. Despite being out of shape and told my whole life that sports were not in the cards for me, I committed to running a Spartan race. This is a four vertical mile stadium course with 25 obstacles. It seemed like an impossible proposition but I was going to do it anyway! In the end not only did I run the race but I had developed love of CrossFit and Olympic lifting and an obsession with pushing myself further than I could have ever imagined at the beginning of my journey.

I hope some part of this article will inspire anyone with a dream or goal to take the next step in achieving it.

One of the fundamental beliefs that has been echoed through many spiritual traditions, found in quantum mechanics, and has shaped my life is “reality is what we make it. “Reality” does not exist as a universal experience. How I experience life and the world is dramatically different from you. At some point in human development, we came to some agreements about how to communicate with each other to bridge the gap between our unique realities, but it doesn’t make one experience of reality any more real than another. When people talk about “reality,” we are referring to an agreed-upon fiction. Sure, there are rules in the physical world that we have to play by, for example my blindness. However the meaning I make of it and the “reality” I craft around it will be different than someone else’s.

Regardless of the physical rules of existence, I believe you can bend reality in ways that change it. It’s not uncommon for people to drift through life thinking our shared fiction is real and they are the victims of it. These are the people who are at the mercy of life’s ups and downs and rarely achieve their goals. It would have been easy, for example, for me to sit at home and be a “victim” of my blindness — but that “reality” was not good enough for me. I wanted more,and I would (and continue to) bend the “reality” of my blindness until it matched my goals. I’m inviting you to make “reality” bend to you. Be a cause for your experience of life, not a passive recipient of whatever may come. Those who achieve greatness, the Steve Jobs of the world, do not agree to a shared fiction; they make reality bend to fit their vision. I believe you can do it in your life too.

Next, do not accept “can’t” being wrongly imposed upon you. I believe the word “can’t” is one of the most limiting linguistic constructions we have. “Can’t” keeps our dreams in the realm of impossibility and stops us from taking the steps that would bring those dreams into existence.

We get “can’t” from two sources: others and ourselves. When I first decided to run the Spartan, I excitedly told a colleague only to have him say, “Oh yea, right.” He obviously thought I was joking. I assumed he thought that because I did not have the size or shape of an athlete at the time, so I explained that I had started training for it. He retorted with, “You can’t do that, you’re blind!” Those who know me well know I eat “cannots” for breakfast. I am not a person who takes others’ realities as my own.

When someone else places a “can’t” on you, they are not speaking about your ability or your potential. They are showing you the limitations in their “reality.” They are saying if they were in your position, they don’t believe themselves capable of doing it. Their “can’t” is about them, not you. Use their “can’t” as fuel to move you forward.

The second “can’t” may initially be more difficult to shake off because it’s our own inner voice, and it’s usually followed with a justification for the limitation in the form of a “because,” which further solidifies it. That justification then has any number of meanings which may further stop an individual from moving forward.

In the world of CrossFit, there are many exercises that can be difficult for blind athletes. They require balance, which is linked to a healthy visual system, depth perception, or hand-eye coordination. It would be easy and perhaps even understandable to think “I can’t do this because I can’t see” and just not do it. That is not a “reality” in which I care to participate. I prefer “I can” even if it means modifying or scaling the movements until the body finds a way to do them without reliable visual information.

When thinking about your dream, what “I can’ts” come up immediately in your mind? Those are valuable, because they show you the exact parts of your “reality” that are ready to bend. Those “I can’ts” are showing you the borders of your current inner map. It’s time to expand beyond those borders.

Everything that follows the “because” is just showing where you may need a workaround, which I’ll talk about later. As you think about one of those “can’ts,” what small step can you do right now that will lead you in the direction of the dream? After you do that, take the next smallest step and keep doing that until the “can’t” turns into an “I am.”

The second part of the “I can’t” statement is incredibly valuable. The “because” shows you exactly where to think and act differently. No matter the limitation there is always a workaround. The Spartan race can be tough for blind athletes due to the changes in terrain, the fact that we are often carrying heavy objects, or need both hands to climb. This means using the cane is not always a possibility. This is a great opportunity to get creative. 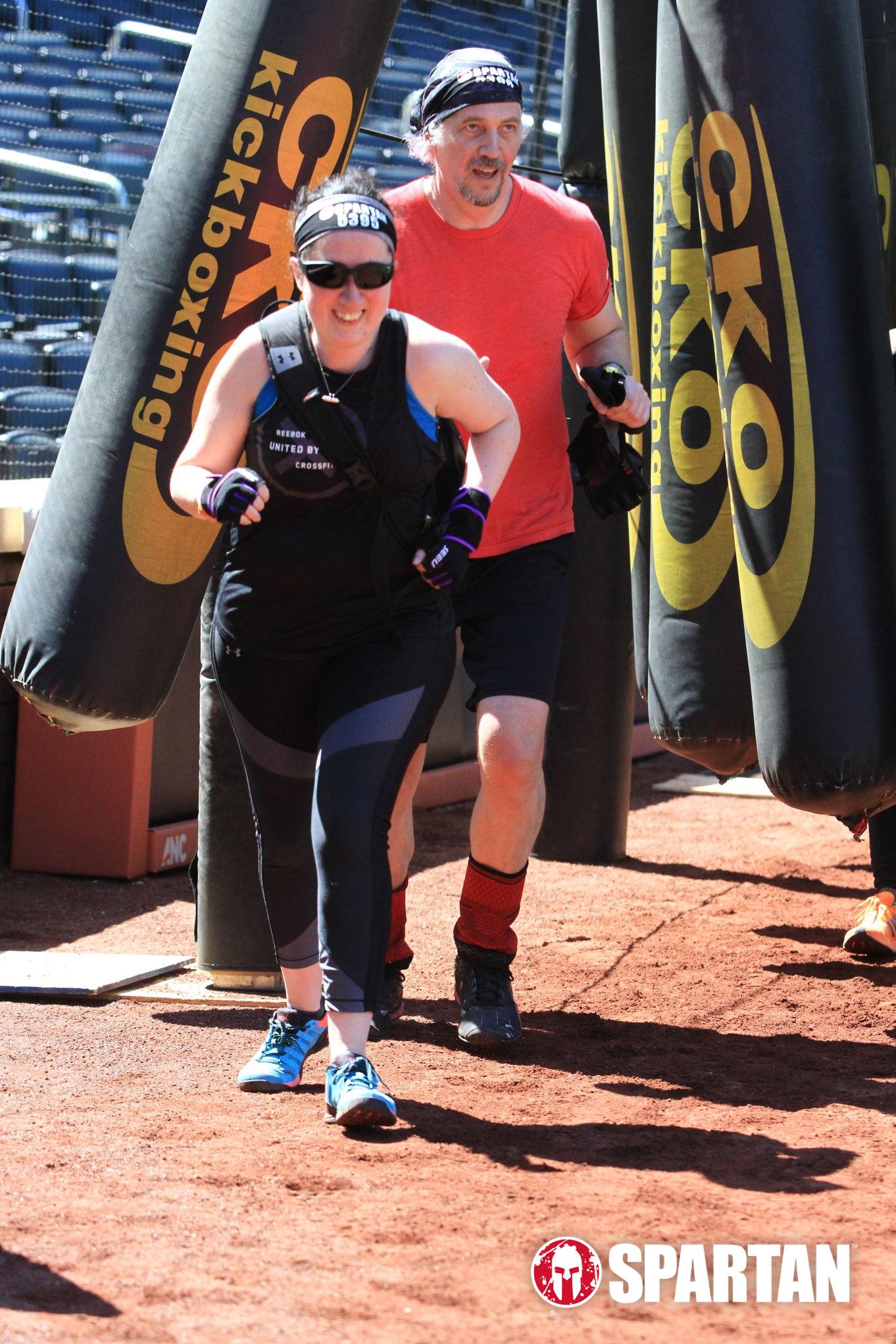 The basic solution is to do the race with a sighted guide, which in my “reality” is a necessity. In the picture with this article, my guide and friend is behind me for the last leg of the course. This was a great start, but there were times I still needed the cane, which meant I couldn’t complete the obstacle, or in the case of carrying a 35-pound sandbag down stadium steps, I did so incredibly slowly with a constant fear of falling as I had to guess where the steps were. The workarounds for my next race in 10 days time involve getting creative with luggage straps!

I believe we are often truly limited by the games we play in our own minds. There is almost always a workaround in the outside world. The secret is to think creatively. As you think about that dream, what are some of the obstacles standing in your way? If you were to observe that obstacle from outside of it, like watching yourself in a movie experiencing the obstacle, how many creative ways can you come up with to solve that problem for “the you” in that movie? Pick one of those options and try it. If it doesn’t work, be flexible and do something different.

Finally, take action and be relentless! We all have to start somewhere, and it doesn’t matter if your dream feels like it’s a million miles away or within reach. Either way, you will not get there until you move. When I first started training for the Spartan, I was 30 pounds overweight and had no regular workout regime. The interesting thing was, the thought of losing that weight and being in racing shape was only overwhelming if I thought, “I can’t do this.” Once I took action, I knew the result was inevitable within a workable time frame.

The more I trained, the quicker I realized that the dream of running the race was too small for me. I wanted more. Why stop with one achievement when so much more is possible? Keep relentlessly moving forward. If your dream is important to you, I believe you can push through any barrier. There might be times when there are obstacles — for a blind athlete, they tend to be daily — but keep pushing forward. Obstacles are there to make you resilient.

Once you realize your dream, don’t stop. Keep moving forward. Expand the dream and keep bending your reality to support your continued growth, well-being, and happiness. 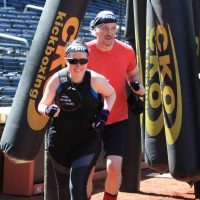