Thank You, President Bush, From an American With a Disability

Have you seen this picture? Take a look if you haven’t. It’s an important one.

As International Day of Persons With Disabilities came and went Monday, the 41st President of the United States has not been far from my mind. As the nation says goodbye to George H.W. Bush, there’s been a lot of conversation about what he did right and what he didn’t. Here’s what I know. All other politics aside, he did what many before him wouldn’t; he gave what was and in many ways still is the most marginalized group of people in this country rights by signing the Americans With Disabilities Act (ADA).

This law came after a decades-long fight by many whose names I will never know, but will forever be grateful for. President Bush used his position to give me and others the same access to the world as everyone else. Because he stepped up, equitable access became an expectation rather than a favor or a nice gesture. For me, this means I was able to go to school and become a social worker. It means I can ride the bus, go to the movies, take my dog for a walk, have dinner with friends, cheer on the Seattle Mariners even when they make me cry and so much more.

Sound pretty simple? It is, but these were not rights I would’ve had prior to 1990, and they are rights I do not take for granted. This is a law I have and will continue to depend on every day of my life, and I know my story is not unique. For that I say, #ThankYou41. Thank you for stepping up.

I don’t know, but I would like to believe equality was on the President’s mind the day he signed this law. As grateful as I am for the past, I look to the future with hope, knowing we have a long way to go to reach equity and equality.

I hope that one day soon, the history I spoke about above is taught in schools with the same level of importance and frequency as the history of racial equality.

I hope the next generation of kids with disabilities will grow up seeing themselves in the world — in the media and in more than one TV show, in their mentors and teachers and doctors, even in their toys, and that they will know they can do and be whatever they want.

I hope that when diagnoses are given, the first words out of a physician’s mouth are not “I’m sorry,” but instead “Don’t worry. This world is set up for you or your child. You’re going to do great.”

I hope necessary medical equipment and care won’t be a fight forever.

I hope that a kid with autism can go to prom with his best friend and not be broadcast on national TV because his friend is such a good person; that they instead get to enjoy their night like any of their other classmates.

I hope the word inclusion is forgotten because the concept is a given.

I hope employment rates of people with disabilities go up and poverty rates go down.

Most importantly, I hope we never have to fight to keep the ADA and subsequent supports. It is as needed now as it was when it was signed.

I’d like to believe these hopes are attainable because many of them are already starting to happen. But in order for them to be fully reality, disability has to be talked about. It has to be fully and completely a part of the diversity conversation and recognized as such by people who are not directly affected by it.

That might take a while. And that’s OK. Until then, I will celebrate days like International Day of Persons With Disabilities, say thank you to President Bush and others like him who have stepped up to make this country even just a little more equitable, and do my part to make sure their work continues. Will you? 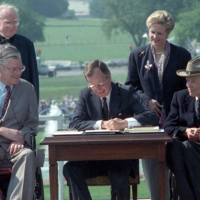