My husband is no stranger to situational depression. He experienced it when his father died, when a beloved pet passed unexpectedly and when his job turned suddenly more stressful and meaningless.

But he didn’t understand clinical, chronic depression. “What would it be like if those feelings lasted for months at a time, or even years?” I asked. He said he couldn’t even picture it. “That’s the way my life is,” I explained. Then he lost his job, and after a brief period of relief from the stress, he finally experienced depression that lasted more than two weeks — two years, in fact, during which he was unable to work.

He did not seek help for it until his best friend and I both proactively encouraged (i.e., nagged) him to do something about it. He’s been on an SSRI ever since and has occasionally seen a psychologist.

Lately, there has been a movement to educate men about mental illness and mental health. Primary among its goals is to help men understand mental illness is a thing that can affect them and there is no shame in asking for help.

Certainly, the statistics show what a real issue seeking mental health care can be for men. Four times as many men die by suicide than women. More than six million men are affected by depression in the United States alone. But men experience societal and psychological barriers to getting help when they need it. Among the excuses you hear are these:

“I can handle this myself.”

“I don’t want to appear weak.”

“I might lose my job if anyone finds out.”

Or, looked at another way, the campaigns against stigma around mental illness have been less than effective for most men. Now the attention to that problem, which is sorely needed, is beginning to be heard and one hopes acted upon.

Still, it’s important to remember that mental illness is not just a man’s problem or a women’s problem. It is a human problem, affecting both genders (and all ages and races) if not equally, then without discriminating.

It is important to get men the mental and emotional help they need, in a timelier and more comprehensive fashion. I would have liked to see my husband be willing to recognize when he needed to get help and to get it without being pushed. But it would be wrong to push the needs of women aside to accomplish this. This is a societal problem, and while right now spreading the word to men is particularly important, our goal should be to make sure all people are aware of the prevalence of mental illness, the fact it can happen to them, and there are places to get help. That message, at least, is not gender-specific.

Photo by rawpixel.com from Pexels 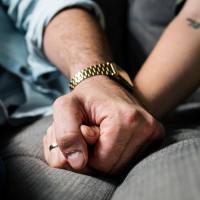