More than six years ago, my son, Alex, attended a summer soccer camp hosted by a high school in our district. Little did we know then, his attendance at that camp would create a beautiful opportunity for friendship and inclusion for many seasons to
come.

Over the years since that summer camp, the team has regarded Alex as a friend and teammate. He has attended their games, cheered them on, and offered pep talks (and some jokes!) on the sideline. He loves being part of their team, and they love having him as one of their biggest fans.

This year, Alex is a member of his school’s eighth grade basketball team. It has been a fantastic opportunity for our community to see just how important inclusion is; it’s really been a wonderful experience. His coach, peers, and support staff at school have been fantastic as we forge a path of participation for Alex. He practices with the team, dresses for games, and runs warm up drills with his teammates. Every now and then, his coach puts him in the games, which has been such a thrill for all of us as the season has progressed.

I post a lot on my various social media platforms about Alex’s participation on the team, and many people are following his season through those posts. A few weeks ago, I received a message from one of the high school soccer coaches, letting me know that he was trying to organize some of the soccer players to come out and support Alex at one of his basketball games. Alex loves an audience, and was thrilled to hear that he may have a cheering section at an upcoming game.

Sixteen soccer players, and their coach, showed up to that game.

Alex was ecstatic, and my husband and I were extremely impressed to see that many kids there. It was a school night, right after winter break, and we just couldn’t believe that so many kids would come out to watch Alex’s game. There wasn’t even a guarantee that he would see any playing time, but they showed up anyway. They cheered on Alex’s team throughout the entire game, and every now and then we could see Alex turn around and beam at them from his seat on the bench.

Fortunately, Alex did see some playing time that night, and his cheering section did not disappoint. Their enthusiastic encouragement made for a very exciting ending to that game! Afterward, the teams disappeared into the locker rooms, and all of Alex’s soccer friends made their way to the gym floor to wait for him. When Alex came out to visit with them, one of the high school kids gave him a hug and told him, “We wanted to be here to cheer for you as loudly as you cheer for us at our games.” 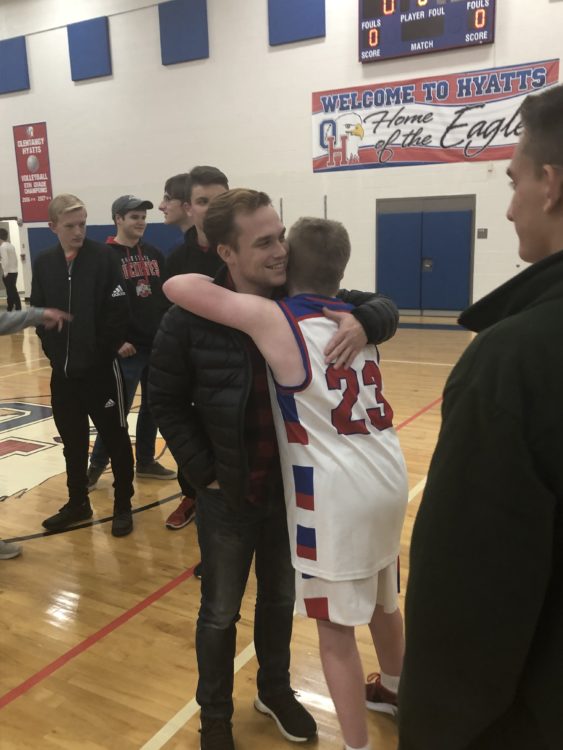 Advocating for inclusion can be really tricky, and incredibly exhausting at times. But every now and then, something like this happens and illustrates just how very important and rewarding inclusion is for all of us. We are so thankful to be part of a community that is willing to include Alex, and we hope that they recognize the gifts that he provides to them as well.