Researchers asked a diverse sample of American adults to watch an identical video of the same 5-year-old child receiving a finger-stick in a doctor’s office. Though all the participants saw the same exact video of the same child behaving the same way, one group was told the child was named “Samuel” and the other group was told the child was named “Samantha.” After watching the video, participants were asked to rate how much pain they thought the child experienced and displayed during the finger-stick.

Ultimately, the group of participants who knew the child as “Samuel” said they thought he was in higher levels of pain than the group who knew the child as “Samantha.” This research backs up earlier studies about the gender bias that exists in pain assessment. Due to common gender stereotypes that “boys are more stoic” and “girls are more emotive,” a boy’s expression of pain is often taken more seriously than a girl’s expression of pain.

“We really hope that these findings will lead to further investigation into the potential role of biases in pain assessment and health care more generally,” Joshua Monrad, one of the study’s authors, told YaleNews. “If the phenomena that we observed in our studies generalize to other contexts, it would have important implications for diagnosis and treatment. Any biases in judgments about pain would be hugely important because they can exacerbate inequitable health care provision.”

It’s important we take pain and symptoms seriously and ignore gender stereotypes. Not doing so can lead to delayed diagnoses and serious health complications.

Have you experienced gender bias? Join the conversation below! 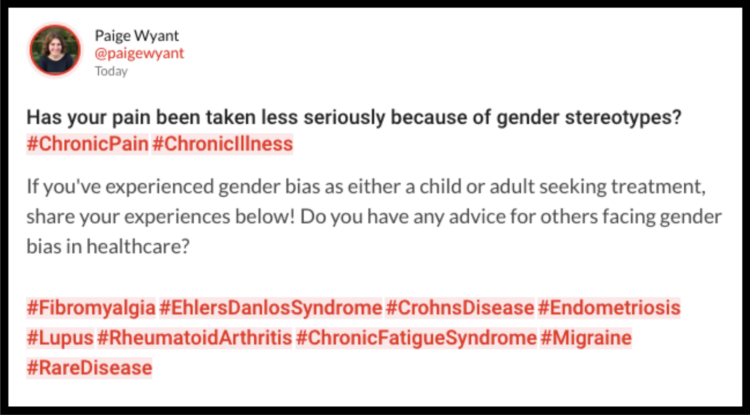 We wanted to hear from some of those in our Mighty chronic pain community who dealt with gender bias during childhood, so we asked them to share their experiences with us.

Check out what they said below:

While it’s critical to address the gender bias that informs how adults perceive children’s pain, it’s also important to remember that gender stereotypes affect the healthcare adults receive as well. As Mighty community member Aimee V.V. commented, “My gender is still affecting how seriously my pain is taken.”

Everyone’s pain deserves to be listened to and taken seriously.