Dating With a Disability Was Awful, But...

What is it like to date with a disability? You really want to know? To tell you the truth, it’s awful, at least in my experience. On top of having all those nerves about meeting someone new, thinking you’re not good enough or worrying about your hair, you have to worry about them rejecting you for something you can’t even control.

I have a pretty obvious physical disability. I was born without a right hand. So no matter how successful I am at hiding that fact by the clothes I wear or how I stand when I first meet you, chances are you’re going to notice, especially since we’ll be the only two people on the date. I am a successful adult who hasn’t let the disability I was born with stop me from doing anything in the slightest. I have a Master’s degree and even a professional license, I drive a non-modified car and get paid well, and I’ve still had men stop talking to me after I told them about my disability.

I made the mistake only once of not telling someone about my little secret before meeting for the first time, and that was a complete disaster. I find transparency is best and to tell them in the messaging phase when we eventually start talking about meeting in person. It’s just fascinating to me to see the different reactions I get when I drop that bomb on a potential suitor. Call it a first of many tests you have to pass before the dating can get serious. Most ask what happened, assuming I was in some sort of a dramatic accident or have some exciting story to relate about the incident. And some seem a little disappointed when I tell them “I was born this way.” Maybe that’s a little anticlimactic for them.

The majority of the men I talk to or used to talk to let it drop after that, the conversation moving to other topics as if attempting to consciously avoid the elephant that is now in the room. I’m almost 100 percent sure though that the majority of the men I’ve spoken to sort of write me off after I mention my disability. They don’t stop talking to me, except for that one guy, but they stop taking our dating seriously. Or they just shift focus to just trying to get into my pants instead of seeing me as someone they could potentially get into a relationship with. No one has come right out and said it, but that’s the feeling I get.

There was one guy who was different. Of course, he asked the question of what happened when I told him. But he actually wanted me to send him a picture of my arm. I was caught off guard by it, considering I’ve spent the majority of my life trying to hide it from view from others to avoid the awkward stares and making a spectacle of myself, which is what tends to happen in public. He had to talk me into it for quite a while. And honestly, it was a little refreshing to be asked to send a picture of my arm instead of some other form of nudity which is what tends to happen. So I decided to meet him after I sent him the picture and he seemed to still be interested.

On our first date he showed so much consideration for me and my being left handed that it took my breath away. He later explained that he had an unfortunate accident with a skill saw a few years back and was forced to use his left hand for everything while his right hand healed. He wasn’t disfigured or anything, but related that situation of having to do everything with his left hand to my situation.

He held my door open not because he figured I couldn’t do it but because it was the gentlemanly thing to do, and trust me there is a definite difference. He let me sit on the left side whenever possible and wanted to drive more often than not so I’d be on the left, so he could hold my hand while he drove. He still shows consideration for the things I do that may not be as easy as I let on.

In my opinion it takes a special kind of person to be with someone with an obvious physical disability. It takes someone willing to look past the physical to who you are inside. Don’t get me wrong, I’ll be the first to admit that only having one hand looks really weird. I don’t like to look at myself in the mirror or look at pictures of myself for just that reason. I can almost forget I have a disability by how well I’ve adapted to life with only one hand, but when I look at myself in the mirror or in a picture I’m only reminded of my physical shortcomings. But for him to be with me and love with regardless of that is a virtual miracle — one I am thankful for daily.

When I tell him I can’t do something, he always challenges me to get it done. He doesn’t let me use my disability as an excuse and always pushes me to be better. That is the definition of a loved one: someone who doesn’t let you doubt yourself or quit until you try it for yourself. That is the way my mother raised me and that is how he continues to push me to this day.

Dating was awful from this person with a disability’s perspective; thank god I don’t have to do that anymore.

Share
or  Copy Link
Link copied to clipboard.
Be first
12 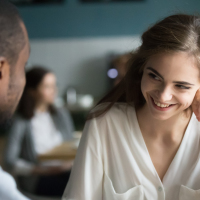