When I Was Afraid to Talk About My Disability

As a child I didn’t really understand disability, in that I didn’t consider how sometimes it can cause division between those who are disabled and those who are able-bodied. I still on the whole don’t, but I notice it a lot more. Yes I was in a wheelchair, but apart from this I was able to do most of the things the rest of my class did. What was the big deal? But I also think as a child, one is lost and found in their innocence and so the full sense of the word diversity, or the idea that diversity could imply division, did not really register. Looking back I was a happy, carefree child, always up for fun and telling horrendously bad jokes (this has gotten worse over time). All I wanted was for everyone to be happy and have a fair chance. I still do.

My belief that there were no differences that should make one be excluded or exposed to adversity helped me overcome things that would be otherwise be thought of as barriers. If I did find myself facing some kind of uphill struggle, my cerebral palsy was the last reason I would ever think of as a reason for such events.

The secondary school I went to also had provisions for physically impaired students; therefore I was able to engage and strike up friendships with others in a similar position to myself. However, I don’t remember talking that openly about my disability. Even though now I was becoming more aware that not everyone saw each other as equals, I still didn’t realize just how crucial it was that I recognize and speak out about my experiences. I was still trying to somehow hold on to a “normality” of teenage life and subconsciously thought this group of friends would understand my perspective without me ever mentioning a thing.

Now I wonder if things would have been different if I had been more open about how I handled certain conversations, rather than letting my proud ego take control. Whenever it came to these types of scenarios, I would find myself in a fluster, confused as to why the subject had been brought to the surface. It should be simple, right? I mean, I was sitting quite literally on that million-dollar answer!

I remember this particular day, a good few years ago now, when I was confronted (or at least that’s how I internalized it) by this topic of conversation. A friend of a mutual friend was interested to know about my disability, more interested than I ever was. He was studying physiotherapy and was just curious about how CP affected me, rather than taking the textbook’s word for it. I was cagey with how I responded and didn’t give much away. I didn’t know how to respond, and still had that nagging urge not to cave in to what was quite visible.

He probably thought “You snob,” as I wheeled away, and I wouldn’t have blamed him; after all he was trying to get to know me.  CP will introduce itself, even if I don’t want it to, so I should not think or act like it’s non-existent. I wanted to carry on with my day and carry on distancing myself from what was staring me in the face, from the fact I rock a chair with wheels, that I get frustrated sometimes at the tremor in my hands and my speech difficulties, and that when I say “just one minute” I actually mean two or three or five. I didn’t want to discuss the fact the some of my differences are visible and some people may want to know about this particular aspect of me.

It’s only the last couple of years that I’ve become more comfortable sharing my thoughts and experiences with CP, finding writing to be the means whereby I could achieve this. By sitting in front of my laptop and allowing myself to write, I was able to release the thoughts I found difficult to say aloud. By expressing myself in this way I realized just how important it is to share parts of my story, to not only share my struggles but also illustrate how I overcome those struggles.

It’s difficult to break free from being confined to a set of rules about what to disclose. Society has conditioned most of us so well that speaking about things that have inspired us, things that change our perspective, things close to our hearts, things that are reflected back to us in the mirror can trigger a pounding heart and we become unable to express our thoughts. We find that the only way of relieving the symptoms of being vulnerable is by stepping away from it. But it is crucial for our well-being that we don’t trap ourselves and create our own prison. Once I started to reach out and share my thoughts, I realized there are many others with similar hurdles who also unsurprisingly found it hard to find the right words to illustrate their world. Only by using our voices can we find the strength not to be governed by fear. By helping ourselves, we can also help others.

Try not to be afraid of who you are or of how others see you. We’re all trying to figure out our way in the world; no one has a right or wrong way of “doing life,” but we can be a light for each other when in a dark stretch.

Though diversity can bring up thoughts of differences and division, is this really a bad thing? Every one of us is different. But by sharing our stories and helping each other be triumphant in the struggles we experience, we can unite. Speaking the truth is scary, but what’s even scarier is not saying anything at all and not letting ourselves be free. 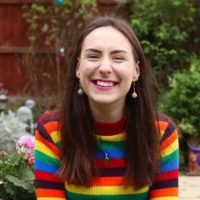