The Biggest Lie I Tell Is Only 2 Words

“How are you?” someone asks.

But rarely will I tell the entire truth, because who really wants that answer?

Like right now… I am shaken from a horrific nightmare I had when I napped this morning. Did the person who just asked me how I am want to hear I feel like I’ve just suffered a Dementor attack? Or do they want to know that I am cold inside and have a chill I cannot shake?

Did she want to hear I dreamt my mother died of a drug overdose (she’s been sober for over 24 years) on Christmas Day? That I had to tell my sister, but one of my family members didn’t honor my request, so she found out in an unfortunate way? Did she want to know my nephew, who adores his grandmother, had to be told at only 8 years-old that she was dead and it happened on such a magical day for children? That I knew Christmas would forever be ruined for him?

Of course she didn’t want to hear all of that.

She likely wouldn’t have known what to do with it, or what to even say. I can’t fault her for that either, because I’m the one who dreamt it and I still don’t know what to do with it. When these moments occur  —  and they do every day when you live with chronic pain, anxiety and other mental health issues  —  I can’t help but wonder why we ask that question? Why do we insist on asking each other how we’re doing, when we don’t really want to know the answer?

I’m the exception, though.

I don’t ask that question unless I really do want the answer… no matter how ugly or unpleasant it may be. That being said, even in the rare cases when I know the person asking me is genuinely interested, it’s still not always easy to share the truth. So I understand why some people  — even if they know someone truly cares — will answer with a two-worded lie… or the casual “I’m OK.”

Then I stop and realize while I’m not OK, I am OK.  I’m OK in the sense that I’m surviving… things are adequate. It’s my baseline and compared to where I’ve been or could be, sometimes OK is all I can hope or strive to be.

And still, even in those moments, when I say I’m OK, I know it’s not the whole truth. It’s just all the truth I can spare.

And sometimes that is OK, even when I’m not.

A version of this story originally appeared on Medium.com. 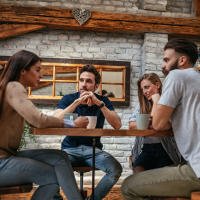