When a Plane Crash Reinforces Your Fear of Flying

The recent Ethiopian Airlines 737 Max accident has created a stir for people who already experience flying anxiety. For people who aren’t afraid of flying, an incident like this tends to be just that — an isolated incident amongst millions and millions of safe flights. It is, of course, always disturbing and upsetting to see the loss of life. At the same time, however, these incidents don’t tend to deter the non-fearful flyer from flying. (Probably not much differently than you feel with driving. If you hear about a fatal car accident, it likely doesn’t make you feel that you should stop driving.)

When someone is afraid to fly already, seeing an incident such as this one generally causes a setback. And because of the two 737 Max planes having similar accidents within several months of each other, the one most recent incident can start to feel less isolated, which can concretize the feeling that there are actual reasons not to fly.

What I’ve noticed over years of helping people through fear of flying is that the once-in-a-great-while when something happens, people are always ready to tell me, “Look! See, planes crash. I was right. I should be afraid!” The literally one in millions incident starts to validate their fear that they will be the one this happens to. It becomes very easy to ride this renewed wave of fear into what I call “reverse normalization.”

For those of you who are aware of the method I created to help people overcome fear of flying, normalization of the brain is one of the significant components of being able to overcome fear of flying. We may know on conscious or logical levels that something is safe — we see the numbers and know that flying is generally safe, in our minds — but subconsciously and emotionally, that logical and statistical knowledge does little good to help us feel relaxed and safe if we’re afraid of flying. Fear of flying is an emotional, mostly subconscious, process. Helping the brain understand and internalize the normal and routine process of flying in the world is one of the significant pieces of helping shift this emotional process. (It isn’t the only piece, but it’s a significant one.)

It’s important to know that just because one feels fear doesn’t necessarily mean there is imminent danger. When you drive your car, you are far more likely to end up in a catastrophic situation than when you are flying. But you don’t feel fear if you’ve been driving without serious incident for many years (and even if you have had a serious incident, you may still not feel fear because you’ve lived through it). This is your brain being in a normalized state to driving. There are many, many areas in people’s lives where they experience normalization where there is actually a decent amount of risk involved. If your brain actually allowed you to experience fear any time there was some actual risk, you wouldn’t be able to function in your life at all.

So, when the once in a while accident happens, a fearful flyer will start reading the news reports, following the aftermath, wanting to hear what happened, what it was like in the cabin, cockpit, and so on and so on. The result of this (among other negatives) is a reverse normalization in the brain. This doesn’t simply mean that it undoes normalization. Reverse normalization means that your brain is normalizing the idea that flying is actually dangerous. That these bad incidents are the norm. That you would be lucky to survive if you were to fly. When these incidents occur, people tend to binge on them, feeding their brains crash material heavily for a period of time. While in this mindset, you are taking in far more negative flying information than positive information. It’s impossible to be cognitively open to the normalcy of millions of planes taking off and landing without incident when you are binging on crash material of one.

There are more than 100,000 flights that take off and land every day (check FlightAware.com if you’d like a reference). This means that every 10 days, more than a million planes take off and land. With 4.5 months between the two 737 Max incidents, we can estimate that more than 12,000,000 flights took off and landed (and probably a decent number of 737 Max planes as part of that number). I don’t expect these statistics to necessarily make anyone feel better (nor am I trying say anything about the safety of the 737 Max, as that’s not my area). But what I am attempting to illustrate is how easy it can become to lose perspective when incidents happen, and allow your mind to go down a rabbit hole of hyper-focusing so much on the incident that the larger picture becomes lost.

It’s important to be able to maintain perspective when life reminds us that there are no guarantees. To remember that not only are there more than a million flights every 10 days, but there are also many risks we already take every day on the ground and in their worst possible moments, any of them can get us, no matter how in control we may feel on the ground. We can’t expect anything in life to be 100% safe, however it is possible to help ourselves overcome our fears and keep a reasonable perspective to function in the many areas of life even without having guarantees.

Share
or  Copy Link
Link copied to clipboard.
Be first
Be first 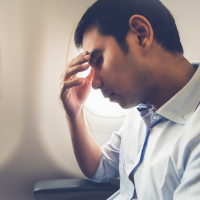