“Mr Bowerman, I am pleased to inform you that Congressman Engel is a co-sponsor of HR 873, the Transformation to Competitive Employment Act. Your family proved to be some of the most effective advocates I have met in my 38 year career,” opened an email from a congressional staffer with whom my family had previously met to advocate for the Act.

Three months and several emails earlier, I was planning our family spring break to Washington DC and thought it would be interesting to meet with our congressional representatives to expose our children to advocacy efforts.

I sought advice from Heather Sachs, Director of Policy & Advocacy at the National Down Syndrome Congress (NDSC), on how best to coordinate a meeting. Heather educated me on a current legislative priority related to employment law and shared the playbook to successful advocacy. It turns out, anyone can do it.

Here are the basics:

Request a meeting through your House or Senate representative’s website, preferably four to six weeks in advance. Indicate the legislative priority to be discussed, either a specific Act, or general topic, such as education, employment, research, to ensure the relevant subject matter expert on staff attends.

Two days prior to the scheduled visit, re-confirm the meeting and remind the staffer of the focus topic.

On the day of the visit, dress up, arrive on time and treat it like a business meeting. A quote attributed to Woody Allen comes to mind, that 90 percent of success is “showing up.” Our girls wore dresses. Our boys wore sport coats and ties. The positive impression made by my children’s formality lasted long after the shirts became untucked. In contrast, other families wandered in and out of the waiting room, sporting cut-off shorts, flip flops and an air of entitlement. In the same breathe as they blamed security lines for missing their appointment time, they requested a private tour of the capitol building. One mom wore a Disney t-shirt which aptly reflected her posture — that her visit was simply the next attraction at the Capitol Hill amusement park. 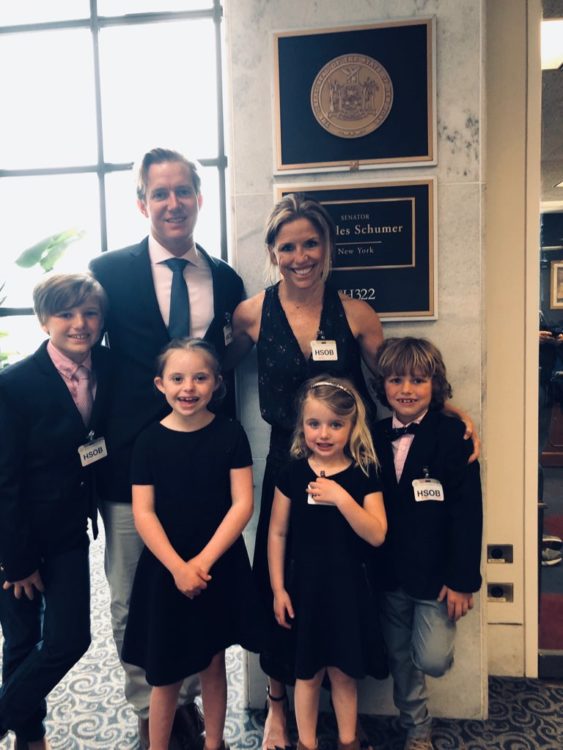 We were welcomed by staffers who came prepared to discuss the legislative initiative and were receptive to our input. Staffers were genuinely engaged in the discussion and commented that they enjoy, though rarely get the opportunity, to speak with families. It turns out much of their time is consumed fielding requests from paid lobbyists.

Moreover, they acknowledged the challenge in keeping up with the high velocity of Acts that are proposed and thanked us for bringing a seemingly productive piece of legislation to their attention.

Each of my children prepared a short overture about why he or she felt strongly about the Act. When it was their turn to speak, each sat up tall, squared their shoulders and articulated their points. They felt empowered. It’s hard to ignore a 10-year-old who explains why an employer shouldn’t be permitted to pay her less than minimum wage simply because she has a disability. And when her three siblings chime in that their sister should have the same rights and protections as everyone else, it’s impossible to ignore.

Advocacy works. Our efforts left a profound impression on my children and educated them on the legislative process beyond what can be gleaned by reading a textbook. They learned they might be heard if they care enough to find their voice. And, being heard just might make a difference.

To be sure, we were fortunate that we visited a representative that employs a receptive staff and is politically aligned with supporting disability rights. Not everyone has a similar experience. As weight loss ads caution, “individual results may vary.”  But unlike dieting, advocacy is rewarding regardless of the outcome.

It was an experience my children won’t forget and represented a first step in a lifelong journey to “dent the universe” in their own way. And we didn’t need a rocket ship to do it, we just needed to show up.