When My Autistic Teen Invited Me to the Movies

My son, Ryan, finally got to see the movie, “Pokémon Detective Pikachu” last week. He has been waiting for weeks. I knew he wanted his big brother, Kyle, to go, so I had hoped maybe just the kids would go and spare me from leaving a beautiful poolside evening and having to pay an additional $11 for a movie I anticipated would be quite dreadful. Well, it became apparent that he really, really wanted me to go, too.

I assumed that the main reason my presence was requested was because I always go to the movies with my son and changes in routine stress him out. I assured Ryan that Kyle would get him popcorn, a soda, etc. and that a little change in routine wouldn’t be the end of the world, but he clearly wanted me to be there. I dragged myself out of the pool, took a quick shower and tossed the keys to my oldest son. (The beautiful poolside evening I didn’t want to end happened to include two mojitos for yours truly.)

It only took about 15 minutes into the movie for me to realize that my presence wasn’t needed because Ryan was afraid Kyle would get the wrong size popcorn, nor was I there because that is our routine, I was there because my son wanted me to share in something he loves. Even in the darkness of the movie theatre, I could see Ryan’s smile as he quietly explained the various Pokémon throughout the movie, taking pride in being an expert and clearly loving sharing all of his expertise with me. There are very few social occasions or outings where my son feels like an “expert,” so of course he was thrilled.I honestly have no idea what happened in that movie and not because of those two mojitos. I had trouble following along because I spent most of those two hours enamored with my son’s joy and feeling so incredibly grateful that he eagerly wanted to share that joy with me. When Ryan declared that it was the “greatest movie of all time,” I didn’t disagree. I just leaned over, kissed his cheek and thanked him for including me.

There will be other summer pool nights. An evening connecting with my son is an incomparable gift. 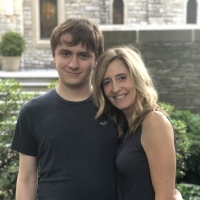