Pre-K has been going well for Evelyn – she loves her class, calls everyone her best friend, and has been able to maintain her energy levels most days. She’s worked up to attending for two hours every day now. She loves her awesome para teacher, and up till this week she’s managed to avoid all the bugs (this week’s sickness is her first of the semester, and fingers crossed, she seems to be on the upswing). I’ve been so proud to see her march off to class without looking back. Her first field trip was this week.

She’s getting to do “normal” things! Be a “normal” kid!

But one activity, coming up on Monday, is really getting to me.

It’s “Career Day.” All the kids are supposed to come to school dressed up to represent what they want to be when they grow up.

Somewhere in the recesses of my mind, I knew this day was coming. My son had the same pre-K teacher, and this was one of his favorite days. It was one of mine, too. But I have this little coping strategy called “Don’t think about it and it isn’t true,” so I have not thought about this day or its implications for my sweet girl.

Evelyn’s POLG/mitochondrial disease is considered a childhood disease. I don’t think about or talk about what that means most of the time (see previous coping strategy) but, in a few words, it means most kids with POLG don’t live longer than childhood. The few adults I’ve found diagnosed with a similar type of POLG typically do not have careers in the way most people think of them; they often require complex medical care and do not have the energy to work hours at a time.

So, as a rule, I don’t ask Evelyn what she wants to be when she grows up. It feels like a mix between a lie and make-believe. At the same time, I don’t want to not ask her, because that feels hopeless and defeatist, and that too, feels like a lie. So I don’t think about it, and for a minute, it just disappears and doesn’t matter.

When I see the note to parents letting us know that Monday is Career Day, first I stare at the paper until my eyes cross. I feel numb. Then I feel my tears falling on the table. I wipe them away and turn to Evelyn, resting on the couch watching “Ryan Toy Review” on her iPad. She’s sitting there, healthy and strong, eating a snack and pushing me out of her way when I sit down too close.

I say, “Hey Evie, can you pause it for a minute?” She pauses her show and turns to me.

“Hey, you know, when Tez grows up he wants to be a chef. For a job. He wants to go to work every day and make food for people. What… What job do you want?”

I can’t make myself say, “When you grow up.”

When my healthy, typical son was in pre-K and dressed like a chef for Career Day, I never once considered what this day would feel like if I didn’t just inherently believe my son would be a healthy and strong adult who could be anything he wanted to be. I dressed him up, took pictures, and wondered to myself if he really would be a chef, or if he would change his mind and be something else.

For the record, she wants to be a doctor.

My little girl wants to be a doctor when she grows up.

Share
or  Copy Link
Link copied to clipboard.
Be first
431 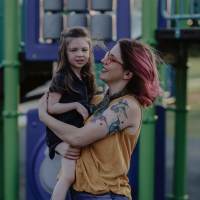