Why I Choose to Parent Two Children With Down Syndrome

“If we are to achieve a richer culture, we must weave one in which each diverse human gift will find a fitting place.”
— Margaret Mead.

As far back as I can remember, I have had a tender heart for those who have challenges that limited opportunities for a rich, full life experience which I believe to be a god-given right, equally dispensed to all. I see all humanity as having a divine purpose, each of us playing an important role to the whole. Since childhood, I’ve been passionate about empowering people to explore and expand their unique gifts to bring them happiness and fulfillment. Diversity is a beautiful gift; an opportunity for us to help one another and grow together in love, compassion, and in our humanity.

Somehow I understood this at an early age. So it was no surprise when it came time to go to college, I pursued a degree working with what was termed at the time as “special populations” and it directed my interest in helping those with disabilities. As part of the curriculum, in 1985, we visited Pineland Center, a state institution in Maine where adults and children with disabilities and psychiatric conditions were warehoused. It was a horrific sight, one that has been etched on my soul. The chaos, filth and neglect overwhelmed me. There were adults with hydrocephalus lying in cribs lined up against a wall. They remained there all day long. People with Down syndrome were walking around, clearly disturbed by those with apparent unmanaged psychiatric conditions who were screaming, yelling, pacing. There was no respect for humanity. It was clearly an institution where society’s rejects were placed to be invisible to the public. That day, a passion was born in me to do everything I could to put an end to this mistreatment and segregation, and to be an advocate for people with disabilities. What I witnessed was an aberration, an indignity to the human soul.

By the age of 25, it became my heart’s desire to adopt a child with a disability. It wasn’t until my early 40s when life came together for that to occur. But before plans for adoption were underway, life handed me a pleasant surprise. I became pregnant unexpectedly… at 43. I refused all the tests and became frustrated with my doctor for continuing to press me on the issue for months on end. Nothing those tests would reveal would change anything for me. The notion that having Trisomy 21 would be so horrible that a child who has the condition should not live, filled me with sorrow and indignation. The medical community is leading parents down the path of euthanizing their children through ignorance and gross misinformation about the quality of life for the child and the family. It was infuriating to continue to have such a preposterous suggestion posed to me at each doctor’s appointment, particularly when I told the doctor to stop pressing me on the matter. I experienced first-hand the pressure tactics employed by the medical community. Thank goodness I was informed and strong. If I had given into the pressure, I would not have my son and that would have been a loss not just for me, but for society. He is a gift and a source of happiness and joy to those who come into contact with his beautiful soul.

Though none of the ultrasounds revealed anything out of the ordinary, I had an intuition that my son had Trisomy 21. So when he was born and a physician came in to tell us that he thought Liam had Down Syndrome, I wasn’t surprised. The next day, the same doctor sat us down and soberly stated that Liam did indeed have Trisomy 21. I looked at him, waiting for him to say more. I interpreted his seriousness to mean some truly dire news was forthcoming. But he said nothing further. Big sigh of relief. Liam has Trisomy 21? That’s it? Thank goodness! The medical team was surprised by our easy acceptance of this fact and I thought they were going to name a hospital wing after us.

When my son was 4 years old, I re-visited my desire for adoption. I always felt it was in my life’s plan to have a child with a disability and now I had one. I asked myself, “Wasn’t that enough?” Like other parents of children with disabilities, I rose to the challenges, relished in the joys and became a good lay teacher, speech pathologist, occupational and physical therapist. I found energy and enthusiasm for being a hands-on, involved mom to a child with bonus chromosomes. Who knew! But the feeling gnawed at me that, no, this isn’t where this road ends. I must find a child with a disability who needs a family. Since Liam had Down Syndrome, we decided to adopt another child with the same condition because we had all the supports in place. But could I handle two children with Down syndrome? Or two children with any disability for that matter? Plus adopting an older child has its own unique set of challenges. Was I equipped for this? Then I remembered something I had recently read. The article stated that most people who adopt children with disabilities are just regular people, regular people with the willingness to try. As it turned out, I didn’t have to be extra special, I just had to do my best to love and parent that child. I could do that.

A year after the adoption process began, a nearly 3-year-old Armenian beauty named Katrina joined our family. Upon visiting the orphanage, the parallel themes of human isolation, shame and invisibility inherent to both the Pineland Center and the orphanage were immediately apparent. The remembrances of the Pineland Center and the stark reality of life at the orphanage created an instantaneous cacophonic reaction in my entire being. I held my breath as a powerful wave of emotion rushed through me. This journey had taken me full circle. But this time I was empowered to radically change one life while advocating for the ones left behind.

When the Armenian judge asked me why I wanted to adopt this child, I told him I wanted to give her everything she needed so she could be successful in life and experience her full potential. He had few expectations for any child with Down syndrome and told me I was overstating what I would be able to deliver and what she would be able to accomplish. I thought to myself, “We’ll see about that.”

Flash forward four years. My first-grader loves to read and is quite the book worm. She is also a fearless and talented climber and gymnast. Like her brother, she is fully included in general education and is being educated using grade level standards with modifications when necessary to demonstrate her level of understanding of the grade-level curriculum. She will have every opportunity to earn a high school diploma, go to college and achieve her dreams. There have been many times when Katrina has achieved a milestone that I have imagined standing in front of that judge, saying, “I told you so.”

Disability is natural. We need not fear it. My children are not their disability. People with disabilities have lots of abilities and unique gifts. They are simply part of the continuum of diversity for which we all belong. 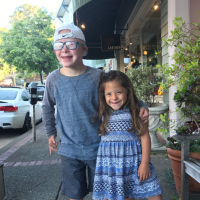