Between the Doors of a Psychiatric Hospital

The EMTs gingerly wheeled me through the doors. “Good luck to you…” their voices trailing off, leaving me alone and strapped to the gurney in the middle of the lobby.

The lights were low. Some of the patients were still up sipping coffee. The nurses appeared unsurprised at my arrival, although everything inside me felt shock. An older lady came over and explained that I couldn’t leave and that they were going to take my phone. I was locked in. She was so gentle and unassuming. She calmly explained my rights and at the same time took my stuff. She was good at that.

A different nurse took me by the hand and led me into a room to strip down. She made me lift my breasts and then looked down at them as if she’d seen a million of them before. I was handed a thin blue gown and led down the hall with the flickering lights. My room was all the way at the end. It was 2:30 a.m. I was expected to sleep. I tiptoed past my roommate and laid down in the dark. There were two windows above me that let in the moonlight. It felt like forever before my eyes closed.

The first morning I stood on the cold wooden floor in my room, my heart sunken and spirit embarrassed. I wore my tousled hair in front of my face, hiding deep inside of myself, hoping no one would notice I was there. My voice was withered. I was kind of freaked. My mind raced. People shuffled in line for meds with a vacant look in their eyes. They looked past you and through you at the same time. The walls were as barren as the days. Everyone was searching for something different, expecting this hospital to deliver it.

No one reached out to me at first. Who could blame them? I’d sleep past breakfast on purpose so I could eat alone. The showers were cold, the windows had bars and I was pissed. I had a roommate I looked at twice. I didn’t really want to participate. I wanted to be there but I didn’t exactly know what I wanted. I just wanted them to fix me like all the others must have wanted. And I wanted hot showers. It seemed like every hour I’d hear a nurse shouting down the hall, announcing that it was time for group, but I could barely get my hair out of my face. Groups were for the others. I was here to regain my sanity, I wasn’t here for groups.

It was on my third day that I met Byrn. He was sitting alone, but there was a light in his eyes. I wondered to myself why he was even there. I don’t remember how we struck up a conversation, but we played Uno until 1 a.m. We spent that night being so many things: goofy, loud and rebellious. Maybe even a little obnoxious. It was pure fun in a place filled with pain and we found it in each other. After that, we spent our days together and found others to join us, our group becoming an eclectic band of misfits. It became OK that we were in the psych ward instead of feeling shame about it. At night the conversations sometimes became racy, but not in a creepy way. People came out of their shells. Things felt safe.

I came out of my own shell. I gradually started attending the groups. Sometimes I’d color. Or journal. I started waking up on time and going to the cafeteria with my friends for breakfast. I started calling my family a little bit less and engaging more. I loved recreation time. It was basically P.E. for adults. We played volleyball and I savored every minute. I ran and jumped with glee. When I played, I could remember what it was like to enjoy something again. I looked forward to it. It reminded me of what it felt like to be a child. To be hopeful.

I didn’t know which day I was going to leave. No one knew. It was a popular topic on everyone’s mind. It seemed like on any arbitrary day someone’s name could be called to be released. Departure days were the worst. Everyone always cried. Everyone hugged. Everyone waved. And then everyone left behind is in a state of stunned silence. After Byrn left, I burst into tears and lay in bed for what felt like an eternity. We had all grown close. I felt lucky to have found people who understood me. Now, one by one, that web of support was ripping apart. Most people didn’t stay for more than a week. The beds were always filled with different bodies daily. Learning new names hurt. I didn’t know how to feel. No one did. We simply retreated to our rooms and licked our wounds. And after a while, we’d meet in the common room to talk about our missing friends. Then we went on. Everyone always did.

I spent my whole stay waiting to leave until the day I was set to go. They’d told me the day before and I felt a pang in my stomach the second the words left the nurse’s lips. She searched my face for excitement, but all I felt was shock and recoil. Could I live on the outside? I’d gotten used to the safety of the hospital and how organized everything was. It was easy there. I was scared. I spent that night watching the moonlight through my window and wishing I had another day. I thought about my friends.

Everyone hugged me, as we always did. Everyone waved. Someone new was being admitted as I walked out. The fresh breeze hit me and drew my attention elsewhere. It felt like it had been a thousand years, but today was my first day.

Photo by Nicholas Green on Unsplash 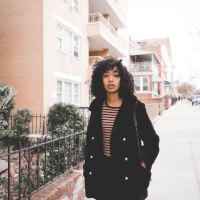