Why We Need to Prioritize Special Education Programs

I am the mom of a child with an invisible disability. She is beautiful and bright, but her struggles are many and her pain is deep. I knew her path was going to be unique before she was born. Every prenatal check-up and ultrasound yielded new questions for the OB, all with little answers.

She is my second child, so perhaps that was why my radar was keener than it would have been had she been my first. Milestones were missed and every visit to the pediatrician was a lesson in humility and tempering my own fear. For every question asked, “Is Magda rolling over? Is she eating solids? Is she pointing?” the answers were no. Typically, the response from the doctors would be to blame me. “Well Annie, if you don’t put Magda on her belly, she’ll never learn to roll over.” “If she gags and vomits with what you feed her, try something else that maybe she’ll like.” “You need to engage her more.”

At 10 months after a chance meeting with a social worker at a park that led to a follow up appointment with a new pediatrician, she underwent a battery of diagnostic studies to better understand the delays she was demonstrating. She was identified as having a global development delay and sensory processing disorder. She qualified for early intervention services through our regional center and therapies began both in our home and at their clinic. Our family grew to love her therapists and they became part of our village — our family.

As she approached her 5th birthday, it was time to reach out to the public schools as she was clearly a child who was going to need specialized support and services.

That is when the world got dark.

Navigating special education in public schools is a minefield full of traps and hidden rules, which can be especially true if the child’s disability is invisible.

Although she is smart and beautiful, her unique mind can make learning and tolerating sensory stimuli incredibly difficult. We had a choice, accept the rose-colored, dismissive perspective of the school district, or dissent.

We chose the latter.

The choice to advocate and not accept the school’s lack of supports led us on a path of discourse, disagreement, countless sleepless nights, irritability, self-doubt, loss of friendships, loss of community, litigation and ultimately a move out of town to a nonpublic school which uprooted our entire family.

There are millions of parents just like us who struggle getting their children appropriately served in school. Our public school system is not equip to handle the increased number of children who need specialized support. IDEA is grotesquely underfunded and so the burden of funding specialized programs gets kicked down to the state and ultimately to the local education agencies (or school districts). The school districts are then forced into a horrible predicament of only servicing students with the most obvious needs, while those whose disabilities are invisible, but often equally profound, are denied access to help. The results can be catastrophic.

This is a truth that needs to be spoken loudly in many public spaces. There are too many families being gaslighted by school districts, told their children are “fine” and that they don’t need any help to be successful in school. There are countless of children with autism and sensory processing disorder (as well as ADHD and specific learning disabilities) that are overlooked by our schools. What happens to these kids? What trauma do they experience unnecessarily because they are being under-served, because they aren’t being seen?

Both as a means of coping and in the hopes of spreading awareness and ultimately enacting positive change, my husband has shared our story in his recently published memoir, “Daisy Has Autism.” It is our story of navigating the public school system in Davis, CA. It is a critically important book for a number of reasons as it acts both as a mirror for those of us living with the challenges of trying to gain appropriate help and support for our kids, and it acts as a window in for those who are not.

All we want in this life is to feel seen, to feel included and to feel like we matter. As a parent, I will fight until that is a reality not only for my daughter, but for everyone’s children. 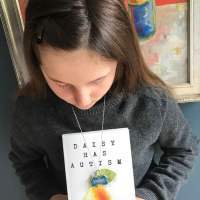