When I found out I was having surgery for the third time in my 35 years of life, I thought to myself: this is going to have a major impact on my mental health. I prepared for that because I’m someone who must be prepared for everything, and know what I’m dealing with long before anything.

For eight months, between August 2018 and March 2019, I had such a load of anxiety on my shoulders waiting for surgery on my splenic artery aneurysm.

I spent seven months trying to get someone on the same page as me — that I had a symptomatic aneurysm and that these symptoms were becoming more aggressive. They weren’t going to go away and get better on their own. I knew this. I also knew, based on the nature of these symptoms and how they were progressing, that I didn’t have a lot of time. I experienced a great deal of depression in my failed efforts to get people to realize I understood very well what was happening to me.

Symptoms have a way of presenting themselves in disguise. By that, I mean what I was dealing with wasn’t benign stomach issues; it was a vascular problem, and they were leading others to believe it was a digestive problem. Just the waiting, going from hospital to hospital and not knowing what to expect added an element of overwhelming fear to the equation. Needless to say, I never got any reassurance that everything was going to work out in the end. To me, I didn’t know what “the end” meant, and that skyrocketed my anxiety.

We try to be the best advocates for ourselves. Even though I did everything I could throughout these eight months of waiting, wondering and worrying, what I should have done was have more faith in the decisions I made that got me to the place I am today. But I couldn’t have known what the future was going to bring, especially in the midst of waiting for surgery and hoping nothing happens in the meantime.

Surgery takes a big toll on our mental health, and I understand everybody has different ways of coping with these significant life events. When I have depressive or troubling thoughts, I say to myself: “This is just me recovering from surgery.” Giving myself the answer, acknowledging these difficult and troubling thoughts and feelings allowed me to overcome them.

If you’ve just had surgery and it’s changing your life, know you’re not alone. Four years ago, I had a surgery that, afterward, launched me into full-body chronic pain from fibromyalgia and it is now a daily battle. I know the struggle. About six or seven weeks post-procedure/surgery, somebody asked me how my life has changed since the surgery on my splenic artery aneurysm. The answer: everything has changed.

My entire circulatory and vascular systems have changed. My perspective on life has changed (for the better). I am doing everything I can to get my life back (after several months of being bedridden with chronic pain and misleading and debilitating symptoms). But healing takes time, and that’s OK.

Photo by Kinga Cichewicz on Unsplash

Share
or  Copy Link
Link copied to clipboard.
Be first
28 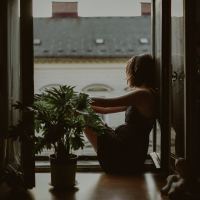