It was just a dance recital. Or was it? Back when we were told our unborn daughter had Down syndrome, and many significant medical issues, I remember looking at the numerous 8X10 dance pictures of our other daughter that were plastered all over our office and house. I remember thinking we were “lucky” that one daughter was able to take dance for so long, “lucky” that one daughter was “so perfect.” Would we be able to plaster 8X10s of  this new baby girl dancing all over our office and house? I had no idea, just simple faith and prayer.

Yasmine Faith does have Down syndrome, she is a healthy, happy and beautiful girl. We think she is perfect.

Fast forward to Yasmine’s third dance recital. Yes — her third recital. By this time, I felt like an old pro when it came to mothers being at dance recitals. Eleven years with Nia, and now it had been three with Yasmine. We had dozens of recital costumes, literally, as I had saved all of Nia’s, and recently washed and packed them.

This third recital was no different than the ones before, except for a few minor points. Yasmine missed the class where all girls practiced in their costumes as we were at UVA seeing her big sister who was now in college. She also missed the group dance pictures because we were at my brother’s funeral. She had pics privately done at a later date, and they were the best ones she had taken so far. We loved her hot pink and silver costume! 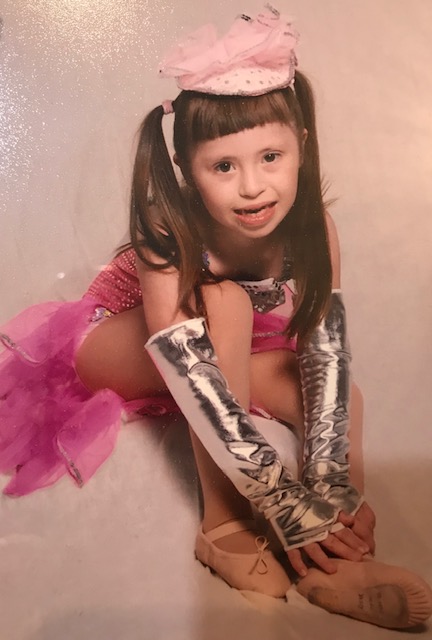 So when it came to the dress rehearsal, being a pro, I had all the backup necessities in baggies: hairpins, extra tights, lipstick, wipes, safety pins, etc. A mom has to be prepared for anything at a recital. We walked into the dressing room with her costume in my hand. I remember seeing the girls in her class and thinking I was in the Twilight Zone. We were with girls who I thought were in her class, but they were all in a different costume. All of them. They had light pink and silver costumes — not the hot pink costume Yasmine wore and had her pictures taken in. I then realized Yasmine had last year’s costume, with this year’s silver gloves and light pink hat. That night my husband and I frantically searched the house and found the correct costume after about an hour. That was quite a relief!

The night of the recital came and went. Yasmine danced well, as she had the past two years, and we had another year under our belt. I was so glad she had the correct costume, just like everyone else. I was grateful she had friends who were patient with her, and so kind. I was grateful for the mothers who held her sweetly and helped ease her intolerance for loud music (church, concerts, movies, and recitals can be very loud).

My family and I walked out to our car, praising Yasmine for the good job she had done on stage. Then another mom shouted out for me and asked where Yasmine’s costume from the night before was? I laughed, remembering my mistake, and told her, “I got it right this time. Last night I messed up.” She looked a little confused and then honestly stated, “I thought she had the right costume last night. I thought she was the leader and that was why it was a tad different.” This mom was sincere. Yasmine had led the girls off stage after all. My goodness, all this worrying we do about “seeming perfect,” doing the best for our children, and does that all matter in the long run? If we had not found the right costume people probably would have thought she was the leader — her other costume blended very well.

I realized immediately this was not “just another recital,” this was proof of how our society has changed for the better. Not only can a child with a disability dance well right along “typically developing children,” she can count on them, their families, and wonderful teachers, as friends. And better yet she can be seen not as a “token,” but as a leader. This is the part of inclusion that is so hard to explain — the immeasurable ripple effect.

Yassy went on to dance at that same studio for nine years, taking tap, ballet and jazz classes. When she stopped dancing, she took up yoga. Now, Yassy is a senior who is 100 percent included in general education classes in high school.

Other stories from Greta Harrison you may enjoy:

A version of this story originally appeared on Born Fabulous Podcast.