How My Mother Struggled to Let Go Because of My Disability

In 1996, I made my grand entrance into the world far sooner than anyone expected. I was born 15 weeks premature, when my mother was 25 weeks pregnant. When I was 7 weeks old, I had a bleed on my brain, which resulted in cerebral palsy. That is when my mother became more than just a regular mom. She became a “special needs mom,” the parent of a child with a disability.

The first time I noticed my mom was different to others, was when she was asked to stay at a friend’s birthday party, despite the fact that all the other parents had just dropped off their kids and left. I saw the looks exchanged, the sympathetic shakes of the head that were really “thank the lord it isn’t me.” After that, I stopped being invited to birthday parties. There was always an excuse. I remember my mother seething at my aunt, whose daughter is three months younger than I am, and repeating, “She’s just like everyone else!” so many times that the entire rest of the street could’ve repeated the phrase.

The second time, I was around 10 years old. We were shopping and walked past a stand where they were letting kids have a bungee cord experience with a trampoline. As we stood and watched, I begged her to let me try. So much so that one of the sales people came over and also begged her to let me try. My mom looked him in the eye and said, “She can’t. She has cerebral palsy” and his response to that was to become visibly choked up and reply, “Oh god. I’m so sorry. Tell her she’s beautiful.”

It wouldn’t, however, be the last.

As I got older, this was not something she was going to let go of easily. I hit my teenage years, and like the rest of my friends, I spent the vast majority of my time either in my room, or at the local park definitely not drinking the neat vodka that we’d all saved up for all week, and sharing the cigarettes that someone had taken from their mother. Looking at me, talking to me, I was just a regular English teenager. You would never know there was anything different about me. I was just like my friends. The one key difference between me and my friends though, was my mother. She wanted to know where I was constantly, and if she could not get hold of me after the first ring, she called each and every one of my friends, repeatedly, regardless of whether or not one of us answered.

When it came to going out, she became almost stalkerish in her qualities. I wasn’t allowed to leave the house on my own — for any reason. I wasn’t allowed to catch public transport by myself, or take driving lessons, or even leave the room without telling her where I was going. I wasn’t allowed a lock on my bedroom door and she didn’t have to knock. She had to know all of my friends and their parents, she had to have access to my phone, and my social media, and she went above and beyond to let me know that she saw me as completely incapable of  doing everything that my cousin, who is just three months older than me, was doing at the same time. By the time I hit 17, I was sick of being my mother’s daughter. I was having serious mental health issues, and her unrelenting suffocation in the name of protecting me did not help. I told her I did not want to go to the university that she wanted me to go to, and instead planned on moving away. She screamed at me that, “I wasn’t going to do that and still expect to live under her roof.” I looked her in the eye and told her to “watch me.” And three weeks later, armed with a backpack, my bank cards, and a fresh pack of cigarettes, I moved in with one of my friends, halfway down the country.

Turns out, my mother had become so used to being the “special needs mom” that she couldn’t let go. My independence terrified her. She still attempts to have control over my life to this day.

Almost 23 years on from my grand, unplanned, entrance into the world and I have managed to amass 12 GCSEs, 4 A Levels, a Bachelor’s degree and a Master’s degree, with the hopes of progressing further  and achieving my doctorate. My mother has come to terms — for the most part — with the fact that she cannot protect me forever, which is probably the hardest thing for a parent of a child with a disability to accept. However, we are still currently having an argument about me travelling alone to Australia in September. Her response is still, “you’re not doing it” and mine is still, “watch me.”

Being the disabled child of a parent who becomes wrapped up in that identity is not easy. But the reality of the situation is that they have spent so long looking out for us, that perhaps they really don’t know what to do when they don’t need to it anymore.

Share
or  Copy Link
Link copied to clipboard.
Be first
85 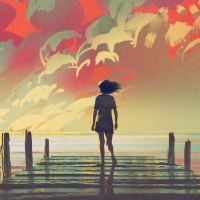