What You Should Know Before Calling Trump 'Mentally Ill'

I get it. Trump has come out this month with comments inciting even more stigma around an already marginalized community. Blaming mental illness for violence, lumping together the words “mental illness” and “hatred” as if they are one in the same and now calling for the involuntary confinement people with mental illnesses. It’s been a rough week for those of us in the mental illness community. And we don’t need to repeat all the statistics that there is no correlation between mental illness and gun violence, or that we are much more likely to be the victim of violence than the ones perpetuating it.

But to those of you who aren’t actually in the mental illness community, please educate yourself before “clapping back” at Trump by saying he has a mental illness. When you do so, you are part of the problem. You are perpetuating negative stigma and stereotypes associated with mentally ill individuals.

I know when we see people do bad things, it’s really hard to believe that someone in their “right mind” can do something bad. We want to find some explanation for how someone can act in a way that goes beyond anything we would ever do. But the answer is not to blame mental illness. There really are just bad people out there, and the more we equate badness with mental illness, the more we are stigmatizing those of us who are suffering from illnesses that are completely beyond our own control.

Share
or  Copy Link
Link copied to clipboard.
Be first
571 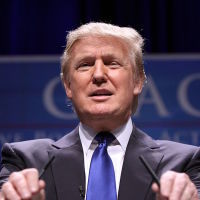