Camila Cabello Breaks Down Mid-Concert About Her Mental Health

Camila Cabello may be a world-famous pop singer, but like many other stars, she isn’t afraid to candidly talk about her mental health with fans. During a Wednesday night concert, the “Havana” singer gave an emotional reminder about why it’s important to talk about.

Cabello was in her hometown of Miami, Florida, for a performance that included many of her popular hits and new tracks from her upcoming album, “Romance.” Before launching into her song “Scar Tissue,” however, Cabello had a message for her assembled fans about her mental health journey.

“I have struggled so much in the last few years with anxiety and with, you know, I feel like this song, at this part of the show, is so important to me because I’ve had to remind myself lately, to be so kind to myself,” Cabello said, adding:

Cabello has opened up about struggling with her mental health in the past, including living with obsessive-compulsive disorder (OCD). She previously said she started noticing in 2015 she “would wake up with a super-accelerated heartbeat and really negative, intrusive, compulsive thoughts,” she told Latina. “I didn’t know what was happening.” She told Cosmopolitan U.K. after seeking help, she learned to better manage her OCD and mental health.

In line with learning her own need to “slow down and take care of yourself,” at Wednesday’s concert she outlined that while “loving yourself” is often considered a cliche, it’s also an important aspect of managing your mental health.

“Any time that I’ve struggled, I look around the room and I feel the human in all of us,” Cabello said, adding:

Whenever you guys reach out to me and say that you’re struggling, I feel so empathetic to that and I can feel that looking around here. I got emotional because I just wanted to remind you just like I have to remind myself … please be loving and kind to yourself. It’s not just a cliché, it’s not just a generic thing to say — the way that you talk with yourself in your head is so, so important that I just wanted to remind you in case you needed to hear it to be kind and be loving to yourself and talk to yourself the way you talk to your best friend. Don’t be mean to yourself because it only makes things worse.

Share
or  Copy Link
Link copied to clipboard.
Be first
308 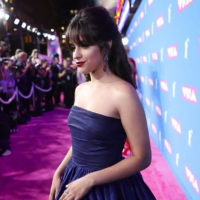