This Might Be a Better Name for Dissociative Identity Disorder

As people with dissociative identity disorder (DID), we’ve done a lot of musing on what it means to have it. We’ve also done a lot of growing, and we try to be as self-aware as possible. At the core of a lot of our introspection is the difference between personality and identity.

DID was formerly known as “multiple personality disorder.” I actually like this nomenclature. To ourselves, prior to and in the early stages of our diagnosis, we shared one identity. Let’s call that identity “Alex.” We all answered to that name, but we were all observably different. We displayed multiple personalities, we had interpersonality amnesia or partial amnesia, we had different stress responses, etcetera. The diagnostic criteria were met. A friend would ask us: “Is it science-Alex or art-Alex today?” Sometimes we felt far younger than we were, notably spent a day with a sippy cup watching children’s cartoons, and it was what we genuinely wanted to do. On some days, it was harder to remember vocabulary in a language we were sometimes fluent in. We failed a biology test one day that we would have passed with flying colors on another. Our handwriting annoyed us by changing and making our school notes inconsistent. Our artistic ability varied wildly.

In that period of our life, our condition meant confusion and difficulty functioning. We didn’t understand why we liked a person one day and hated them the next. We had a terrible time making life decisions. Once we learned to identify our different personality states — that is, once we developed identities for our different personality states, it was much easier to function. Art-Alex became Aelius; Science-Alex became Evander, and so on. By being able to say “Ah, this is who I am,” we gained the ability to predict our own strengths, weaknesses and reactions. The partitioning began to make sense.

We think of it like soup. In that soup are chunks of memory, likes, dislikes, fears, triggers, hobbies, etcetera. Particular combinations of chunks are a personality. Once that personality has a name, it’s an identity.

And true, we have embellished those identities. We have stories and worlds where we imagine what we would have been like if we’d had our own individual bodies. We have self-images that are so strong that we become startled when we look in a mirror — so strong that our proprioception, or feeling of where our body is, changes. I imagine it must be like “phantom limb syndrome.” Strange to feel like your face looks differently than what it does. In that way, I can see why some people with dissociative identity disorder might be convinced they’ve made it all up. I can see why some people believe it’s all an act. But those little embellishments are no different than what an ordinary person does when they pick and choose the way they think about themselves. “I am a teacher, I’m a tomboy, I’m an athlete, I’m a female, I’m a musician” – those things contribute to identity whether you have many or multiple personalities.

Our personalities, whether they formed through dissociation or through a failure to integrate into one coherent sense of self, have a right to identity, I believe. When we shared an identity, we suffered. We had trouble maintaining friendships, keeping track of whether we’d eaten, and maintaining our obligations. To an extent, we still share an identity outwardly. Strangers and loose acquaintances know us by only one name. Knowing our own names, though, and what our story is, helps us to coordinate ourselves, to hold down a job and to lead a healthier life. So, I believe that having multiple identities is not the core of the disorder – having multiple personalities is.

“Dissociative personality disorder” would more accurately encompass the root of a patient’s distress and symptoms, while taking focus away from the “identity” which is something that can be created or faked. You craft an identity for yourself; your personality is who you are. An identity is a shell or an image, and a personality is what fills it and gives it life.

To all of the skeptics, my identity is just as “made-up” as yours. Someone “made-up” your name, and you decide which words to use to describe yourself. If you wanted to, you could create an entirely new identity but still be the same person. Perhaps you had an identity as a party animal, but now you’re a businessman and don’t think of yourself as that wild guy from college. Multiple identities is not the problem.

Having a single identity for us was like 30 people trying to wear the same pair of shoes. The shoes were already worn in with the shape of someone’s foot. They were too big or too small, or in some cases fit pretty well. Every day was an identity crisis. What we pursued one day, we wanted to abandon the next and progress was nearly impossible. You may be thinking, “but everyone feels that way sometimes,” but this was chronic. Try picking a career or a spouse or where to go on the weekend when you have no idea what you might like in an hour, or don’t remember a conversation you had with an inspirational mentor. It’s still hard, but at least now we can make sense of our changing opinions and personalities and can work together to make decisions that will benefit all of us in the long run.

Let’s not make identity the villain. Let’s not dismiss the whole disorder as “made-up” because an identity is something created.

Photo by Omid Armin on Unsplash

Share
or  Copy Link
Link copied to clipboard.
Be first
64 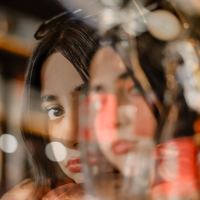