I want to talk about borderline personality disorder (BPD).

For me, BPD makes me feel like Alice in Wonderland (hence the poorly-photoshopped image). This is both delightfully fitting and also a bit contrived, so bear with me.

I am doing poorly at the moment, and my BPD is shining through clearly with black and white thinking, paranoia, rapid cycling moods, impulsive behaviors and more that I won’t go into.

BPD wonderland can be beautiful. It makes me full of empathy, love and care in platonic/family/romantic relationships, which feel colorful, vibrant and exciting. When feeling “high,” everything looks beautiful (although sensory overload is a real struggle). People and adventures are exciting, and my mind races from thought to thought. I’m gleeful at best, irritable at worst.

When I’m low, the BPD wonderland feels terrifying — an alien world which I can’t escape. It doesn’t quite feel real and it’s hard to tell where I am and why. Relationships become fraught, as I feel paranoid, angry, scared and jealous. The beautiful world isn’t beautiful enough to make me want to stay. All I want is to clamber back up the rabbit hole and back to the real world; back to “normality.”

And sometimes, like right now, BPD wonderland feels in the middle of the extremes. If anything, this feels scariest and most dangerous. Wonderland is beautiful and appealing, but too loud, too colorful, too angering, too irritating, too much. I feel desperate and scared; wired and exhausted. I feel paranoid that the strange creatures of wonderland are out to get me. I behave erratically and irrationally because this wonderland world just doesn’t make sense. I “split” — you’re either amazing or awful and nothing in between. I lose friends, embarrass myself and cause chaos because I’m too lost in this wonderland, and too far from the world that I understand.

The BPD wonderland is tricky to navigate at best — perilous and deadly at worst. I want to apologize for my behaviors when BPD wonderland is my operating world. It’s not an excuse and I am trying to learn and change, but it is at least an explanation for my current state. OCD and PTSD are also at play, but this current wonderland is BPD in all its glory.

Share
or  Copy Link
Link copied to clipboard.
Be first
227 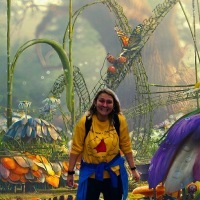