We had planned this trip for months.

My husband had a work event to schedule in Nashville, and he was able to have it overlap with my son’s birthday. Everything fell into place. At first, I was going to fly over with my son, and we would have a great family weekend. But then a board retreat was scheduled for that weekend, and we realized my son would have to fly by himself — or not go at all.

We convinced each other he could do it. We talked about the positives and negatives. And then we put it aside, a little too worried to process it all.

Suddenly, the trip was two weeks away. We looked at each other and took big breaths. He can do this, we said. Let’s figure out how to make it happen!

That has always been our mantra. He can. He will. Let’s figure out how he can do it. Let’s find tools and resources to make it work for him.

I got on bunches of Facebook groups and searched for airline info. I found good reviews and bad. I found positives and negatives. And then I found a post that spoke highly of Southwest Airlines, and how wonderful they were to work with, and how they had created a whole process to navigate their system just for families with children with disabilities. We picked Southwest Airlines!

We booked the flight, ensuring we booked a non-stop. We picked a midday option when fewer flights are delayed. We made lists of things he may need. We talked with him about where to sit and gave reminders on how to act. He has flown tons and tons of times. But never all by himself.

As I was driving to the airport that morning, I had to take some deep breaths. I realized suddenly that I would have to stay at the airport and make sure the plane did actually get off the ground. Then I thought perhaps I should stay there for longer, in case they turn around for some reason. What if they get halfway there and have to make an emergency landing? Will they come back here, or land somewhere else? What if they have engine trouble? What if someone has a medical emergency and they don’t make it to Nashville?

And then I remembered to breathe.

The agent was amazing. She gave me the day pass to go through security with him. I was babbling away to her, telling her this was his first time flying by himself. She calmly suggested we speak with the gate agent. I could even walk him down the jet way if needed. He could meet the flight attendants and know their names. She said they were all glad to help.

As we walked over to security, I took more deep breathes. I reached for my ID and got out my ticket. I looked at my son, ready to give instructions as we approached the security agent. He already had his ID and ticket in his hand, and calmly said, “Me first.”

I waited while he went forward first. He then started over to the inspection area and took off his shoes. I walked up and gave the agent my ID, and she was giggling. “You got you a strong independent boy right there!” she laughed.

And in that moment I realized — I do! I have given him the tools. I need to let him lead the way.

Suddenly it was boarding time. We stood up and I gave him a tight squeeze. We walked closer, and I reached over to give him a last kiss.

“Bye, Mom! I’ll send you lots of pictures!” he said. He walked up to the gate agent, who scanned his ticket and he started down the jetway, all by himself.

I took deep breaths. I wanted to go ask the gate agent to check on him. I wanted to ask him where my son was sitting. Was it by someone old or young? Was it someone nice or indifferent? Had he put all his things under the seat, out of the way?

I took deep breaths and walked over to the rocking chairs. I watched his plane take off and drove home.

He called as soon as his flight landed. He was sooooooo proud of himself. All the worry, all the stress, all the prepping was worth it!

Give him the tools, give him the resources and he can. He will. He did!

Share
or  Copy Link
Link copied to clipboard.
Be first
698 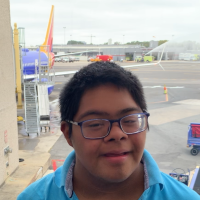