What My Path to Accepting My Bipolar Disorder Has Been Like

Acceptance has been an ongoing process for me. Not just overcoming denial or stigma, but owning my diagnosis of bipolar disorder and allowing others in to help me. I had been a high achiever, a perfectionist. Accepting I have a mental illness has involved accepting myself as “broken,” as imperfect, as fallible, as human.

Forgiving Myself for Not Being Perfect

Acceptance allowed me to forgive myself for not living up to early life expectations. I quit UCLA after my freshman year, taking a semester off. I then attended community college part-time before transferring to UC Berkeley. I never became a doctor or a lawyer. But I did get my bachelor’s, a master’s in psychology and much later even attended seminary twice after my hospitalization, but never finished my religious studies.

The fact I attended seminary twice after I had been hospitalized indicates my sense of calling never quite died. The psychologist I saw after my hospitalization asked me about my sense of calling. She had been raised in a convent by nuns, so she understood what I meant by sensing I had a calling, a higher purpose, that maybe I was supposed to go to seminary and preach. This feeling had been validated over the years. I had been told I had a gift for preaching.

At times, I was shocked I could persuade people in debates. I enjoyed the challenge of debating the “wrong” side of an issue and convincing people what I argued was true (even when it was clearly wrong). In junior high, I persuaded the class we had been visited by aliens. Whether or not we have been, our scientific evidence of such a visit is lacking. That I can convince people of falsehoods scares me.

Similarly, given my history of mental illness, I’ve questioned my sense of religious calling, and whether I was suited for ordination and pastoral ministry. Still, after my psychiatric hospitalization, which I discussed openly with my pastor, he recommended me for seminary. I attended part-time for a year. While at Fuller Seminary, I wrote a “Mental Health Ministry” manual. As I explored what my calling was, it became clear that I was called to a mental health ministry.

My studies went well until we moved to Eugene, Oregon. The move to a rainy, overcast climate amid pines that block the sun triggered a depressive episode during which I slept throughout the day, and had to set an alarm to pick my son up from school. I withdrew from seminary and focused on my mental health recovery.

We decided to move back to California – what my Eugene psychiatrist called the “geographic cure” – for my mental health. Later, when stable, I reapplied to seminary, this time to study theology for a career in academics, rather than my previous studies in divinity for ordination as a pastor. I did well academically and enjoyed studying Hebrew.

Then the recession hit, my husband lost his job and we had to move to the Mojave Desert for employment. When I decided to withdraw, Fuller Seminary reached out to me to offer financial assistance. I explained the issue wasn’t just financial – the stress of unemployment and moving made it untenable for me to continue my studies. I tried to continue my religious studies online, but found the process overwhelming.

Now, I don’t even go to church. My husband and I talk about attending local small congregations, but end up cocooning on Sundays. When I become involved in group activities, like attending church, I get overstimulated, overwhelmed and overextended. I tend to volunteer to do too much. I do better with solitude, praying alone or with my husband. Both my religious and mental health recovery journeys have led to acceptance. Acceptance is essentially a spiritual experience. Whatever your faith, whether you believe in a higher purpose, to accept yourself is to love yourself.

I am not weak. I am vulnerable. I am not perfect and flawless. I am loved, lovable and loving. My life has meaning. My life experience gives me purpose in helping others. I am grateful that I can write and speak to share my journey with others, hoping that it inspires others to accept themselves.

This story is an excerpt from Kitt O’Malley’s memoir, “Balancing Act – Writing Through a Bipolar Life.” 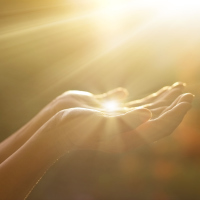