I still can’t remember the day of Jasper’s birth. It sits, shifty and shaky, in a corner of my mind that I hope will not be disturbed for a very long time. I don’t have the time now to unpack that day, or the days directly after. There’s no room for it. We don’t have the memory of a smiling face or a photo of a proud parent holding up a baby as they beam with joy at the delivered promise now held. Having heard gentle whispers of how the day affected and continues to affect members of our families, I am grateful for the obvious protective instinct my body is using to shield me from those memories.

Sometimes when I’m lying awake at night thinking about where we are now as a family and just how grateful I am that our son now lies a meter away from me in his own cot in our own home. I wish I could also bury the memories of the five months we spent in hospital. I can’t, of course, because five months is too long to lose out of the life of our beautiful daughter Darling, and we need everything learned in that time to take care of our son.

The primary lingering traumas are that of seeing his little body worked on by intensivists full of adrenalin (and love) after another operation, the all-consuming fear that comes with waking up in the middle of the night to a room full of specialists and nurses frantically keeping your child alive, and most of all the ‘not knowing’ that comes with having a child who has not yet been diagnosed. These are mental battle scars I am sure will never go away.

Jasper is rare. The rarest of the rare. In any other area of your life, this term denotes something much more palatable. In hospital you learn that there are degrees of rare. Rare can be great – a synonym for ‘fascinating’ or even ‘publishable’ which with it brings extra time and attention for your child. Rare can also mean ‘scary’ and ‘acutely life-limiting.’ Jasper began his hospital journey as the ‘light’ version of rare and then slowly devolved into the ‘dark’ rare the longer we stayed in intensive care.

His being that rare means nothing in the pyramid of sick kids. When friends apologize over their worry about their child’s cold, I remind them that our daughter still sleeps with us — and that prior to Jasper being born, my primary concern as her parent was that only vegetable she would eat was broccoli. Parents are parents and the parenting experience has to be contextualized. One kid’s cold is another kid’s coma. It’s all relative. 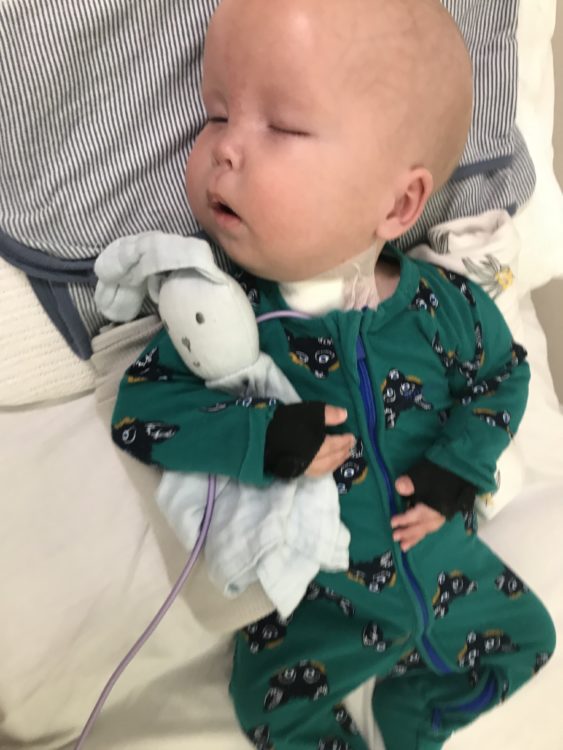 In the timeline of my internal horror movie that began a little over 10 months ago when Jasper stopped moving inside me, each step is punctuated with a new plug put in his body to correct the concern like pieces of the dam holding back the flood. Can’t breathe? Tracheostomy. Can’t find a vein? PICC line. Can’t swallow? Mic-Key feeding button. They gradually filled his tiny body with the supplementary supportive technology that continues to keep him alive. All the while, in the background, our geneticist Dr. Matt Edwards was hunting for a diagnosis. Without a diagnosis, there was no road map. Without a diagnosis, we thought he would die and had the sinking feeling that without a diagnosis, and the longer we stayed in intensive care, the doctors were inclined to agree with us on this point.

Before Jasper came crashing to earth like a beautiful, unexpected flash of light, my understanding of genetics was limited to this – my mother’s side of the family has enormous foreheads (benign macrocephaly we now know) while my father’s side of the family has good skin and strapping men. I know that my brothers and paternal cousins are lucky to have inherited my dad’s genes and I had hoped my son would also. I had wondered briefly what would happen should our son double down on the ‘big head’ genes with the paternal and maternal big heads colliding genetically, and what this would look like on a little baby. It was a fleeting thought and was probably met with a laugh at the time while I moved on to more important thoughts, like ‘I’m tired’ or ‘I want this salad to turn into a doughnut.’

Before Jasper, I was ignorant to the fabric of our being. Now I know enough to be in awe of us. I know that although Jasper is the only child recorded in the world with Costello syndrome and SCN1A, he lives within a community of rare children who are independently rare and cumulatively common. The most traumatic aspect of Jasper’s origin story is the time when we did not know – did not know he would be unwell when he arrived and did not know what his condition was. This was the time when holes were plugged to keep him alive instead of to help him thrive, as we jumped from crisis to crisis without a clue as to where we would eventually land and whether or not Jasper had a condition that meant he was not ‘compatible with life.’ 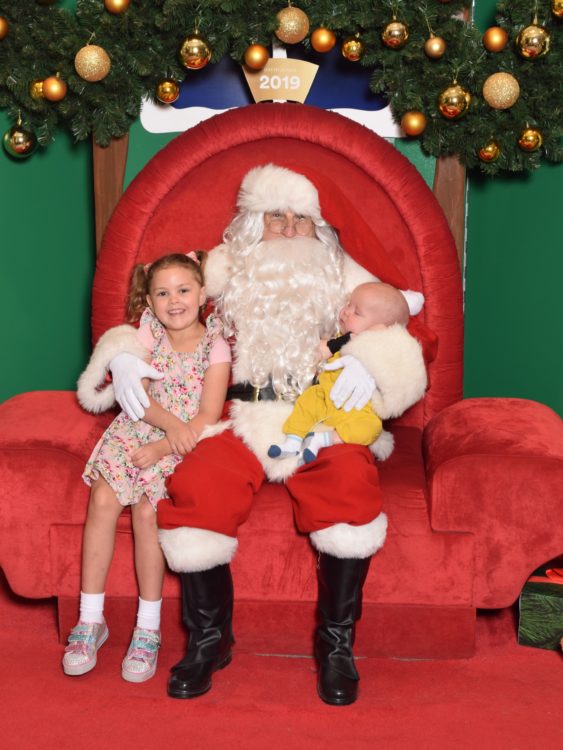 Jasper was fortunate in so many ways. We call him the ‘luckiest of unlucky babies.’ Which, while being a light and gentle way of summing up his journey, is terribly reductive in terms of the reality of why he is still alive. Jasper is alive because of two things – our public health care system and those who choose to work within it rather than bringing in the big bucks working in the private sector, and access to next-gen genetic testing. The John Hunter Pediatric Intensive Care unit kept him alive and we in turn kept the hope candle burning while Jasper’s geneticist found out where Jasper is rare and delivered the roadmap that comes with that diagnosis.

Dr. Matt Edwards, Jasper’s geneticist, is magnificent. He is a gentle, kind man who speaks softly and delivers terrible news with empathy. With a background in both pediatrics and genetics, international training in both and having also cared for one of only 17 children known with Costello syndrome in Australia, we had struck caregiver gold. For Jasper the road to diagnosis was not simple. Initial testing showed no signs of the more well-known syndromes and disorders. Further testing also came back blank. Access to the test that finally zeroed in on Jasper’s conditions has only recently been made available in Australia and, while brilliant, requires the input of clinical support from a geneticist or senior clinician to be effective.

The new, computerized exome test sequences every possible combination of my DNA, Jasper’s DNA and my husband’s DNA looking for possible errors in the gene. Known pathogens (recorded mistakes signaling a known syndrome or disorder) and pathogens of unknown significance (recorded mistakes/previously unrecorded mistakes that sit near known pathogens and are therefore likely to be the cause of the clinical presentation). The computer sequencing is just the first step. From there the geneticist or clinician has to cherry pick out of the thousands of possible conditions what they believe is likely with reference to the child’s clinical presentation (i.e. how they look). This part of the gene is then extracted and tested for the specific condition. So if your geneticist or clinician is clueless, you are potentially staring down the line at no diagnosis or one that is stumbled upon. It’s worth mentioning at this point that every time you cherry pick a condition to test, it costs around a thousand AUD.

Without clear clinical direction from his geneticist, Jasper’s condition may still be lost deep down in the hundreds of thousands of strands of DNA that are mined for spelling mistakes in the revolutionary exome sequencing test. Without Dr. Edwards and his hours of research, study and passion for our son’s future, Jasper may still be in hospital being plugged by medical professionals — slowly losing hope that he would make it out alive.

What is a parent, child, or hospital to do then if they simply do not have access to a big ole’ brain like that of Dr. Edwards? Or if they are in country where they do not have access to expensive tests like the genome and exome sequencing? Or that their health insurance does not afford them the one thousand plus dollars AU it can cost every time you cherry pick a syndrome or disorder?

Before Google, they would go to the library and hope. After Google, they would google and hope. Now, with help from Dr. Tracy Dudding (a geneticist) who herself is the mother to a daughter with a rare disorder, some of her colleagues and an Australian tech startup, the world is being opened up for kids who have previously been undiagnosed.

Facematch.org.au is a humanitarian project that uses facial recognition software to give indicative clinical diagnoses to kids with syndromes and disorders that present with intellectual disability as one of the clinical symptoms. They have opened the software up, free, to the world. Everyone with a mobile phone can take pictures of their child, load them up and become part of the project.  If the child is already diagnosed and they are hoping to help other children be diagnosed, they add the genetic mutation and their doctor’s email so the doctor can put the specifics in. If their child is undiagnosed, they will then add their doctor’s email, and if their child is matched with others on the database, their doctor will receive a paper with a clinical percentage match to the relevant syndrome or disorder.

Most conditions have a set of standard facial features that are often seen as signs of the condition in the child. The website uses facial recognition software, donated by Aussie tech startup Imagus, to match kids with other kids showing the same clinical signs. The same is done with the kids’ hands and feet as there are often signs of conditions in these areas as well.

This is revolutionary. This means that the brightest minds on the planet who are completely inaccessible to most of us and who have diagnosed these conditions in those fortunate enough to have access, like my son Jasper, can now help those who cannot get access just by taking a few minutes to upload a few pictures on their mobile and linking in their doctor. It should come as no surprise then that I learned of this project through Dr. Edwards, who felt that his work on diagnosing Jasper may be able to help another child one day. Such is his way.

It took me a little over two minutes to load Jasper into the system. I imagine that somewhere another mother is gritting her teeth in the face of mounting horrors as her child goes through the throes of an undiagnosed condition and watches, powerless, as the faces of those treating her child become more and more grim.

Then I imagine that a doctor, fellow intensive care parent or mysterious and helpful stranger says, ‘Hey, have you heard of Facematch?’ Then I imagine them loading their child up, and a week later, their doctor gets a paper with a picture of my gorgeous, gummy-grinned little Jasper peering up at him like a road sign that is going to help them get on the right track to getting out of hospital.

I imagine it, and I let out a big sigh of relief that we can pay the ‘luck’ of Jasper forward.