When My Son With Down Syndrome Got Sick During the Holidays

While friends and family prepare their homes for the arrival of Santa Claus, we battle one virus after another. Croup has already hit our home this year, going from one boy to the next. It took a lot out of us, physically draining the boys and consuming us with worry. As a result, I was really hoping we wouldn’t have to worry about much more than a common cold for the rest of the season.

Unfortunately, I was wrong.

Last Thursday, my son Robert didn’t seem quite himself. With his violin concert debut scheduled for Saturday morning, we decided to keep him home from school on Friday. We thought all he needed was a day of rest. When my other son Sullivan woke up on Friday, we could tell he wasn’t quite himself either. Well, we thought, we may as well keep him home from daycare to give him a little more rest as well.

Neither of them had much energy on Friday. Sullivan perked up in the afternoon, but for the most part he was a grumpy bear. Fast forward to Friday night. If it wasn’t one kid waking up, it was another. I barely slept 45 minutes between each wake up, and it was a rough night. Somewhere, in the middle of all this, I canceled Robert’s violin debut. It broke my heart to press send on that message to his teacher. It was one thing to back out of a breakfast date with some friends and Santa, but it was another to miss what we’ve been working towards. I know it was the right call, but it still sucked. On Saturday my husband had to work, so I took advantage of his mid-day start and I took a nap while the baby napped. I am so grateful I had the presence of mind to do that, not only for my mental well-being, but it allowed me to think more clearly that afternoon.

I was changing Robert just after lunch and noticed he had developed a rash all over his torso. My parents encouraged me to bring him to the emergency room to be checked. I dropped the littles off with them and headed in. We were quickly triaged and placed in isolation.

A nurse came in, and realizing I was communicating with Robert in French, drew on her memory of French Immersion classes to talk Robert through what she was doing as she checked him. She apologized for her imperfect French, but she needn’t have. The effort alone was priceless and helped to make him feel comfortable, and on top of that, her French was beautiful! (If you’re reading this: Merci!)

The resident doctor came in shortly after the nurse left. He did a very thorough exam of Robert. He asked me questions such as “When did the symptoms begin?” and “What medications is he on?”, until finally he looked at me and said “Does he have any congenital problems?” I told him that Robert was born with a congenital heart defect, but that it had naturally repaired itself. He looked at Robert, looked back at me, then said “Does he have Down syndrome?”

It had never occurred to me to tell him.

Not once that visit had I told any of the staff members that he had Down syndrome. And this resident was unsure, not wanting to make any incorrect assumptions. I was so unprepared for the question, forgetting that not everyone knows, and realizing in that moment that it isn’t blatantly obvious.

The resident left and came back shortly after with the doctor. She examined Robert for possible ear infections (he is not prone to them), checked his throat, examined the rash that had spread on his torso, down to his arms and even in his armpits. “I am going to swab his throat, but I am almost certain he has strep throat and scarlet fever.”

Do you know much about scarlet fever? Because I didn’t. I just assumed it was something of the past, something I read about in Jane Austen novels. It’s not. It’s here, and my poor boy had it. It was scary to hear, but she assured me that a simple round of antibiotics would clear it all up.

So here we are on day four of a 10-day course of antibiotics and the change in Robert has been outstanding. He went from complete loss of appetite to his normal, healthy requests, and from lethargic on the couch to begging us to “jouer hockey avec moi, maman” morning, noon and night.

Here’s hoping he stays healthy into the Christmas holidays, and that the colds his brothers have don’t develop into something more. After all, ’tis the season!

Share
or  Copy Link
Link copied to clipboard.
Be first
476 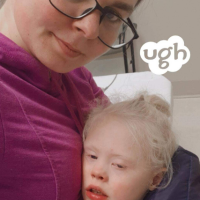