Finding 'Sisu' in Life After a Spinal Cord Injury

As the holidays approached, I started thinking about what gift I wanted to get for my husband, Jeff. We don’t usually make a big deal about gifts, but we always give one another our gifts early. We don’t plan it like that; it’s just kind of happened that way for the last 18 years.

Since Jeff’s injury, I’ve focused on getting him items that help keep him warm. He is a high level quadriplegic, and quads are notoriously cold — it has to do with his body not being able to regulate temperature. He’s already got every kind of beanie imaginable, and a couple years ago I got a him an epic scarf with a pooping moose on it. I wasn’t sure how I was going to top that.

So I thought I’d go a different route this year.

I was searching Etsy one night for something that might be a good fit. Jeff’s isn’t overly sentimental — not by a long shot. So I try not to get him anything too overtly sappy. I thought maybe I’d search for something that symbolized how he’s persevered through the last six years of his SCI journey. I searched for words like “determination” and “persistence” to see what came up.

And something caught my eye.

It was a print of a Finnish word along with the definition. I’d never seen this word before as evidently there isn’t a direct translation in English.

Sisu: [see-soo] noun: a special strength and persistent resolve to continue and overcome in the moment of adversity; an almost magical quality … a combination of stamina, perseverance, courage, and determination held in reserve for hard times.

It was sold in a set with a necklace that had the word printed on it, and the necklace came with a card with a further definition of the word:

Sisu is a Finnish word describing a reserve of power which enables extraordinary action to overcome mentally or physically challenging situations. 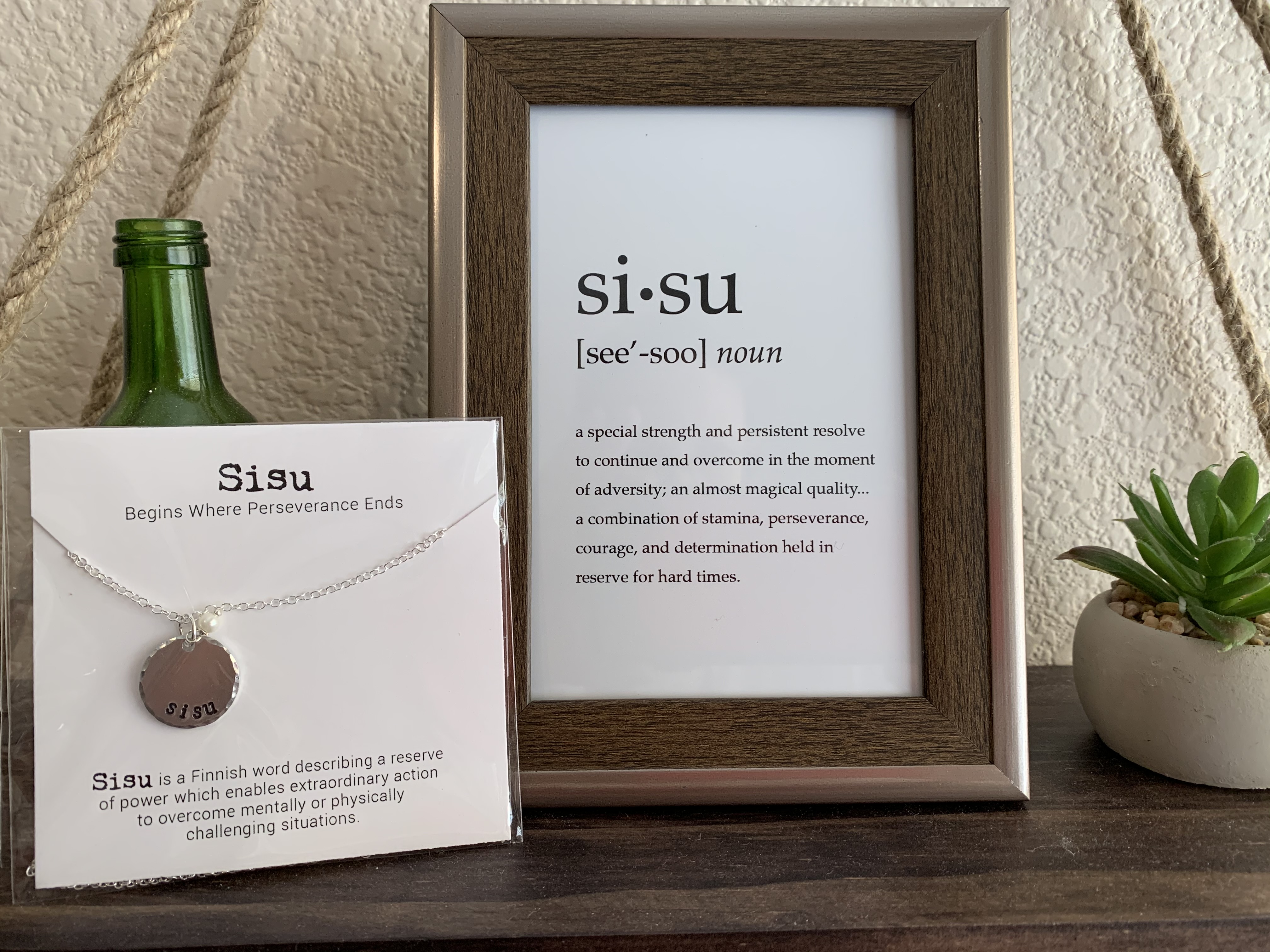 I bought the set — the print for him and the necklace for me. (I figured throughout the six years we’ve endured this life, I’ve exhibited my own sense of sisu at times as well. But this post isn’t about my sisu. It’s about Jeff’s.)

The set arrived in the mail, and I quickly framed the print and wrapped both items up together and placed them under the tree. Our daughter Evie saw the package right away (the kid has radar on new packages as they materialize under the tree). She asked me what it was, but I only told her it was a special gift for both me and dad, and that she would find out soon.

About a week ago, I was helping Jeff in the bedroom. He was in bed and wasn’t feeling great. His stomach issues he thought he had under control were flaring back up. He was uncomfortable. And to escalate the situation, he was just having one of those off days. They happen sometimes. Where the heaviness of life weighs you down. When you feel like no one understands anything of what you experience every day, every minute, every second. Where sometimes it’s all just too much.

I got him settled and I told him I would be right back. I ran out to the living room and grabbed his present from beneath the tree. Evie saw me and knew what I was doing. She asked if she could come in while he opened it. When I turned around, she could see the emotion on my face.

“Not just yet, sweetie,” I told her. “Daddy and I are going to open it together, then you can come in and see it.” She nodded her understanding and gave me a quick hug.

I went back into the bedroom and held up the wrapped package in front of Jeff.

“I thought now would be a good time to give you this,” I told him. We both smiled. We’ve never actually made it to Christmas without giving one another our gifts, and this year was no different.

As I unwrapped the gift, I explained that it was a little different from gifts past. I was trying to ready him for what I knew was going to be a gift that held emotional weight.

I crumpled up the wrapping paper and held up the framed print for him to see. I explained it was a Finnish word that had special meaning. And when I came across it, I immediately thought of him.

Then I read the meaning. Usually I can keep my composure with this kind of stuff, but my voice cracked as I read, and soon the words all melted together through my tears. Because as I read him the definition, I thought of all the times I’d seen Jeff exhibit sisu. All the times he’d pulled up a “special strength,” “perseverance,” and “courage” as he faced the most massive challenge of his life — one filled with an unimaginable amount of heartbreak, frustration and loss.

I remember watching him mouth his first words to me after he was stable in the ICU when he asked if he would ever be able to hold our daughter again. And I witnessed his quiet resolve when he would have to come to terms with that answer being no.

I remember seeing his terror and disappointment the first time he saw a power wheelchair after his injury when he told me he didn’t want to learn how to drive that thing. And I’ve watched as he’s learned to expertly maneuver a power wheelchair, driving it with his chin. I’ve seen his confidence emerge when he navigates it in tight spaces, and his happiness return when he cranks it up to the highest speed and coasts down the street.

I’ve witnessed a transformation in him from not wanting to engage with any type of adaptive product to using technology to actively engage his friends on his phone, all while holding a 13-inch stick in his mouth which he uses with precision to peck at the keys. And I’ve seen him go from a man who was convinced he would never again be an adequate father to a man who has figured out new and inventive ways to interact with his daughter again.

I know people love a good story about where a person with a disability eventually “overcomes” that disability — whether it’s through actual healing and recovery or whether it’s by giving that disability the proverbial middle finger and doing something sensational like climbing a mountain. All that is well and good if you’ve got the means and the physical function to make it happen.

But life isn’t always about overcoming. Ours isn’t anyway. It’s been more about shouldering Jeff’s disability and trudging forward with it on our backs while we navigate everyday life. That’s at least what we’ve tried to do. That’s most definitely what Jeff has done. It’s something he continues to do every minute of every day, and it’s a pretty incredible thing to witness.

I set down the print, wiped Jeff’s eyes and buried my face in his neck. I told him that I was proud of him. I told him he’s a great father, an incredible husband and always makes us feel loved. And I told him that as close as I am to his disability, I truly don’t know what it’s like to live like he does.

Even though I take care of him, ultimately I’m just like everyone else on the outside. I can’t comprehend what it’s like to not be able to move your body or your limbs. Not be able to feel when other people touch you. Not be able to reach out and hug someone you love. But even though I don’t know what all that is like, I’m pretty sure it takes an incredible amount of resolve to face life after a life-altering injury like his. I know that some days, some really hard days, Evie and I are the only two things in this world keeping him going. That’s what makes us a team. And we’re grateful he chooses to push forward with us.

After a few minutes, I opened the bedroom door and Evie came in. I was cleaning up a few things in the bathroom, and Evie went up to Jeff and asked what the present was. He directed her to our dresser where I’d put the print right next to our little cactus family I’d crocheted. He told her I framed a word that reminded me of him. She read it out loud quietly. Then she got out the step stool, set it up next to Jeff’s bed, and wrapped her arm around his chest. She always gives extra long hugs when she knows emotions are running high. I was able to snap a photo of this special moment.

After she left the room, I stood by Jeff and wiped his eyes once more. He looked up at me, a mix of emotions on his face. “Do you know what most people don’t understand?” he asked. “If I closed my eyes just now when Evie was hugging me, I wouldn’t even know she was there. Nobody understands what it’s like to not be able to feel your daughter hug you.”

The heaviness of the moment lingered, but only for a second. Because then he blinked away his tears, adjusted his head, and said, “But I love it anyway.”

And if that isn’t an example of sisu, I don’t know what is. 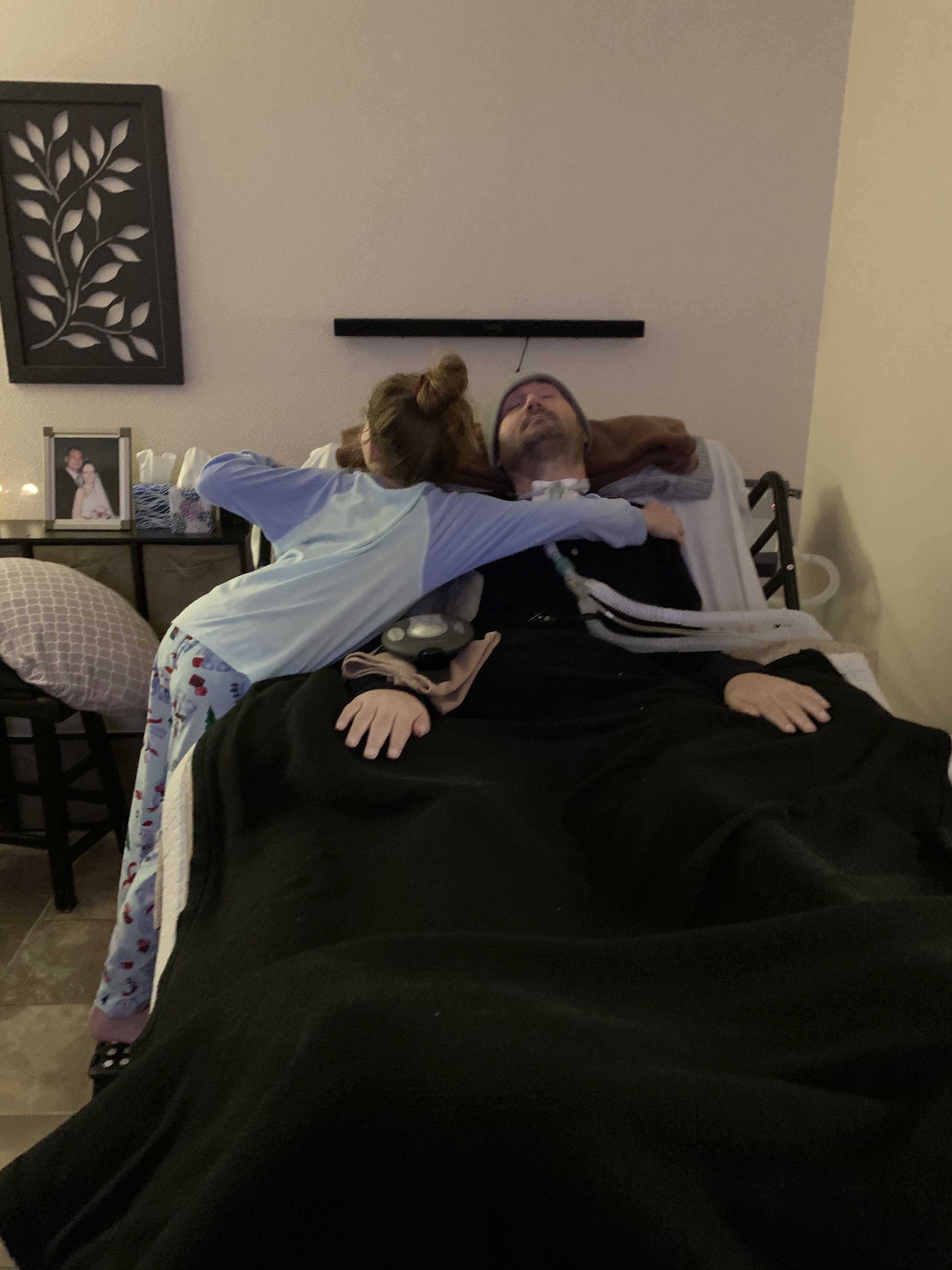 Share
or  Copy Link
Link copied to clipboard.
Be first
161