Two varieties of the popular pain medication Excedrin have been temporarily discontinued by the manufacturer as a precautionary measure, a decision that will impact some people with migraine and/or chronic pain.

Drug company GlaxoSmithKline announced Wednesday it temporarily pulled Excedrin Extra Strength and Excedrin Migraine from distribution due to “inconsistencies in how [they] transfer and weigh ingredients,” according to CNN. Though no safety issues have been reported as a result of the issues the company discovered, they temporarily halted production and distribution of the drugs while correcting the issues.

It’s not the first time Excedrin has been pulled from shelves. A 2012 recall also took the medication temporarily out of circulation after the U.S. Food and Drug Administration discovered there was a risk some of the medication was contaminated with opioids.

Migraine is difficult to treat effectively, and often, people use a combination of prescription and over-the-counter medications to manage their symptoms. The discontinuation of Excedrin Migraine, even temporarily, is a major blow for those who rely on it for the debilitating condition.

I’m gonna be fucked if excedrin don’t get Its shit together soon LMAO I think I’m running out of the migraine medicine!!!

Not the first time with this. But can y’all hurry it up?? Prescription meds don’t even work for my migraines and it’s been over 20 yrs. excedrin is the ONLY thing that works for me.

According to GlaxoSmithKline, the discontinuation of Excedrin Extra Strength and Excedrin Migraine will be short-term and encouraged those who rely on the medications to consult with their pharmacist or doctor for other options in the meantime.

“We are working hard to resolve the issue as quickly as possible, but at this point in time cannot confirm a definite date as to when supply will resume,” the company told CNN. “Other Excedrin products are available along with other pain-relieving drugs, but dosages may differ. Consumers should consult their pharmacist for the most suitable alternative product.”

Share
or  Copy Link
Link copied to clipboard.
Be first
343 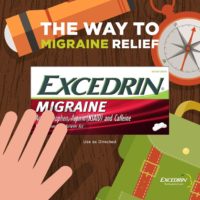