How This Rare Pregnancy Disorder Triggered My Antenatal Depression

I went into my second pregnancy with the excitement and anticipation of adding to our young family. Though it wasn’t planned, I felt ready to handle a second child.

I very quickly found myself deep in morning sickness. At the six-week mark, I traveled with sick bags and already had smells I had to avoid at all costs. By 10 weeks, I had grown accustomed to the limitations in my diet and the specific times of day I could predictably expect to be out of commission.

My midwife remained hopeful it would let up by the second trimester. I held onto my calendar tightly, crossing off the days, waiting for the relief she expected to arrive soon.

As I crossed days off, then weeks, I only got sicker. During the middle of my second trimester, I spent more time curled up on my bathroom floor than anywhere else in my house. I couldn’t even think of going out anymore. Then, I was diagnosed with hyperemesis gravidarum (HG).

My husband could no longer cook, make coffee or keep a garbage can inside the house. Every single smell seemed to restrict my ability to participate in life. I was weak and exhausted from vomiting dozens of times a day.

As a result of long stretches of the isolation that came from trying to manage my symptoms, my mood had become increasingly affected. My time curled up on the bathroom floor begging for the nausea and vomiting to stop, I had never felt so alone.

My world had become confined to a cold tile floor and the desperate hope that each week of this would be the last. I had antepartum depression, also known as antenatal depression.

You can research hyperemesis. Your doctor can offer you medication (which did nothing in my case). But no one prepares you for the impact on your mental health that this condition brings. How deep the isolation cuts into your life. How people seem to forget you exist. The offers to come visit dwindle and the judgment from other women’s projection of their own pregnancy experience is real. “Is it really that bad?” I heard more than once. It was.

I fought dark thoughts of resentment toward a child who hadn’t even been born yet. Then, the guilt from thinking that at all swirled in to tug at me back and forth.

I focused on my light at the end of the tunnel. I checked off the days, eagerly waiting for labor and this to be over. When I finally went into labor, I found it to be the easiest part of the whole pregnancy — a silver lining I wasn’t expecting.

After I came home, holding my baby in my arms, I had a tangible representation of this experience. The struggle I had endured to bring him into this world felt less and less important. The heavy cloud of depression began to lift, hormones readjusted and my physical health was regained.

As I settled into life again, I realized that while my world had stopped for nine months, the rest of the world had continued on without me. I felt out of place. I didn’t expect to have to assimilate back into my own life, but I did.

There was this awkward phase of reacquainting myself with the details of daily life I had put on pause. But with support from my husband and family, I found my way back.

I wish education on these subjects had been included in my pregnancy care. The knowledge that what I was going through was a condition and not my own “weakness” in handling the symptoms would have gone so far on how drastically it impacted not only my mental health, but also how long I suffered in silence withholding care from myself because I didn’t realize I needed it.

Ten years later, now, I still wonder what could have been different if I had known. Being able to name it and have the space to speak about what I was going through then could have been an asset.

As our society moves toward the continued openness and acceptance of mental health, antepartum depression should be given the space to have a voice, too. Education and acknowledgment to anyone who may find themselves facing this mental illness should be an open and ongoing discussion in obstetric care.

Share
or  Copy Link
Link copied to clipboard.
Be first
464 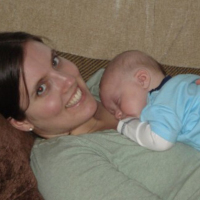