Meet My Uterus, Jane: My Journey With Endometriosis

I would like to introduce you to Jane. Jane is an affectionate name I have for my uterus. As Jane is part of my body, I love her, but she also causes me an immense amount of pain, challenges and difficulties at times. She’s strong, and so am I, and we tackle this journey together.

I was diagnosed and have lived with ovarian cysts since my late teens. Cysts come and then they go; sometimes they grow to the size of a golf ball and then they rupture. This can be painful. After many years of this cycle, I am quite aware of the process of pelvic ultrasound and trans vaginal ultrasound procedures, and the inside working and symptoms arising from my uterus. I have had confirmed ruptures, and you just start to know the feeling of bigger cysts coming and going, and learn how to cope with the body changing though these phases.

Then, Jane changed. After I gave birth to my third daughter 5 years ago, I quickly noticed my body was not the same (which is “normal,” since you have just grown and have given  life to another human), but I mean my uterus was not the same, not functioning the same. Jane was not the same. 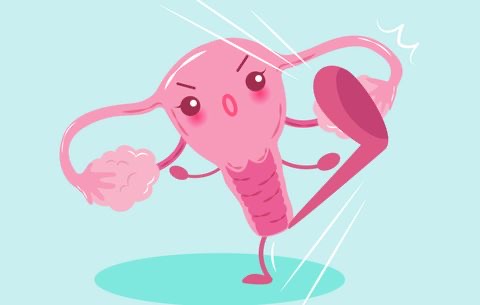 What I mean by this is my three to four days semi light “normal” periods went to five to seven days, and two to three days where life was unbearable. I swear you would think I was hemorrhaging, that the scene of me standing in the shower during this time you would think I had just murdered someone brutally. I couldn’t leave the washroom for extended periods of time (pardon the pun). I had to bring a change of clothes to work. I feared leaving the house for extended periods of time. I felt sick and most often like I would pass out at any given moment. My energy drained more than normal for a good two weeks, the pain was becoming debilitating. Heating pads and anti-inflammatory medications were a temporary help, but nowhere near a resolution. I was not satisfied that this was just my new normal.

I tracked my symptoms for years, consulted my doctor and shared my concerns every time I saw him. The birth control pill seemed the best option to control this, but I get severe migraines so I wasn’t OK with taking the pill anymore. How do you choose which of your conditions to take care of? I continued to suffer and dreaded each month as this time approached.

I noticed a pattern. My pain was so much worse during ovulation. My stomach bloated sometimes so bad I looked 6 months pregnant. I asked my family doctor if we could schedule an ultrasound during this time in my cycle just to see if “Jane” was acting visibly different during this time. My doctor agreed and I went in the following month.

It wasn’t long after my ultrasound appointment I received a phone call from my doctor himself, which was a surprise. He wanted to tell me that they had found an endometrioma on my left ovary.  His voice sounded caring and almost like he was giving me some pretty bad news. But he did explain he was not an expert in this area and he was going to refer me to a gynecologist. I appreciated the call from him, and the referral — maybe there was some hope for me now?

I had never heard of this before, so obviously straight to Google to find more about what Jane had cooking up inside of me. As my doctor advised, an endometrioma is found in a woman with endometriosis. I had heard of endometriosis before, but I did not know what it was or what it did. I started reading and learning and educating myself while I waited for my appointment. Things were starting to make sense to me now — complete sense.

I met my gynecologist, and for the first time I felt acknowledged: my pain, my bleeding, my suffering, was not something that is just “OK” or “normal.” She told me I shouldn’t have to live this way and endure these struggles; that was a blissful moment to just be acknowledged for all I had been going through finally. Someone finally understood. Now, endometriosis cannot be diagnosed without a laparoscopy and testing of the tissue, but an endometrioma found and all of my symptoms are enough to treat me for “Endo.”

Tricky part was going to be sifting through my other illnesses and medications to find a treatment plan that works for me. This would be trial and error. I had a biopsy which came back normal, and we decided together that the next step was to try an IUD. I was terrified of having something in my body that I couldn’t just remove at whim — what if I thought it was causing more harm than help? I wasn’t thrilled about again adding more hormones to my body, but this is hormone therapy. My doctor reassured me that if I wanted it removed she would get me in for an appointment quickly and take it out.

I filled the prescription and came back to have it positioned. Everything went well. I initially had some light pain and cramping, but it was just fine.

It took some time, but the changes and the results have been amazing for me. After three months, I saw a drastic decrease in my horrid period  symptoms. In six months, the pain decreased and my periods started to dwindle. I know this is no cure, but it has relieved  many symptoms, and reduced my pain.

Now, 10 months later, I almost have no period at all. It has been a life changer for me. I don’t find the IUD is interacting with my other illnesses or medication. Yes, I still have pain and cysts growing all the time, but it is much more manageable than in the past. I am thankful that the treatment so far is helping and Jane is having more good times than bad these days. Jane and I can now be in harmony more often than not.

Never give up, listen to your body, know it, learn it and then keep asking for help until someone listens.