The Japanese have an art form or maybe a philosophy called kintsugi, which involves embracing the flawed or imperfect. Cracks or breaks in a pottery or ceramic vessel are repaired using gold dust and resin.

According to Wikipedia, “Japanese aesthetics values marks of wear by the use of an object. This can be seen as a rationale for keeping an object around even after it has broken and as a justification of kintsugi itself, highlighting the cracks and repairs as simply an event in the life of an object rather than allowing its service to end at the time of its damage or breakage.”

On December 29, I posted an essay titled “Broken.” In it, I described the despair and depression that finally hit me after a stressful year, one that ended with the news my second book was not going to be published. It was an awful trigger for me, considering the amount of work and hope and myself I had already invested in the book, and how near it was to completion.

Instead, I have decided to embrace the philosophy of kintsugi. I may have been broken, but nothing says I can’t put myself back together and consider my mending an improvement. In fact, my therapist said something similar after I had an earlier breakdown: essentially, I could choose what parts of myself I would restore and which I could cast aside. Recently, I came across an old diary from that time. I have not yet decided whether to read it, keep it unread or get rid of it. At any rate, I don’t think I’m strong enough to decide that now, given everything else that’s been going on. But there are other things I have decided to keep.

One of my decisions is to keep my first book, “Bipolar Me,” alive. It went out of print this month, but I will be self-publishing it on Amazon. I won’t let the second book, “Bipolar Us,” die either. Right now, I am exploring ways to make sure it will be published as a paperback as well as an e-book. It’s better than my first book, I think, and I want it to be available to people that might find help or hope in it.

To celebrate this decision, I have ordered a kintsugi-style bowl. (I can’t afford the real thing.) On the bottom will be written, “My Story Isn’t Over,” which is also the motto that informs my semicolon tattoo. I will keep it near my desk, where I can see it often and let it remind me beauty can come from the broken after all.

I also hope the rebuild on our house, which was destroyed by a tornado, will make it more beautiful at the broken places. (The only thing that remained was the basement, so it’s really going to be all new.) At last, I will have a home I have had a hand in designing, choosing materials and decorating. No more mismatched, hand-me-down furniture. No more rental-neutral walls and carpet. I can create my study as a place of comfort as well as work, one where my self-care items are readily available and the colors and decorations reflect a calm, steady mood. Again, it is a chance to rebuild something and make it better.

Most of all, though, I need to keep working on me. There are still cracks and breaks in my psyche that need to be repaired. It will take continued hard work and loving support rather than gold dust and resin, but I hope I can eventually convert my troubled life into a work of reclaimed art.

Share
or  Copy Link
Link copied to clipboard.
Be first
434 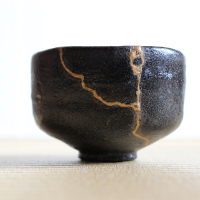