What I've Learned From Being a Peer Support Leader

I was a 12-step group leader a little less than year into it. I became the recorder for my local public group. I did that for well over two years before I became the organizer for the group. Along the way, I made a lot of bad mistakes and learned a lot of lessons. These are the important lessons I learned in being a peer support leader.

After I became organizer, we had a new lady who came. She was a bit brash and obtuse. She had just gotten out of the hospital, as most our new members had. It was her first time, and that tends to be a difficult experience. You might get good care and it might a nice staff, but losing your freedom to the point you’re being watched constantly is rarely a good experience. She was upset about meds. And of course, she was upset with her problems that took her there.

As mentioned, one of the things she was particularly upset about was medication. Many people don’t like to have to start taking meds. There are lots of arguments good, bad or otherwise. She asked another person what meds they were taking, which really put somebody on the spot and was very much against the group’s etiquette. So, we kind of helped calm her and the other person down and got through.

Before the next group, when she came in, I mentioned to her not to do this. She left right then. We never saw her again. Some people right, wrong or otherwise, no matter how polite you are, will do exactly the same thing if you criticize them before they have made some progress.

The solution I’ve found to this is to not call them out directly. Make one of the topics for the next group or maybe even the group after what you want to convey to them. That way, you’re teaching everybody and not just that one person.

This is a prime example of how to address problems in group without calling somebody out. I’m going to talk about getting new people in general, and the issues most of us faced when we were new.

When somebody new comes in, of course they’re probably not going to know the etiquette and proper manners. Very rarely are they going to know correct language. They may still be using ableist terms. They probably don’t know any better than what the other people have told them.

When you first joined peer support, did you know any better?

So, to be able to teach them all our etiquette and manners, we have to give them a chance to screw up. Otherwise, they never get a chance to learn and they just get thrown out. Usually, it takes more than one chance. Usually, a good number more. So, as long as they’re not hurting people, we need to continue to let them have a chance to come around.

Nobody knows what to expect when they first join peer support. Some don’t even know if they can get better. They’re just going along with it all until they find that one magical thing.

Many of us had that one thing in peer support we saw or heard that gave us hope. The one thing that showed us we can do this. We can recover.

It can take a little while for people to see that that one magical thing. It took me about three and a half months, or approximately 15 meetings.

Some people see it the first time they’re there. Some people don’t see it for a good while. As long as they’re not hurting people, we have to give them the chance to continue to see it, even if they’re not working at it right now. Everybody deserves the chance to recover.

In the group, we gave out homework every week, usually journaling prompts. Again, you don’t want to single anybody out. One way we got more people to do their homework was to give everybody the same homework.

According to the program’s books, we had a special activation project. To have one group member do something extra for the month. A lot of times, we lost members if we tried that, except for long-time veterans. And even then, most of the time, they didn’t do it. Including myself about half the time.

Although, if you do have something for somebody in particular, it should be presented by a very good friend or a sponsor-type person. It shouldn’t be pressured. If they don’t want to do it, they’re not going to do it. No point in taking a chance on them leaving.

When new people come to peer support, the most important thing to them is often to find other people who have been through the same things they have. They want to know they’re not alone.

And, of course, the thing most everybody wants is inclusion and friendship. There is nothing more important, in my opinion.

I hope these things can help you have a better, more effective peer support group or organization. May more people join your group.

Share
or  Copy Link
Link copied to clipboard.
Be first
7 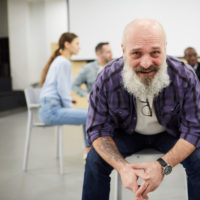