All Ryan Hines wanted to do was eat his midnight snack without a struggle. Hines has arthrogryposis – a condition which causes underdeveloped arm and leg muscles, incorrectly formed joints and a limited range of motion.

That night, as he fought to get his cereal out of the cup, an idea popped into his head. What if he could put a spoon on the top of an elevated device near his mouth? A device that could swivel around, allowing Hines to easily take a bite of his food and then turn around to pick up the spoon for another bite.

With this idea in mind, Hines used his background in drafting and design to create a prototype that would then become Bear Paw – an affordable self-feeding device for people with disabilities.

“The Bear Paw self-feeder is important to the very small portion of the community who can’t use their hands well enough to feed themselves and the caregivers who feed them,” Hines told The Mighty. “To me, having to be at the mercy of another, being reliant, almost feels being lesser – regardless if the person you rely on is a loving family member or spouse. There is something almost deprecating about not having independence.” 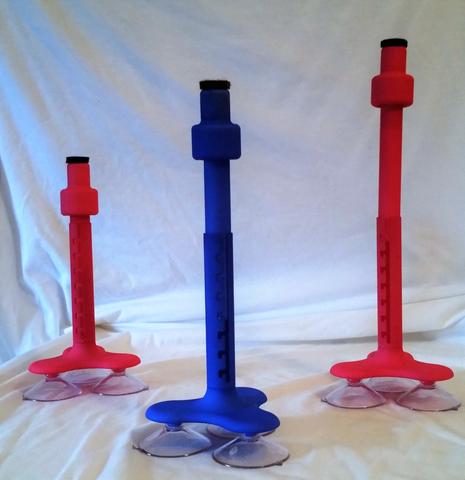 Bear Paw has a simple base with suction cups that ensure the device stays put on the table. It uses two magnets – one so it can swivel and the other to hold a spoon or fork in place. “It is designed for the user to grasp a utensil in their mouth at the handle, scoop food from a regular dish, place the utensil on the device, swivel it around, and take a bite,” Hines explained.

According to Hines, Bear Paw is the most affordable and simple self-feeding device on the market. Bear Paw retails for $150 and is designed with an adjustable shaft so the device can grow with you. “Other products on the market that accomplish the same end result are, to be completely fair, easier to use,” Hines said. “But the drawback is they are 30 times more expensive and they won’t last nearly as long as the Bear Paw. How many disabled people, considering most are on fixed incomes, can afford a $4,500 device that will probably break down in a few years?”

So far, Hines said, the feedback for his device has been overwhelmingly positive. “I was fortunate enough to be in the right circumstances to hand deliver the very first one I sold,” Hines said. “The buyer was a mother with a daughter who has the same condition I have. We got together and the little girl was able to feed herself ice cream for the first time in her life. It was an amazing experience for everyone involved.”

For Hines and his customers, Bear Paw provides an indispensable service. “The Bear Paw may not be a million dollar idea but for the few who can gain independence from it, it’s priceless.”