My son Jack gets on kicks. Remember those Magna Doodle drawing boards? We had several minis (understatement!), because we couldn’t leave the house without one for what amounted to a large percentage of my son’s young life. One of the many reasons? Jack would use them as signs — he loves signs. He’d pretend that a walk we were on was a train ride, and he’d write each stop on the board. We’d pause along our way whenever we “pulled into the station.” 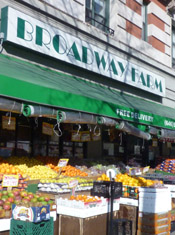 One of the sweetest (says his unbiased mom) was his cash register kick when he was about 6. He had calculators with rolls of paper that print out the calculations that are punched in, and they were his “cash registers.” Everyone who works at our corner grocer has known Jack his whole life, and they were charmed by his sincere desire to help out. “Jack’s going to help me ring up customers,” one would declare when they saw us enter. “Oh, no — he helped you last time. I need his help today,” another would say. And Jack would beam. He’d take his station alongside one of the cashiers, who would call out the prices to him as he or she was doing the actual ringing up of a customer’s items, and Jack would happily plug in the numbers and crow out the final tally. The cashier would quietly adjust that to account for tax and complete the transaction with the customer, and on they’d go to the next.

The other sweetest? Label makers, when Jack was 7 and 8. He’d print labels for people in the building and the neighborhood that were mini “gifts” to them, and he would beam when the recipient “got it” that he or she had just been gifted something precious.

Every year, he trick-or-treats with his dad, always in a very singular costume of his devising, and goes into stores in the neighborhood. “What are you this year, Jack?” or “Wow, Jack, that’s amazing,” are the common refrains. And we live in a building with a doorman now, where Jack sometimes likes to sit in the lobby with his LED sign reading “Welcome to Our Building.” The sign scrolls. It has three colors. It’s truly awesome. In case you hadn’t guessed by now, Jack is on the autism spectrum.

Don’t get me wrong — Jack is actually quite shy. He hates being in the spotlight with every fiber of his being. But as I hope you’ve gleaned by now, he seems to enjoy connecting and forging relationships with people as much if not more than anyone you’ll ever meet, and that tends to win out over his shyness — so long as he can engage in his own way.

There’s nothing shy about me, though, and I wind up getting asked a lot to speak with moms of children newly diagnosed as being on the autism spectrum. I recently spoke by phone with one such mom who said, “My 8-year-old son does a lot of things people find annoying, and they get irritated. I just don’t know what to do. He doesn’t mean any harm.”

I hear her loud and clear. Same here. Jack’s challenges aren’t always visible to the naked eye, and it can be easy for a stranger on the street to misinterpret them. As he gets older and wants to go places on his own, I worry that he’ll bump into someone and be scolded, or worse.

I had two answers for the mom on the phone. The first was obvious: As her boy gets older, teach him to advocate for himself. “I’m sorry — I wasn’t ignoring you. I have trouble with auditory processing and didn’t know you were talking to me. Can you please repeat that?”

But equally important, I believe, was my second answer, and it’s not one I’ve heard or read anywhere, which is why I’m writing about it now: This mom and her child’s dad need to get out there and actively build their son’s “village.”

A dear friend of mine lives in an actual village — a small seaside town, where nearly everyone knows her son, who is also on the autism spectrum. They’ve known him since he was born, so they really know him. In their minds, he’s one of theirs, and so they all adore him and look out for him. I don’t live in a small town, but my neighborhood in my big city is akin to one, and Jack’s dad and I made sure from the get-go that Jack’s neighbors knew him — really knew him — so that they, too, could truly “get,” appreciate and care about him.

Communities often rally around those they perceive as their own. I urged this mom of the 8-year-old to get him out there in ways he could tolerate and see to it he becomes familiar to those around him. And to fill them in about his diagnosis — engage their empathy, which can override their prior irritation. He’s a wonderful boy with many attributes, strengths and challenges. Let them see the full picture. I urged the mom to turn the people in her area from strangers into her son’s community, so that they, too, can see what she sees when she looks at and smiles on him. Yes, incidents with strangers will be unavoidable. But there could be far fewer strangers and far more people looking out for him as he grows older, far more people cheering him on. Far more people sincere when they say their version of our corner cashiers’ “No, you had Jack with you last time — I get him with me today!”

Rhona Silverbush wears a lot of hats. She is a writer, teacher and acting/Shakespeare coach in New York City, but her favorite and most important job is that of mom and stepmom. The first three books of &#8220;Terrific Toddlers,&#8221; a series of storybooks for toddlers that she has co-written with Carol Zeavin, will be released in the spring of 2018.