For parents of children with autism, keeping your kid fed can often be difficult. Keeping them fed around the holidays, however, is a task that comes with its own unique challenges.

Because of sensory issues, Kids on the spectrum can sometimes have seemingly peculiar eating habits and texture preferences. This can often make it a little difficult for parents to find a wide variety of food their kids will eat.

We asked parents of children with autism to share with us some of the most unusual, outrageous or funny food requests they’ve received from their kids at Thanksgiving.

These were their answers: 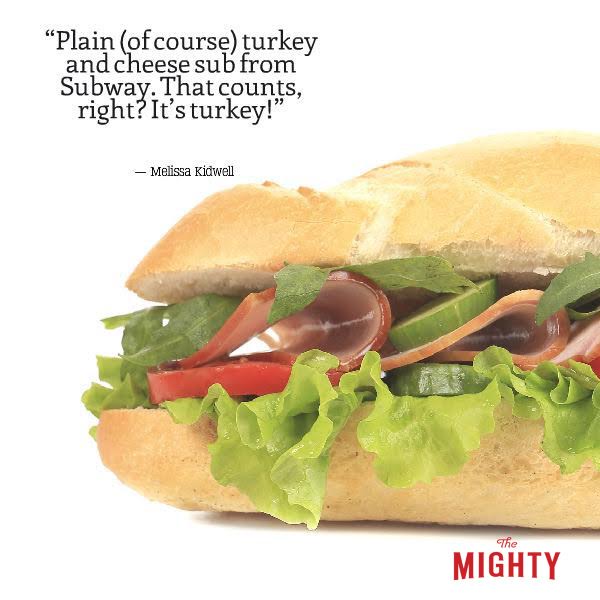 2. “One year I was quickly making mashed sweet potatoes with spices, brown sugar and what I thought was vanilla. Oops, it was green food coloring. When my daughter saw it, instead of refusing the green dish, she took some, adding, “I’ve never had slime before.” Every year she asks for slime!” — Jenifer Lapp McAllister

4. “For every holiday, everyone knows my son will only eat dill pickles so they stock up so he is able to fill up.” — Gail Bloker Sinram 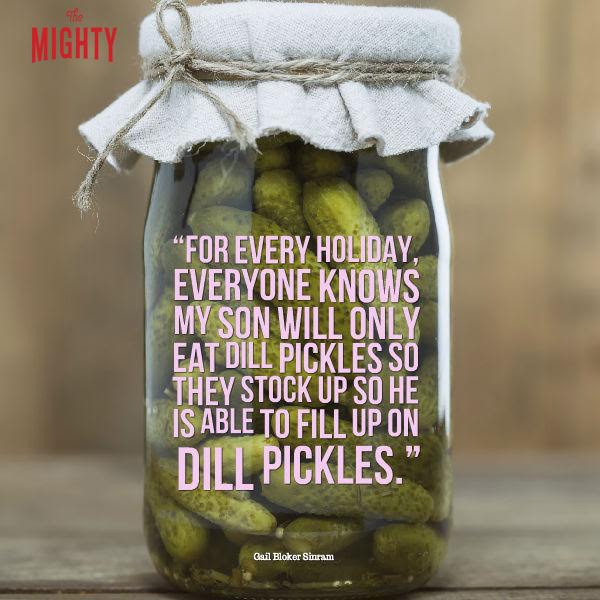 6. “My kid’s favorite thing is bread with ketchup. Not ketchup sandwiches, bread with ketchup. And has to be lumberjack bread. Never biscuits. Never, ever mashed potatoes. Over the years we’ve been able to get him to accept ham and avoid the bread with ketchup with the family, but soon as we get home, that’s his snack — six pieces of bread, ketchup in between two slices each. We love our boy.” — Amber Dixon

7. “A bowl full of cranberry sauce. Nothing else.” — Erin Howell Sharpe 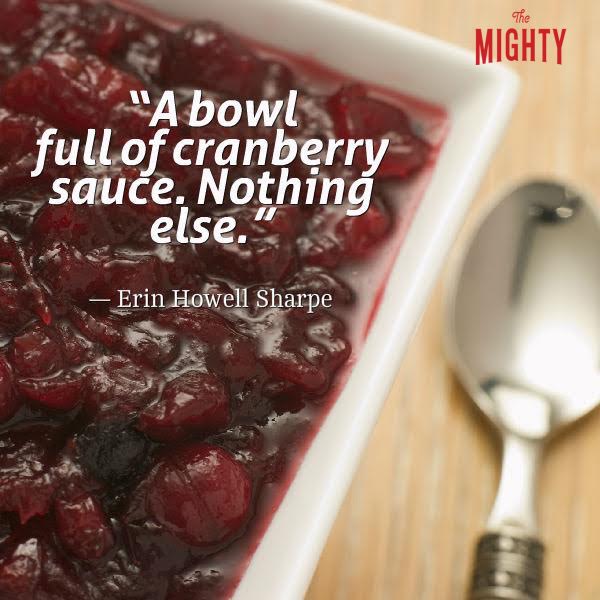 8. “Chinese food and pizza. It’s what she has every year. She hates turkey and all the other stuff. So, she gets chicken teriyaki on a stick, lo mein and a small pizza with breaded chicken and alfredo sauce from Pizza Hut every Thanksgiving while the family eats turkey and such.” — Lynn Major

10. “My son was obsessed with ‘Charlie Brown Thanksgiving’ — reading the book and watching the movie. He wanted their Thanksgiving meal, but he won’t eat popcorn or jelly beans so all he wanted was buttered toast like Snoopy. He was ecstatic when we gave him a plate of toast while the rest of us ate a full Thanksgiving spread.” — Rachel Frederick Hall 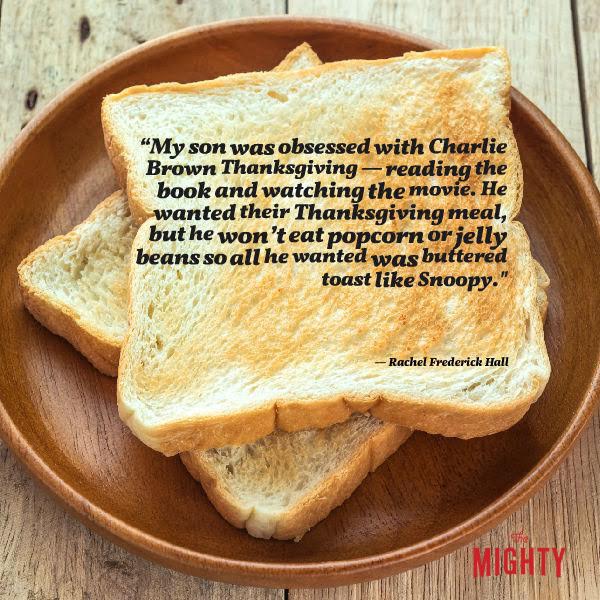 12. “Let’s be real we all know we’ll be making nuggets and fries.” — Kristy Lynn 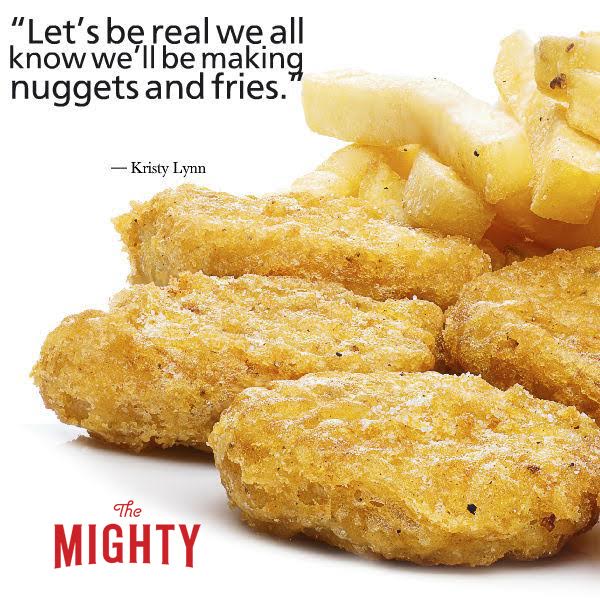 14. ” A Lunchable or English muffin with one slice of cheese and mayo! Hey, it’s his holiday too, so whatever makes him happy.” — Bonnie Pifer Stepke

15. “[My daughter] will only eat turkey if we refer to it as a ‘big chicken,’ and we let her dip it in Lighthouse blue cheese dressing. There is nothing else on the table she will even consider eating.” — Shari DeCarlo 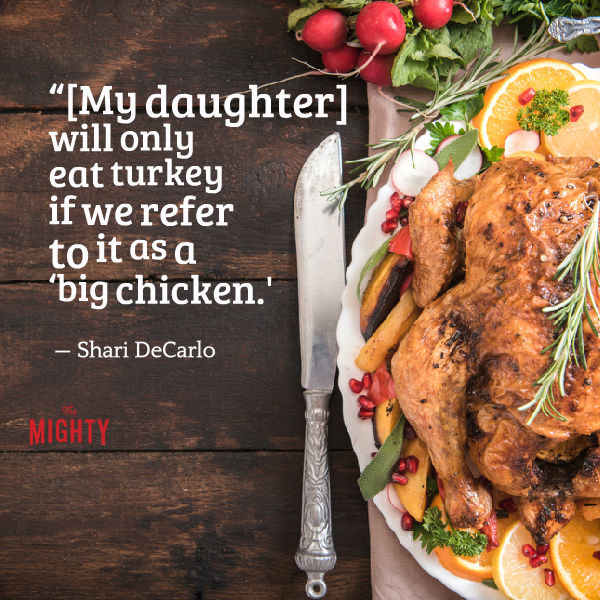 17. “Ketchup. In a bowl. With no utensils. We like to keep things simple…” — Megan Orine Campbell 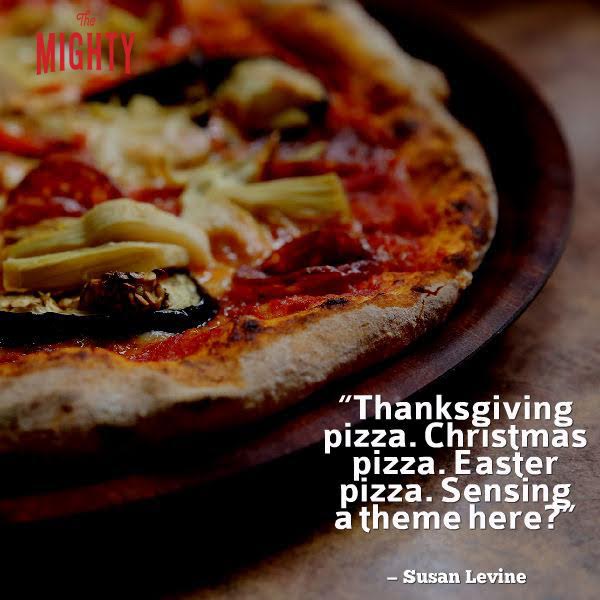 19. “My son stood up on the pew in the middle of our holiday church service (during the quietest part, of course) and screamed, “I want my ham!” I was mortified, but the nice elderly gentleman behind us leaned forward and whispered, “That’s OK, buddy. I want my ham, too!” — Karen Matthews 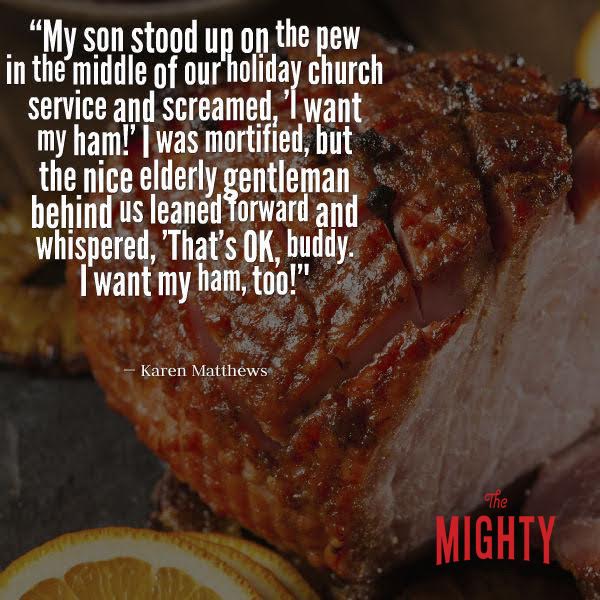