We are the first family who will tell you the joys of our son, Kreed, and the way he sees the world. We are also the family that will tell you how incredibly difficult it is and scary it is to have a child/adult with severe autism and the self-injury and aggression that goes along with it. Kreed can communicate, but he still can’t communicate prior to a meltdown.

Tonight… tonight my arms hurt so bad I can barely lift them. Kreed split his lip, bruised his head and cut up his hands. He wanted to damage himself to somehow help the pain elsewhere in his body (migraines and peripheral neuropathy). Not to mention his low blood sugars we are always battling. And it is a battle. We do battle every day. Every. Single. Day.

We don’t know which Kreed we will get. Sometimes it’s terrifying watching your son self-injure himself, and you wonder if you are strong enough to protect him from himself and know that you could get seriously hurt in the process. And we have. Been bit, bruised, cut, sliced — everything.

For some of us families, we not only have to parent and teach, but we also have to protect. Not protect ourselves, but protect our child from himself. This is incredibly difficult knowing part of your job is to provide that protection. In those moments we aren’t parents; we aren’t the ones kissing the boo boos or snuggling and finding joy. We are fierce and strong, and sometimes have to do things we never thought we would do or knew we would have to do for their safety. No parent wants to think of that. But we have to. We have no choice.

He’s our son. And we have moments of joy, and we focus on his quality of life and finding happiness. But some days his body is so racked with pain due to his medical issues that there is no joy to be found that day. Most people with Kreed’s set of disorders would probably tell you they are in immense pain every day, and just waking up and being present is enough. Kreed does so much more some days without a hint of pain. But other days he’s in so much pain, we do battle.

So today is not a fuzzy, loving, storytelling the joy we found today or what an interesting way Kreed sees the world. Today was about a battle. About his pain. About his lack of communication. About what severe autism sometimes looks like and what we families have to go through.

Even un-screwing the lid to his peanut butter jar brought me pain, and I didn’t think I could do it. Getting Kreed ready for bed was painful and long and hard. Because even after he rages and destroys everything in his wake, we still have to pick up the pieces and move on. We have to be the shoulder for him to cry on, even after he’s tried to harm us. The moment it’s over, it’s over. Then we can go back to being parents. Sometimes it’s easy giving that shoulder immediately. Other days it’s hard and you flinch, fearing a bite instead. The fear can get you some days. Everything can get you some days. Some days are a battle, and you don’t even know if you’ve won. And some days are exhausting, and you don’t know how you will get up the next day and do it all over again. But you do. You always do.

Tomorrow we will wake up and try again. We will try to manage his pain and find what makes him happy. We will tweak things and adjust things and hope he comes out with a smile instead of a punch. Because that’s what we do. We are there to pick up the pieces, to love, cuddle, hug and be there — but also to be incredibly strong, fierce and brave for your child.

We don’t know which kind of parent we have to be every day, but we always do it with love and show him as much love as possible. 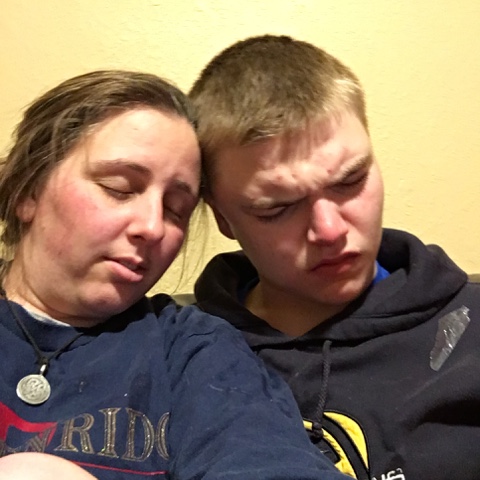 Editor’s note: It is with a heavy heart we share the news that Kreed passed away on May 8, 2016. Our hearts are with his family, and we’re so grateful to help keep his memory alive on our site. He was truly one of the mighty.

Erin Polk has a Master’s Degree in Education and is a Board Certified Behavior Analyst (BCBA). She also raises an 18 year old with autism, Kreed, who has multiple complex medical issues and is nonverbal, but uses an AAC device to communicate. She lives in Colorado along with Kreed and their three Labradors. Her passion besides raising Kreed is helping other nonverbal teens and adults communicate and empower parents to learn to help their children communicate and continue learning long past early intervention. She can be contacted through her blog or facebook at : www.kreedsworld.blogspot.com or www.facebook.com/kreedsworld