A Man Called My Son 'Retarded.' One Stranger Wouldn't Stand for It.

When my son Ryan was 5, his destructive behaviors escalated, and he always appeared to be crawling out of his skin. He was never still, never comfortable, never happy, never sleeping, always angry and extremely physically aggressive. He punched, hit, bit, spit kicked. We still have scars, both emotional and physical, from that time.

One thing that would temporarily soothe him was motion: riding in a car, a swing, being on a train or pulled in a wagon. The movement somehow helped center the frequent sensory explosions that came at him from the world.

One day, I took him to a mall; they had a train set up for kids, and I wanted to see if he would enjoy it. Part of me was desperate for Ryan to experience some “typical” activities other children his age engaged in. I intentionally selected a day during the week, when it would be less crowded. I was greeted in an incredibly harsh way by the gentleman running the train — let us call him “Caldwell.” Caldwell looked tired and angry and was not the type of person who should be interacting with children. I should have listened to the maternal instinct inside of me that recognized the emotional red flags, but getting Ryan out of the house at that time was such an exhausting accomplishment, I stubbornly decided, mean man or not, my son would ride that train.

As soon as the train started, Ryan started stimming. For those who don’t know, self-stimulatory behavior, also known as “stimming” and self-stimulation, is the repetition of physical movements, sounds or repetitive movement of objects — common in individuals with developmental disabilities but most prevalent in people with autism. In Ryan’s case, when he’s happy, he flaps his arms, bounces up and down and makes loud sounds. 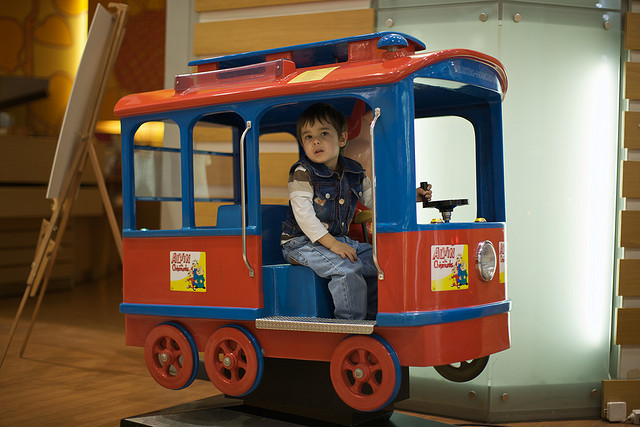 The second Ryan started bouncing, Caldwell ran (literally ran) over to him (as the train was moving) and screamed at him to sit down. At first Ryan didn’t realize Caldwell was directing this verbal attack at him, but it happened repeatedly until finally his tone and close proximity scared Ryan, who immediately started to melt down.

I’ve been able to exhibit patience and professionalism in the face of adversity many times in my life — this was not one of those occasions. I ran like hell towards my son, grabbed him off the moving train (Caldwell was now yelling at me) and waited until the ride was over. When it was, I approached him with my screaming child in my arms, who was at this point pulling my hair, biting my face and crying in sheer terror. I explained to him that Ryan had special needs and he was excited to be on the train; his bouncing was stimming, which meant that for a few minutes, he was comfortable and happy. I wanted to try putting him on the train again, but Caldwell said no. His words and I quote: “Retarded kids shouldn’t be riding my train.”

It was one of those surreal moments where the room stops and things go silent. I couldn’t absorb his words and kept thinking, “Did he really just say that?” When I came to, the Jersey girl inside of me exploded, and I lost it. I wasn’t patient or professional in my delivery.

Ryan continued his aggression as a small crowd emerged. This was before cell phones or all of this would have gone viral on You Tube, and while I felt humiliated and wanted to leave, I also felt paralyzed. Caldwell walked away from me while I was screaming at him, and I just sat on the floor and started to cry — I mean really sloppy crying. This only exacerbated Ryan’s emotional breakdown. Boy, were the two of us a sight. I still have the scar on my leg from where he accidentally kicked me and drew blood.

It was at this moment that a woman came over to me. Let’s call her “Madison.” She hadn’t seen what had happened but saw me on the ground sobbing with a hysterical child in my arms and blood coming through my pants. Madison sat down next to me and started talking in a soothing voice to me but all the while looking at Ryan. She told me in this soft, hypnotic voice that she was the mother of a child with cerebral palsy. She had a couple of hours to herself each day, and she often came to the mall. As she told us her story, she handed Ryan some chips, and he began to calm down, and I told her what happened. She stood up, took my hand and led me right to the general offices in the mall. Madison demanded to see a manager and told him the story of Caldwell and Ryan and the train incident. The manager instantly retrieved Caldwell, demanded he apologize to me and told me he would be “severely reprimanded.” I, of course, insisted he be fired and threatened to call my attorney.

The manager handled me well. He told me he could only imagine how hard things were and how hurt my feelings must be. He gave me his business card, a $100 mall gift card, patted Ryan on the head (FYI: Never do that to a child with autism) and told me to please come back to the train and give it another try anytime and for free.

Madison stayed with me through this ordeal, and when we said goodbye she said something I will never forget: “You can’t expect people who don’t experience the pain we do on a daily basis to get it the way we do. Only other parents like us can truly empathize.”

I didn’t recognize it at the time, but in this one traumatic event, I experienced both sympathy and empathy. Caldwell was a terrible person, the mall manager sympathized with the situation, and Madison knew how to help me because she was able to experience true empathy for me.

Madison’s words have stuck with me over the years as I often find it difficult to empathize with people in situations that don’t rise to the level of autism. It’s difficult to get to the pain of someone who’s complaining about something I see as routine. It becomes isolating for a special needs parent to be around parents of “typical” children because everyday conversations come up and you can’t participate. Bring up the Caldwell and the train story at a playdate and you can only imagine how awkward it becomes. Sympathy, pity, discomfort all over the place — but not empathy.

As a teacher and school administrator I felt a special connection to my students and families affected by disabilities. Some would say at times I favored them — that was my empathy shining through. As a special needs attorney, I will organically empathize with clients and families, and I believe that will enable me to serve them at a deeper level. Dr. Daniel Goleman, a famous psychologist and author on “Emotional Intelligence,” wrote that “a prerequisite to empathy is simply paying attention to the person in pain.” I try to do this each and every day with everyone I encounter. It comes naturally to me in some situations and is more challenging in others. But I pay attention to people’s pain.

Madison taught me to seek out my fellow special needs warriors and be there for them. I pay her empathy forward as often as I’m able to. I urge anyone reading this to pay attention to the special needs families in your own communities, at your schools, at your restaurants and especially those melting down publicly somewhere at a mall, grocery store or Target. We’re everywhere, and if you show the slightest bit of kindness towards us, even if you can’t quite understand our pain, we will never forget it or you.

The Mighty is asking the following: Describe a moment you were met with extreme negativity or adversity related to your disability and/or disease (or a loved one’s) and why you were proud of your response — or how you wish you could’ve responded. If you’d like to participate, please send a blog post to community@themighty.com. Please include a photo for the piece, a photo of yourself and 1-2 sentence bio. Check out our Submit a Story page for more about our submission guidelines.

Save
Conversations 55
We use cookies and related technologies to help identify you and your devices, enhance your experience and conduct advertising and analysis. By choosing "Accept", or by using this site, you are agreeing to our use of cookies. You can read more about how The Mighty uses cookies in our Cookie Notice.
Manage Choices
Accept